Cambodia awaits payday as Hun Sen cozies up to China BANGKOK -- "A friend in need is a friend indeed" is a slogan likely to be repeated by China and Cambodia long after the coronavirus pandemic has abated.

Those were the words of Chinese President Xi Jinping as he towered over his ally, Cambodian Prime Minister Hun Sen, at the Great Hall of the People in Beijing in February.

China was battling the worst of the virus when the Cambodian strongman arrived to show his support -- the first foreign leader to do so since the outbreak. The period may have been bleak, but for Hun Sen the meeting marked a moment of triumph. It conveyed a message of unshakable solidarity, and as China emerges from the ravages of the pandemic the gesture is beginning to pay dividends.

By the end of February, Cambodia was one of the only countries in Southeast Asia that had resisted pressure to impose a full or partial ban on Chinese travelers to stem the spread of the coronavirus.

Standing shoulder to shoulder with China during times of adversity has become a running theme with Hun Sen. But during this pandemic Hun Sen's loyalty became even more apparent as he sought to play down fears of the virus. In the lead-up to the meeting with Xi, Hun Sen insisted on flying to Wuhan to visit Cambodian students stranded there, a move rejected by China due to safety concerns. He also dismissed the idea of evacuating Cambodian students and diplomats, and berated journalists for wearing masks at his news conferences.

Hun Sen's readiness to score points early on in the pandemic, before China was able to contain it, is telling, says Sebastian Strangio, a political analyst focused on Cambodia and Southeast Asia.

"Hun Sen's support of China has been driven by political expedience -- a desire to communicate his support to a valued patron -- rather than any impartial assessment of the efficacy of China's response to the virus," he says.

Since China largely brought the virus under control and began reopening factories, it has donated medical supplies to some of the worst affected countries.

Yet in the case of Cambodia -- a country with a population of about 16.25 million that so far has had reported only 122 cases and no deaths -- the aid and personnel being given appear as much a bid to bolster the health system as a reward for loyalty.

According to Chinese media, Cambodia became the first Southeast Asian country to receive supplies of medical aid and personnel on March 23. A chartered China Southern flight from Shanghai via Nanning flew aid to Phnom Penh before going on to deliver supplies to Bangkok. The packages came with messages in both Chinese and Khmer: "Let's watch and help each other, China and Cambodia work together."

In March, Hodo Group, a Chinese clothing maker with operations in Cambodia, sent 200,000 masks, the first batch of a pledge of 1 million masks. Earlier that month, a group of medical experts arrived in Phnom Penh and was received personally by the health minister at the airport. A nearby banner read: "A friend in need is a friend indeed."

Shanghai Zhongzhi Garment, a clothing manufacturer, had sent its raw materials for processing to its Cambodia factory when the outbreak in China forced it to close. The move was hailed as a "miracle" by the Cambodian commerce ministry, as the country's factories had seen a dramatic slowdown in production. 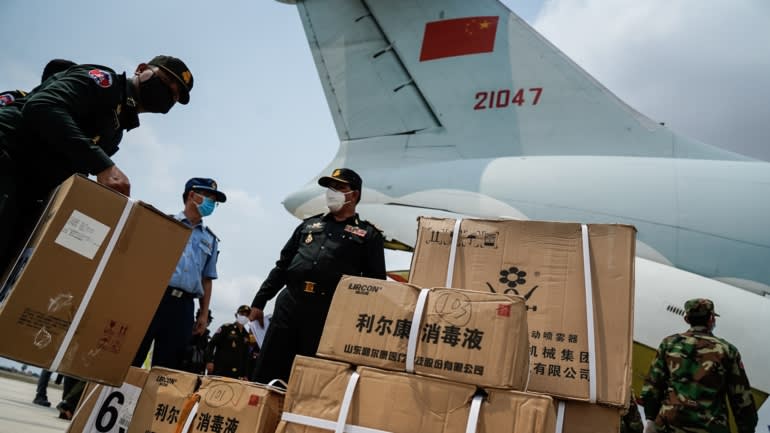 Like countries around the world, Cambodia has seen its foreign direct investment dry up due to the pandemic.

"Many Chinese restaurants in Phnom Penh have closed, [and] the real estate market has cooled down," says Hiroshi Suzuki, chief economist at the Business Research Institute for Cambodia.

Yet there are encouraging signs that business will pick up.

According to a flight schedule published in Chinese media, there will be 10 flights per week between Beijing and Cambodia in the summer and autumn period, the busiest route after Thailand, which will be connected to Beijing by 12 flights per week.

Wolfgang Georg Arlt, founder and director of the China Outbound Tourism Research Institute, says Chinese tourists are likely to look upon Cambodia more favorably than they did before as a result of Hun Sen's show of support.

"What can clearly be said is that in China the government as well as the travelers will look positively at destinations which showed empathy and support during Jan/Feb when the deaths were still concentrated in China," Arlt says.

"So after it becomes possible again to travel for leisure in the Asia-Pacific Region -- I assume sometime in May -- Cambodia will be one of the countries which will see a new wave of Chinese visitors, maybe bigger than before," he adds. 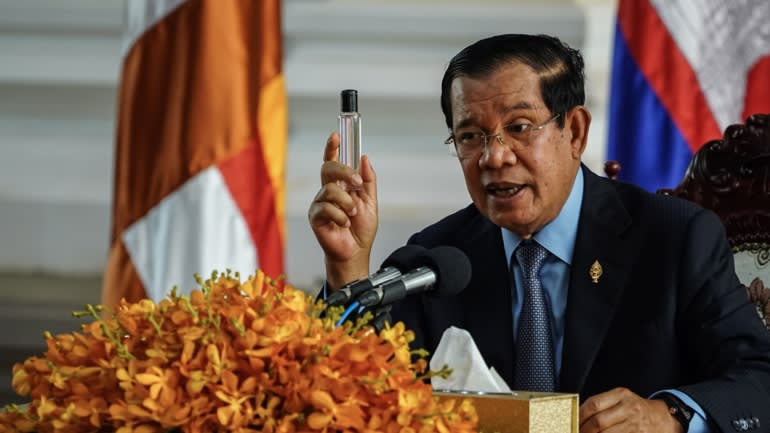 Georg Chmiel, Executive Chairman of Juwai.com, an international real estate portal for Chinese, says the two countries' reaction to the crisis "won't be as simple as Chinese consumers buying real estate as a quid pro quo," but it bodes well for future business.

"More likely is that good ties between the two governments will lead to more cross-border commercial and infrastructure investments, perhaps more favorable visa arrangements, and other practical changes in the relationship that create conditions that favor property investment by individual Chinese."

Yet, money trickling back into Cambodia seems a way off. The world remains in turmoil as the virus claims lives and devastates economies.

And with limited testing and a government that has repressed non-official accounts of the pandemic, Cambodia must convince the outside world that it has the virus under control.

"At the moment the world outside of China looks dangerous for Chinese," said Arlt.

For Hun Sen, the real payoff will come when his goodwill is converted into cash, whenever that may be.