SIHANOUKVILLE, Cambodia -- The booming Cambodian property sector is facing intense scrutiny this week after a building under construction by Chinese developers collapsed, killing 28 workers sleeping inside.

The seven-story building caved in just before 5 a.m. on Saturday in Sihanoukville, a once sleepy coastal city radically transformed in recent years into a casino-resort town by a Chinese-driven construction rush.

Survivors said about 50 workers were inside when the building collapsed. Twenty-six people were injured, including two men pulled alive from the rubble on Monday afternoon.

Among those to escape was Mao Sopheap, 20, who said he and his cousin crawled through an opening created by metal beams that landed atop one another. His father and another cousin, who were sleeping in a different room on the second floor, did not make it out.

"I lost my father, a love of my life," he told the Nikkei Asian Review at a nearby hospital. "He was on the other side of the building."

The Chinese Embassy on Monday released a statement calling for a "thorough investigation" and any "necessary" legal measures.

Speaking at the site on Monday night, Cambodian Prime Minister Hun Sen announced the end of the rescue mission and said officials would now determine who was responsible. Workers continued to clear the wreckage on Tuesday morning, using excavators and cranes to pick through piles of twisted metal and concrete. Several told Nikkei they did not expect to find more victims.

Two senior officials have already lost their jobs over the collapse, including the provincial governor, who resigned, and the head of the National Committee for Disaster Management, who was sacked.

While expressing "regret" for the disaster, the premier also lashed out at critics linking the tragedy to heavy Chinese investment.

"I publicly condemn any raising of China's investment issue to accuse the government of being a puppet of China," Hun Sen said in a speech broadcast on Facebook.

"It has become the opposition's politics ... whether it is Chinese, American, English, or French; once the incident happens, it's the same. So, do not accuse this nation or that nation," he said. "What matters is that we gather all investors into Cambodia, but we must comply with Cambodian laws." 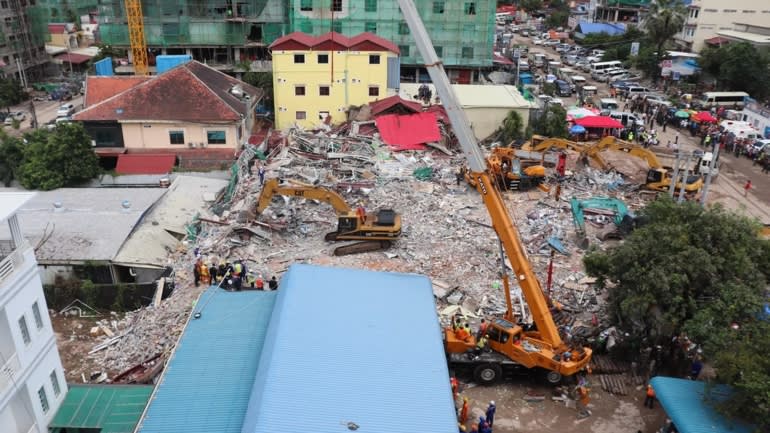 The site of the collapse is seen from an adjacent hotel in Sihanoukville. (Photo by Shaun Turton)

While Hun Sen has aligned himself closely with Beijing, securing billions of dollars in Belt and Road infrastructure projects, the increasing Chinese presence has fueled local resentment, nowhere more so than Sihanoukville, the epicenter of the influx.

Residents complain they receive few benefits from the slew of hotels and casinos that now dominate the skyline and cater exclusively to Chinese visitors.

"This will make the government wake up a little bit and make sure they are following regulations, walking through these buildings and have professionals their side," O'Sullivan said.

Officials have said the company did not have a building permit, with authorities claiming they tried to stop the project twice.

Critics say they find that hard to swallow in a country notorious for corruption. A 2016 World Bank report on business in Cambodia found 87% of 373 companies had paid a bribe at some point in the process of obtaining a building permit.

Sok Kin, president of the Building and Wood Workers Trade Union Federation of Cambodia, said the situation was inexcusable.

"What capacity do we have to control foreigners who carry out business in Cambodia?" he said, calling for all parties involved, including authorities, to be held accountable.

"After the incident everyone runs around [and] tries to help but they only pay attention when people die."

Speaking at the scene, a provincial official who asked not to be named said the developers had added an extra two stories on to engineers' plans for the project.

He also said photos from the building before it collapsed appeared to show low-quality material and supports had been used.

"They were trying to save money," he said.

The government has since announced a task force to investigate the quality of buildings under construction in the province of Preah Sihanouk.

Speaking while watching search teams work on Monday, Chung Veasna, a construction manager who said he had worked at several sites around Sihanoukville, estimated 30% of building sites in the city used similar, low-quality materials.

"If it happens once like this," he said, "it can happen again."