PHNOM PENH -- Preparations are underway for a China-backed expansion at Cambodia Ream Naval Base, a facility the U.S. fears will be transformed to host Chinese military assets.

A top Royal Cambodian Navy official told Nikkei Asia on Saturday that the Chinese government was supporting a project to expand the port and develop a ship repair facility at the base on the Gulf of Thailand.

Vann Bunlieng, a three-star vice-admiral, deputy commander and chief of the navy general staff, said the plans include dredging work to deepen the waters surrounding the base, which can currently only accommodate smaller vessels.

"The Chinese government helps us to build a port and repair facility for our ships," Bunlieng said.

Bunlieng said the new facilities will save Cambodia money on ship repair should it acquire larger vessels. He said they could also be used to service private vessels to generate revenue. It comes as new satellite images published by the Center for Strategic and International Studies on Friday show that a building at the site -- which had been built with U.S funds -- was demolished last month.

"The recent demolition seems to confirm that changes are underway at the naval base and again raises questions about rumored Chinese access," CSIS wrote.

The building was one of two U.S.-funded facilities at the base cited in a letter from Pentagon official Joseph Felter to Cambodia's Minister of Defense Tea Banh last year.

Felther, the U.S. deputy assistant secretary of defense for South and Southeast Asia, had suggested Cambodia's flip-flop on a plan to upgrade the facilities could indicate an intention to host Chinese military assets.

His letter was followed by a report in the Wall Street Journal of a secret deal between Cambodia and China for the latter to use the Ream base for 30 years.

Bunlieng again rejected reports that the base would be used by the Chinese military. Both Cambodia's prime minister and Chinese officials have denied the existence of such plans.

The recently demolished building, which was likely knocked down in mid-September, according to CSIS, was previously the tactical headquarters of the National Committee of Maritime Security. 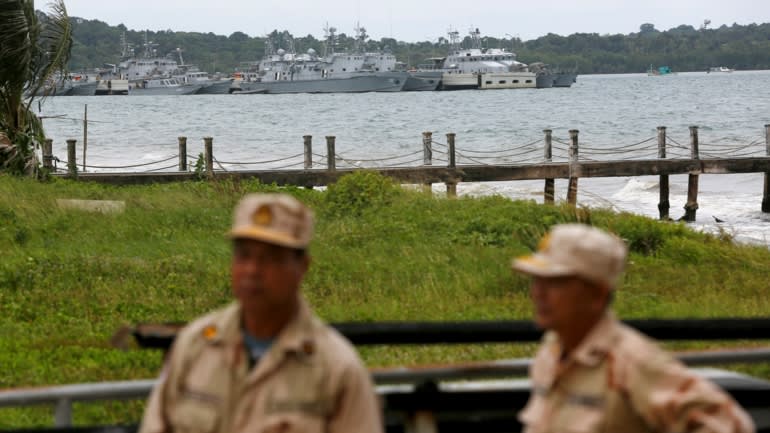 In this photo from July 2019, sailors stand guard at Cambodia Ream Naval Base in Sihanoukville, Cambodia.    © Reuters

A nearby U.S.-funded building, which remains standing, houses small patrol vessels donated by the U.S. to the Cambodian navy.

The NCMS was moved out of the base entirely. A groundbreaking ceremony at their new headquarters, about 20km north of Ream, was held in May this year, according to Facebook posts.

Plans to upgrade the base with Chinese help were previously published by the China Metallurgical Group Corporation, a state-owned enterprise.

In a statement on its website, which appears to have been taken down but remains accessible via a cached version, MCC Group said in June 2016 it had signed a "cooperation framework agreement" with Cambodia's defense authorities for a "Port Expansion Project."

The expansion project was to expand a "navy military base." It included adding 5,000 tons of dry dock and 1,500 tons of side-launching mechanical slipway.

The work would also outfit the quay, build a repair workshop and add 7.4 hectares of reclaimed land. The current status of that agreement is unclear. A Chinese-built patrol boat at Cambodia's Ream Naval Base. A Wall Street Journal report said China and Cambodia have signed a secret pact that allows Beijing to use Ream for 30 years. (Photo provided by Shaun Turton)

Bunlieng referred questions about which company was involved to the Ministry of National Defense. Minister of Defense Tea Banh and the ministry's spokesman were unreachable this morning.

In its post accompanying the satellite images, CSIS also pointed to the fact that large tracts of land surrounding the base had been leased by Chinese companies for planned resorts.

This included nearby dredging and land reclamation work for the Canopy Sands resort development, which is about 5km north of the base at Ream Bay.

The project's backer is the Prince Group, a sprawling Chinese conglomerate active in multiple sectors in Cambodia, including property and banking.

The project's land reclamation work, which so far covers about 40 hectares at Ream Bay, has been contracted to China Harbour, a subsidiary of China Communications Construction Company, which was recently sanctioned by the U.S. for its involvement in building islands in the disputed South China Sea.

"But with current facilities at Ream Naval Base only able to host small patrol ships, any large port development nearby bears watching," CSIS noted.