China is Canada's second most important bilateral relation after the US, but ties have deteriorated since the end of 2018. (Source photos by AP and Reuters)
JULIET O'NEILL, Contributing writerOctober 15, 2019 18:15 JST | North America
CopyCopied

OTTAWA -- Beijing's application of pressure on Canada since the arrest last December of Meng Wanzhou, the chief financial officer of Chinese telecom group Huawei, presents a significant challenge to whoever wins the Canadian federal election on Oct. 21.

China's reprisals have demonstrated what former diplomat Guy Saint-Jacques calls "the dark side" of Canada's most important bilateral relationship after that with the United States.

Among Beijing's responses have been the detention of two Canadians in China on charges of spying, the imposition of the death sentence on an alleged Canadian drug smuggler and costly de facto bans on Canadian imports to China of canola, beef and pork.

"It's a terrible crisis for us," David Mulroney, former Canadian ambassador to China, said in an interview with the Nikkei Asian Review.

Canada must protect its international credibility by continuing to follow the rule of law, as it did by arresting Meng, despite the high price being exacted by China, he said. "Once you surrender that, you don't get it back."

Mulroney and Saint-Jacques, also a former Canadian ambassador to China, call for a reappraisal of relations between the two countries whether the Liberal government of Prime Minister Justin Trudeau is reelected, or if it is defeated by Andrew Scheer's Conservative Party. Scheer accuses Trudeau of lacking resolve toward China and has called for "a reset" in relations.

The relationship has deteriorated amid fears there will be a violent crackdown by China in Hong Kong, which is home to about 300,000 Canadians. Recent months have seen widespread protests and unrest in the city, sparked by a now-cancelled law to extradite criminal suspects for trial in mainland China.

Beijing's reach into Canada has been periodically visible in Vancouver when groups waving People's Republic of China flags tried to disrupt solidarity rallies in support of Hong Kong's pro-democracy movement. More than 1.7 million Canadians are of Chinese descent.

Meng was arrested on Dec. 1, 2018, at the behest of the United States. Washington is seeking her extradition to New York where she, Huawei and subsidiary Skycom face bank fraud and other charges related to alleged violations of U.S. sanctions that prohibit the provision of financial services to Iran. Huawei chief financial officer Meng Wanzhou, who is out on bail and remains under partial house arrest, wears an electronic monitoring bracelet on her ankle in Vancouver on Sept. 23.   © AP

Meng, the daughter of Huawei CEO Ren Zhengfei, is under house arrest at her mansion in Vancouver, while lawyers are contesting the actions of police and border officials in detaining her. The extradition hearing is scheduled for January.

In what Mulroney calls "a grotesque parody" of the rule of law, within weeks of her arrest China increased a 15-year prison term to the death sentence for Canadian Robert Schellenberg for drug smuggling and detained two Canadians -- former diplomat Michael Kovrig and businessman Michael Spavor -- on accusations of spying.

This so-called hostage diplomacy has been condemned by the U.S., the U.K. and other Canadian allies. Trudeau has emphasized how unacceptable it is to use "arbitrary detention" to achieve political goals and that other countries are "worried about China engaging in the same kinds of pressure tactics with them."

In March China halted the import of canola seed from two Canadian companies and imposed enhanced inspections on others, claiming there were pests in the crop. Canada took this matter to the World Trade Organization in September, which critics say was a belated move. The Canadian Meat Council says the longer China's suspension of its beef and pork imports lasts, the harder it will be to regain market share.

Though exports of Canadian wheat to China have soared due to the Sino-American trade war, advocates of Canadian trade diversification to other Asian markets such as Japan, South Korea and Taiwan warn of overdependence on the canola market.

"So long as China is willing to hold our exports hostage, all while committing human rights violations, we have no choice as Canadians but to consider other trading partners," Scheer said in a keynote foreign policy speech. "And fortunately, we have alternatives. Like-minded democracies in the Indo-Pacific region, for example, some of which desperately need more secure access to energy, are ideal economic and political partners for Canada." 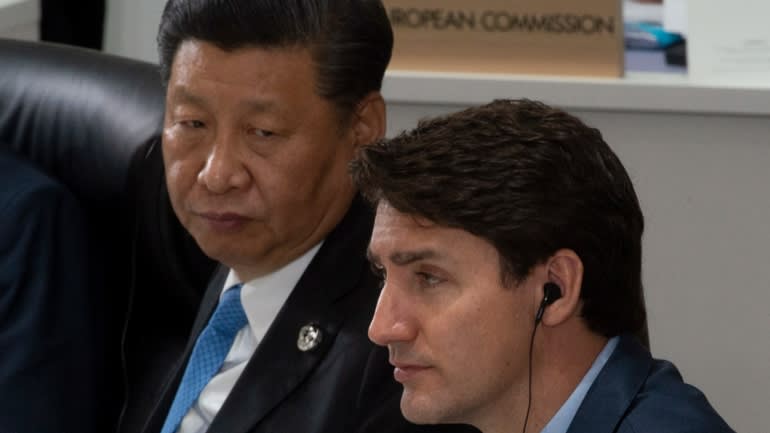 Scheer has called for Huawei network equipment to be blocked from Canada's 5G telecommunications network, a policy on which Trudeau has declined to give a decision.

Scheer also advocates withdrawal from the Asian Infrastructure Development Bank, into which Canada has pledged $256 million and sits on the 12-member board. Saint-Jacques counsels against withdrawal, as the bank is a stable multilateral organization that can benefit Canadian companies.

Polls less than two weeks before the election showed Liberals and Conservatives tied, with potential for a minority parliament; either side could win just enough seats in the House of Commons to attempt to form a government with support from one or more smaller parties.

In a campaign debate among party leaders, Yves-Francois Blanchet of the Bloc Quebecois said Meng's arrest might have been "a big mistake."

"When you're facing a powerful foe like China, you don't try to show biceps if you have only tiny biceps," he said.

While no leader responded, Saint-Jacques begged to differ. "I don't think Canada showed its biceps, but laid on the ground and was kicked at," he said in an interview with Nikkei. Among other potential actions he cites are a review of Chinese investment in Canada to ensure national security is not threatened, a redirection of government resources that have been earmarked for the purpose of forging deeper links with China, and the expulsion of Chinese diplomats.

Along with the Bloc Quebecois, smaller parties that could have clout in the next parliament are the Greens, if they increase the two seats they held when parliament was dissolved, and the New Democratic Party, which held 39 seats and could conceivably hold the balance of power.

NDP leader Jagmeet Singh is the first non-white federal leader in Canadian history. Born in Canada to immigrants from Punjab, he is a Sikh who wears turbans in bright colors including hot pink.

Singh's deft handling of racism on the campaign trail has been widely noted, and his affable demeanor during a debate on Oct. 7 boosted his popularity. However, he has been criticized for failing to forcefully condemn a provincial law in Quebec banning teachers, police and some other public officials from wearing religious symbols such as turbans, kirpans or hijabs.

There have been renewed references to Trudeau's embarrassing trip last year to India, during which he was ridiculed for wearing inappropriate Indian attire. This has resurfaced during the election campaign, with Trudeau embarrassed by the publication of offensive photos and a video from his past -- which he himself has admitted were racist -- showing him wearing 'blackface' makeup at costume parties.

No matter who wins the election, Canada's conflicts with China will take many months, if not years, to resolve.