MOSCOW/NEW YORK -- In the first high-level ministerial contact since a deadly border skirmish in June, Chinese Defense Minister Wei Fenghe and Indian counterpart Rajnath Singh met in Moscow on the sidelines of a regional summit Friday to discuss reducing tensions.

India and China have mobilized entire divisions of troops, backed by armor, artillery, gunships and even fighter jets, in the largest mobilization in the region since the countries went to war in 1962 over disputed territory in the western Himalayas.

Russian media reported that the two officials spoke at a hotel in central Moscow after a meeting of the Shanghai Cooperation Organization, whose eight members include China, India and Russia.

Indian media reported that Singh spoke of the importance of nonaggression in the presence of his Chinese counterpart. A tweet by Singh described "a climate of trust and cooperation, non-aggression, respect for international rules and norms, sensitivity to each other's interest & peaceful resolution of differences" as necessary for a peaceful, stable and secure SCO region. Chinese and Indian forces clashed along the disputed border in the Himalayan region of Ladakh in June, killing at least 20 Indian soldiers. An indeterminate number of Chinese casualties were also reported. Tensions remain high in the area, with another clash breaking out in August as Indian troops moved to occupy strategic vantage points on what the government claims as its own side of the Line of Actual Contact -- the de facto demarcated boundary in the absence of an international border -- in a bid to "thwart" what it sees as further Chinese incursions and infrastructure constructions in its territory.

"Since the clash in June, the Indians needed a quid pro quo to counter China, and by moving into this area [Pangong Tso], they finally got it," said New Delhi-based author and editor Sandeep Unnithan, who watches India's military.

"Clearly, the Indian side miscalculated what the Chinese were up to in the summer and paid for it," Unnithan said. "But it seems that they've recovered." 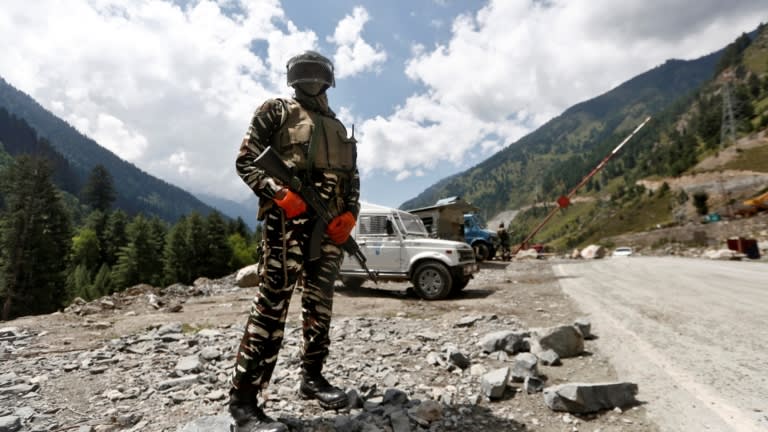 An Indian reserve police officer stands guard at a checkpoint on a highway to Ladakh. Tensions remain high on the border with China.   © Reuters

Indian strategic analyst Brahma Chellaney tweeted: "Indian Army chief says the border situation is very tense but his forces are prepared. China thus far has never waged war when the foe was ready and prepared. It has launched a lightening war when the foe least expected an attack and when the international timing was propitious."

New Delhi has taken a number of sustained measures to push back against Beijing since the flare-up in the disputed region of Ladhakh: visa and import restrictions, bans on Chinese apps, and curbs on the entry of Chinese telecommunications hardware giant Huawei Technology into India' 5G wireless sector, along with the carrying out of naval exercises with the U.S. in the Indian Ocean.

Asked at a news conference Friday whether he thinks China is bullying India, U.S. President Donald Trump responded: "I hope not. I hope not. But they're certainly going at it. They're going at it much more strongly than a lot of people even understand."

Trump has offered to help mediate a solution to the Sino-Indian border dispute.