KARACHI -- China has signed a defense pact with Pakistan, its old ally, in response to a recent information-sharing pact between India and the U.S.

Unlike the U.S.-India defense arrangement, details of the China-Pakistan pact have not been made public. However, analysts believe it contains new commitments to intelligence-sharing that will help Pakistan track the movements of Indian forces across their tense shared border.

Pakistan made clear the importance of Wei's visit to mutual defense arrangements by bestowing a prestigious national award on him, the Nishan-e-Imtiaz, which is given for outstanding service to the country.

The military diplomacy follows the signing at the end of October of the Basic Exchange and Cooperation Agreement for Geo-Spatial Cooperation by New Delhi and Washington, which gave India's armed forces access to a wealth of data from U.S. military satellites. 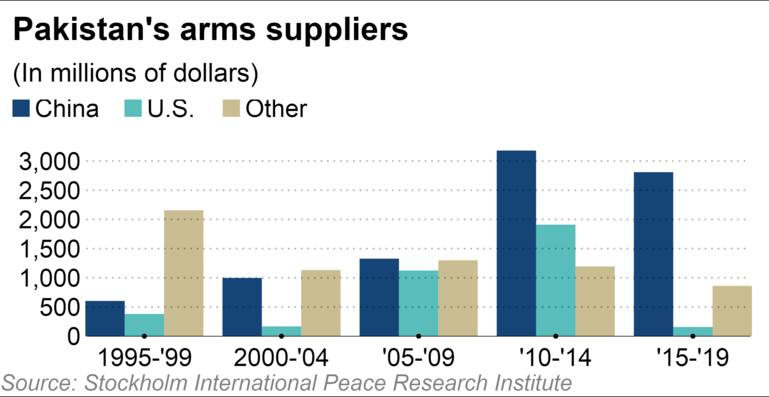 Senator Anwaar ul Haq Kakar, a government ally, said the MOU "will counter the onslaught of India backed by the U.S. and it will give more confidence to Pakistan that in its hour of need Beijing will stand with Pakistan." He said the understanding draws Pakistan further into China's orbit as their economies and security interests become more intertwined.

It was also announced that the Pakistani and Chinese air forces will conduct a large joint exercise called Shaheen IX before the end of December. Its predecessor, Shaheen VIII, lasted a fortnight and involved some 50 warplanes, including fighter jets and early warning aircraft, which participated in battle simulations. Shaheen IX is expected to be bigger in all respects.

"The U.S.-India agreement will strengthen New Delhi's military capacities to monitor Pakistan-based threats," Michael Kugelman, deputy director of the Asia Program at the Wilson Center, told Nikkei Asia. "The China-Pakistan agreement can be viewed as an effort to reduce some of the imbalance in strategic stability in the region prompted by the U.S.-India deal." China has recently stepped up defense cooperation arrangements with Pakistan in a robust security alliance that dates from the 1960s.   © Reuters

But that might not be enough to put India and Pakistan on an even footing. "America's sophisticated, high-quality surveillance and intelligence-related technologies may be of greater quality than China's," said Kugelman.

China has backed Pakistan in defense matters since the 1960s, and the latest development is an extension of that alliance. "Without any doubt, China is signaling its support to Pakistan against India," Jeremy Garlick, an assistant professor of international relations at the University of Economics in Prague, told Nikkei. "China has been committed to supporting Pakistan for decades, and it is indicating that its position is unchanged."

During his visit, Wei expressed satisfaction with security provided to infrastructure projects in the second phase of the China-Pakistan Economic Corridor (CPEC), a $50 billion component in China's Belt and Road Initiative. Behind the scenes, the Chinese may not be so sanguine, however, since troop increases and other security measures have not prevented occasional raids.

"China will worry about the security issue so long as its projects and the Chinese personnel working on them continue to be attacked," said Kugelman. "Still, security concerns will not prompt Beijing to scale back its investments in Pakistan."