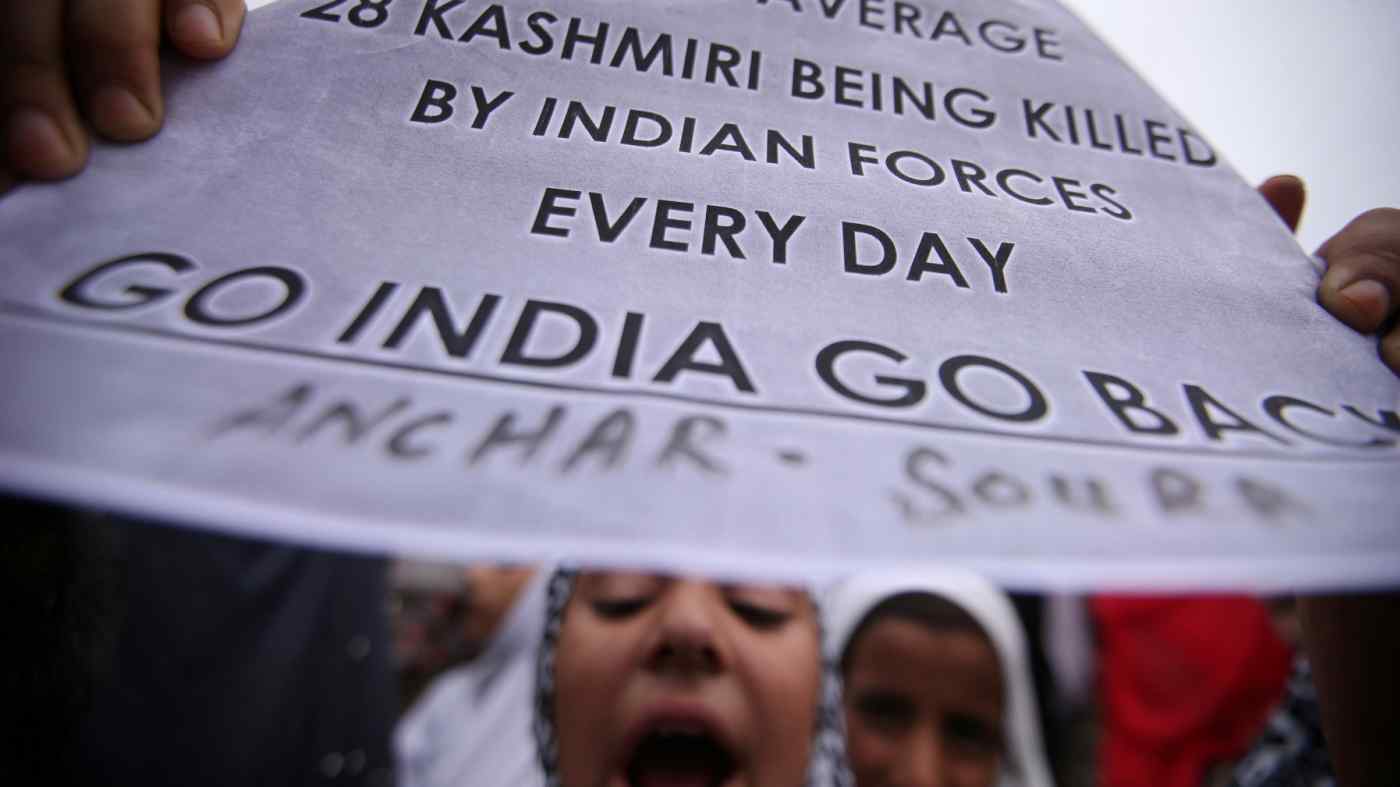 A Kashmiri girl displays a placard as she shouts slogans at a protest after Friday prayers during restrictions after the Indian government scrapped the special constitutional status for Kashmir, in Srinagar on Aug.16.   © Reuters
August 17, 2019 07:28 JST | India
CopyCopied

UNITED NATIONS (Reuters) -- U.N. Security Council members believe India and Pakistan should refrain from taking unilateral action over the disputed region of Jammu and Kashmir, China's U.N. envoy said on Friday after the council met on the issue for the first time in decades.

The 15-member council met behind closed doors at the request of China and Pakistan after India removed the decades-old autonomy the Muslim-majority territory of Jammu and Kashmir enjoyed under the Indian constitution. China rarely requests Security Council meetings.

India's U.N. Ambassador Syed Akbaruddin said the decision was an internal matter and that the country was committed to ensuring the situation remained "calm and peaceful."

China proposed that the Security Council issue a statement on the situation in Jammu and Kashmir, but diplomats said the United States, France and Germany objected. Such statements are agreed by consensus.

China's U.N. Ambassador Zhang Jun summed up the council discussions, describing serious concern over the situation. No other Security Council members spoke publicly after the meeting.

"They are also concerned about the human rights situation there and also it's the general view of members that parties concerned should refrain from taking any unilateral action that might further aggravate the tension there since the tension is already very tense and very dangerous," Zhang said.

Akbaruddin accused Zhang of trying to pass off his remarks as "the will of the international community."

In response to a question about human rights, Akbaruddin said: "If there are issues, they will be discussed, they will be addressed by our courts; we don't need international busybodies to try and tell us how to run our lives. We are a billion-plus people."

The Himalayan region has long been a flashpoint in ties between India and Pakistan, which both have nuclear arms. U.N. Secretary-General Antonio Guterres has called on the two countries to refrain from any steps that could affect Jammu and Kashmir's special status.

Telephone and internet links were cut and public assembly banned just before India revoked the special status of Jammu and Kashmir earlier this month. The top state official said authorities would begin restoring some telephone lines in the region on Friday night.

Zhang said "it's obvious that the constitutional amendment by India has changed the status quo in Kashmir, causing tensions in the region" and called for the issue to be resolved through peaceful means according to the U.N. Charter, Security Council resolutions and bilateral agreements.

Pakistan's U.N. Ambassador Maleeha Lodhi described her country's push for Friday's Security Council meeting as "the first and not the last step." She said it was the first time in more than 50 years that the council had taken up the issue.

"The fact that this meeting took place is testimony to the fact that this is an internationally recognized dispute," she told reporters. "The people of Jammu and Kashmir may be locked up ... but their voices were heard today at the United Nations."

The Security Council adopted several resolutions in 1948 and in the 1950s on the dispute between India and Pakistan over the region, including one which says a plebiscite should be held to determine the future of mostly Muslim Kashmir.

Another resolution also calls upon both sides to "refrain from making any statements and from doing or causing to be done or permitting any acts which might aggravate the situation."

U.N. peacekeepers have been deployed since 1949 to observe a ceasefire between India and Pakistan in Jammu and Kashmir.