China closes in on US backyard in 'global game of go' 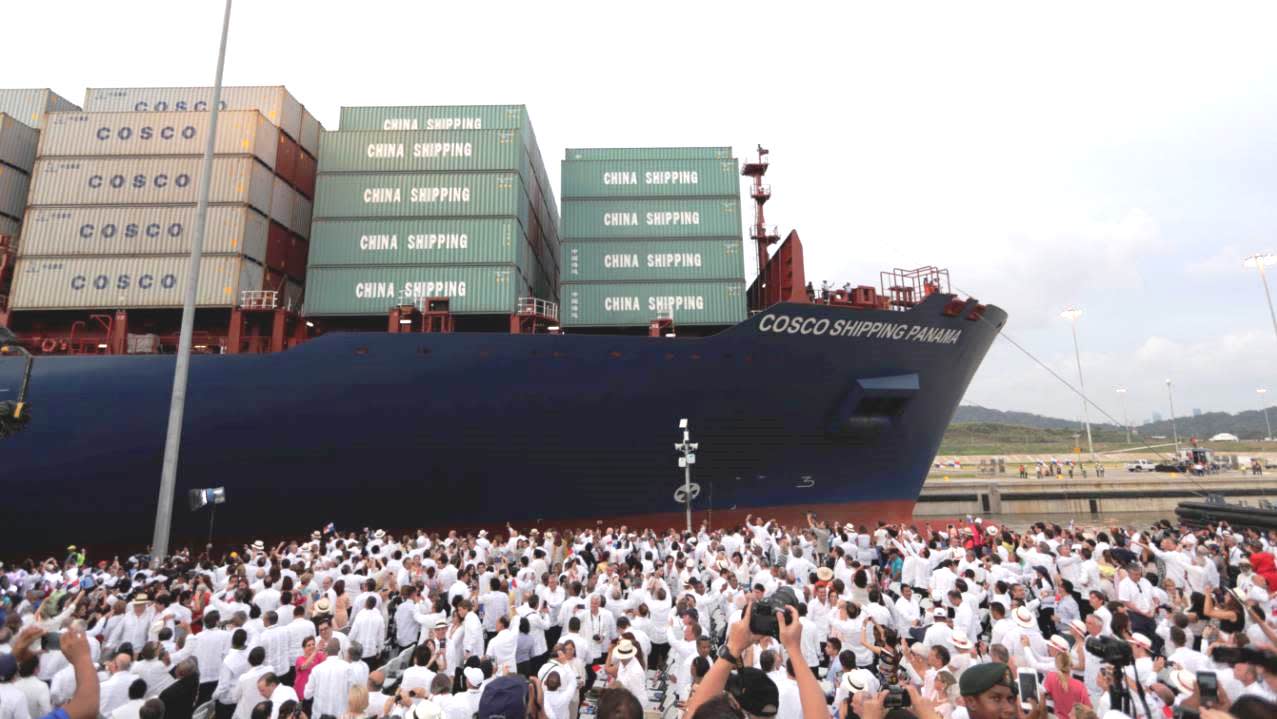 People wave at a Chinese COSCO container vessel, after crossing the Panama Canal to the Pacific side, during its first ceremonial transit of the new Panama Canal expansion project in Cocoli on the outskirts of Panama City in June 2016.    © Reuters
ARIANA KING, Nikkei staff writerOctober 23, 2018 02:29 JST | Latin America
CopyCopied

NEW YORK -- On a sunny day in July, a delegation of Taiwanese trade officials was invited to visit the El Salvador Coffee Council for a taste test of a freshly brewed cup of the Central American country's choice beans.

Taiwan was already a willing buyer -- the sixth-largest importer of Salvadoran coffee beans in 2017, according to the U.S. Department of Agriculture -- and the trip presented an opportunity to show off Taipei's warm relations with El Salvador, one of the self-governed island's few remaining allies.

It wasn't until a month later that notes of a bitter aftertaste were revealed, when El Salvador announced that it was ditching its diplomatic ties with Taiwan in favor of a relationship with China.

Soon after, China's state-owned Xinhua News Agency declared that Beijing's own coffee bean diplomacy was brewing. A Sept. 10 article cited the head of the El Salvador Coffee Council as saying that trade is expected to pick up between the two countries, with coffee topping the list of exports.

El Salvador is just one of a string of countries over the past few years to decide that Chinese investment had more to offer than an alliance with Taiwan. In this case, it was the appeal of Chinese funding for the revitalization of its port in La Union.

And the small Central American nation had good reason to believe an alliance with the Chinese was in its best interest.

"I would guess that the money that China is willing to offer to these countries is a lot greater than what Taiwan or the U.S. together can offer," said Richard Bush, a senior fellow in Taiwan studies at the Washington-based Brookings Institution.

There was next to no backlash from the U.S. after Panama severed ties with Taiwan in 2017, despite the geopolitical risks of Chinese influence over the operator of a major choking point for world trade. Burkina Faso and the Dominican Republic also cut ties this year and hardly left a ripple.

Yet it was El Salvador's defection that struck a nerve and prompted a scathing U.S. response.

"The El Salvadoran government's receptiveness to China's apparent interference in the domestic politics of a Western Hemisphere country is of grave concern to the United States, and will result in a reevaluation of our relationship with El Salvador," the White House said in an Aug. 23 statement shortly after the Salvadorans made the switch.

"The United States will continue to oppose China's destabilization of the cross-Strait relationship and political interference in the Western Hemisphere," the statement said. Ultimately Washington decided against taking any concrete action in retaliation, but the sharp criticism for El Salvador suggests that the U.S. has smelled the coffee and has come to see China's isolation of Taiwan and the accumulation of allies in America's backyard as serious threats.

The defection of El Salvador to China comes as Washington is mired in what experts have likened to a game of geopolitical go, in which China is incrementally gaining influence over countries across the global board. Though known more commonly by its Japanese name, go, the ancient strategy game has its origins in China, where it is known as "weiqi" -- the encirclement game.

Since President Donald Trump took office in January 2017, the U.S. has proclaimed a strategy of "America First," prioritizing U.S. interests and cutting spending abroad, both on aid and investment.

Trump's "doctrine of patriotism" -- which he touted during a speech to the U.N. General Assembly, in opposition to "the ideology of globalism" -- "damages American power indirectly, by making it less attractive to allies and potential partners," wrote Oriana Skylar Mastro, a visiting scholar at the American Enterprise Institute, a think tank in Washington.

The Trump administration appears to be quietly opening its wallet. Earlier this month, the U.S. tapped the Overseas Private Investment Corp. -- an agency Trump had previously sought to cut funding for -- to establish a new $60 billion fund for development projects as a counter to China's Belt and Road infrastructure initiative. It is also investing $113 million in digital economy, infrastructure and energy in the Indo-Pacific region.

The U.S. has also -- after Trump's suggestions that the country could live without a deal -- entered into a free-trade agreement with Canada and Mexico, which includes a provision aimed at preventing the countries from entering into separate trade pacts with China.

In an interview with Nikkei, Republican Congressman Ted Yoho, chairman of the House subcommittee on Asia and the Pacific said that the White House was fully supportive of the bill that set up the $60 billion development fund. Such development funding not only allows the U.S. to "take an investment stake in that country, but, at the same time, promote the Western values."

Yoho lamented China's foray into countries like Sri Lanka and El Salvador, suggesting that China goes "into these countries that have a weak government, they offer a lot of money, people take the money. But then they become indebted to China."

According to Evan Ellis, a China expert and professor of Latin American studies at the U.S. Army War College, China's endgame is a strong, unified country in "a global system in which they are basically in control and there is a flow of wealth to them at the imperial center from the periphery."

"China is playing a global game of go," Ellis said. "If China dominates the port of La Union, if China builds other positions elsewhere ... from those commercial positions you can project a lot of political leverage and do other things."

"Latin America, which is farthest away from the expansion of Chinese power, maybe is transformed the least," Ellis said. "But you see it. You see it in the attitudes of countries like El Salvador," which chose to ignore the demands of the U.S.

Ultimately, however, Ellis warned that while China's economic maneuvering in the Western Hemisphere, such as its investment in La Union, does not signal imminent preparation for a military conflict, that acquisition of influence could come back to haunt the U.S., should there be one.

"We, in our hubris today, like to think that nobody would dare to bet against the United States in a global military conflict -- nobody would ever dare allow the use of their facilities to the Chinese -- because that's just unthinkable," Ellis said.

"But I would say in the type of world we're moving towards it's not unthinkable. We just can't wrap our minds around the way China looks to people outside of the United States," he warned, suggesting that investment in La Union sets the foundations of a working relationship with El Salvador and familiarity with the port and the potential for military use in the event of a conflict.