ISLAMABAD -- When Pakistani Prime Minister Imran Khan began a high-profile trip to Beijing on Tuesday, he was closely shadowed by influential army chief Gen. Qamar Javed Bajwa. But while Khan met with senior Chinese leaders and businessmen, Bajwa was being received by senior army generals, an indication of the close defense ties between the countries.

Those ties are so close, in fact, that China is helping Pakistan become a defense exporter that sells arms to countries like Myanmar and Nigeria.

Pakistan has relied on Chinese military hardware for more than five decades, though Islamabad has used every opportunity to also gain access to Western defense equipment, notably from the U.S.

Pakistan's leaders have long lamented their country's lukewarm ties with the U.S., which have sometimes resulted in reduced arms supplies. This contrasts to the situation with China, which has gradually but consistently nurtured Pakistan as a close ally.

Similarly, Chinese hardware is allowing Pakistan to expand its navy.

According to senior government officials who spoke to the Nikkei Asian Review, in the past year Pakistan has redoubled its push to sell batches of JF-17 Thunder fighters that it has built with Chinese assistance. Pakistani government officials said the JF-17 Block III, a version of the JF-17 that will be rolled out in 2020, will include more advanced radar, additional weaponry and other new technologies. 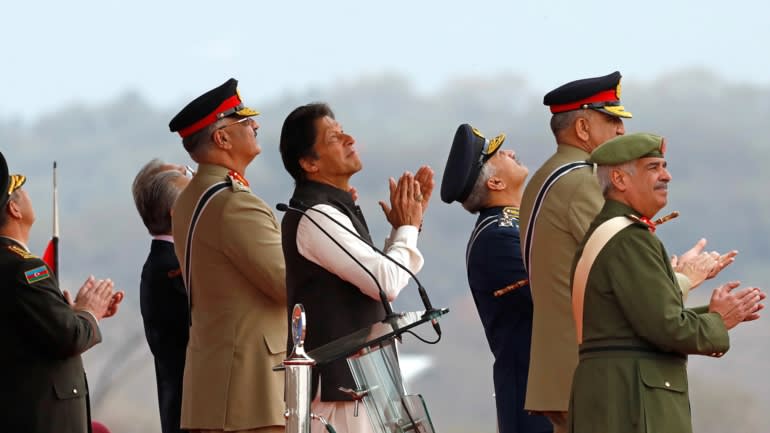 Prime Minister Imran Khan, center, applauds as he observes a flyby by a Pakistan Air Force JF-17 Thunder jet during a military parade in Islamabad on March 23.   © Reuters

In December, the Myanmar Air Force for the first time released pictures of four JF-17s that it had purchased to replace aging fighters. The deal was facilitated by China, which gave the country credit to eventually acquire 16 JF-17s. Though a price tag has not been disclosed, sources told Nikkei that the sale of the 16 fighters along with spare parts is worth $400 million.

"Affordability and high quality are the main selling points of the JF-17," said retired Air Marshal Shahid Latif, a former Pakistan Air Force general previously involved with the JF-17 production project. Encouraged by the publicity given to Myanmar's purchase, Pakistan in the past year has discussed future sales to Malaysia and Azerbaijan as well as sales of additional fighters to Nigeria, which now has three JF-17s.

Mushahid Hussain Sayyid, a leader of Pakistan's opposition PML-N, or Pakistan Muslim League-Nawaz, said another factor is now motivating Beijing to cooperate with Pakistan militarily -- India's revocation of autonomy in its part of Kashmir.

"In August this year, when India controversially changed the status of [part of] Kashmir, China was also concerned given that the change affected Ladakh," said Sayyid.

China controls part of Kashmir as well, and Ladakh, which some analysts say has a sizable Buddhist population, borders China's Tibet Autonomous Region.

China has other reasons to counter India.

"The Chinese believe that the U.S. and other Western countries are trying to build up India militarily," said a senior foreign ministry official in Islamabad who spoke on condition that he not be named. "In response, the Chinese have tried every available opportunity to build up Pakistan [militarily]."

In the coming years, Pakistan's reliance on Chinese military hardware will grow. China has signed a contract to supply eight new submarines to Pakistan's navy, the largest defense deal ever between the countries. Although neither party has revealed the value of the contract, Western defense analysts say it could be worth from $4 billion to $5 billion depending on weapon systems and other add-ons.

The contract calls on China to supply four submarines to Pakistan's navy by 2022 and build another four at a shipyard in Karachi, the southern port city that overlooks the Arabian sea and the Indian Ocean.

A Western diplomat based in Islamabad who spoke to Nikkei on condition of anonymity said the Sino-Pakistani relationship is anchored primarily on defense and security cooperation and that this cooperation is the key to holding Pakistan and China together.