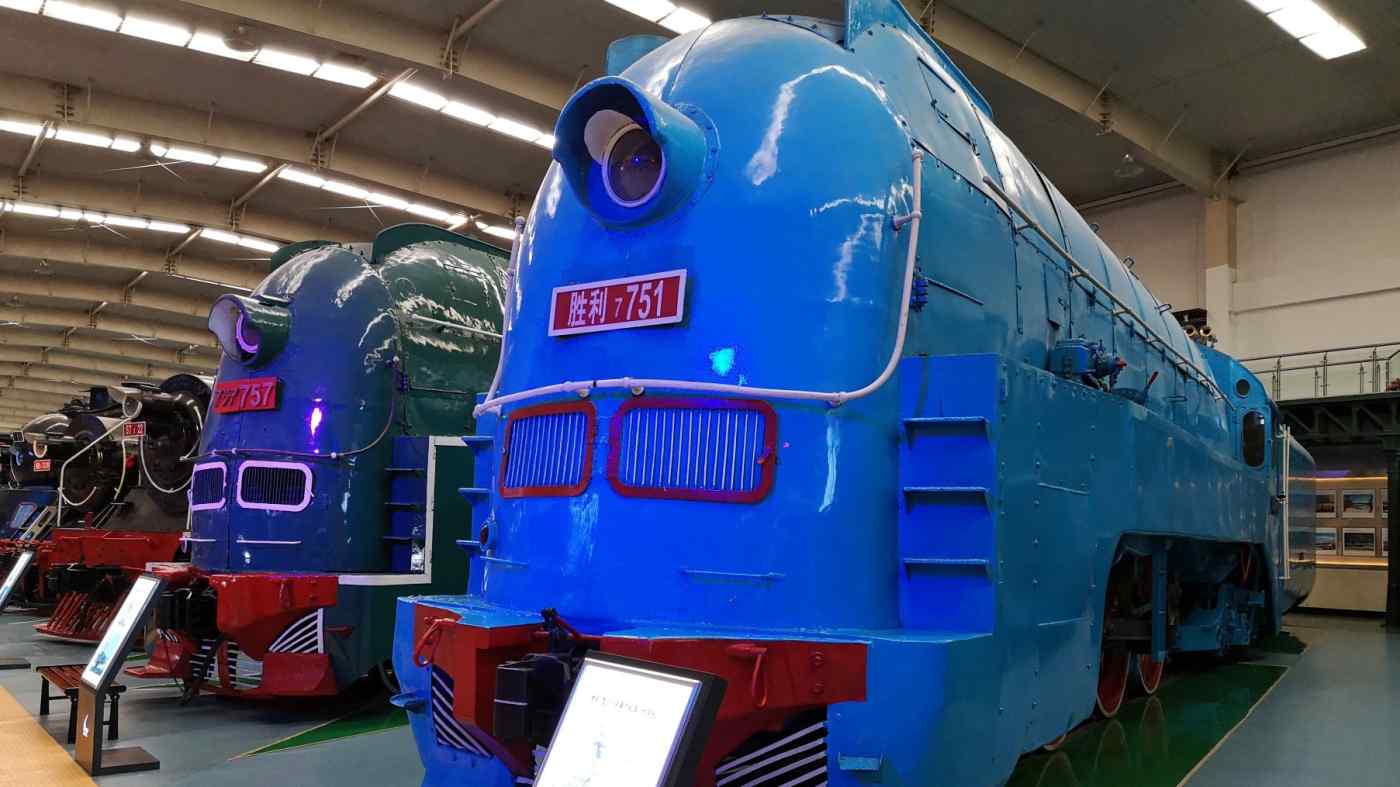 The two steam engines in front are the only remaining ones that Kawasaki Heavy Industries built in the 1930s for the iconic Asia Express. (Photo by Shin Watanabe)
SHIN WATANABE, Nikkei staff writerAugust 19, 2020 10:46 JST | China
CopyCopied

"I knew I was attracted to this place when I first came here," said Li Junpeng, the restaurant's manager. "You very rarely see a building that looks like a villa with a private garden in central Dalian."

In fact, the city's vestiges of a bygone era, one marked by pain and bitter memories, are disappearing from Dalian just as more locals gain an appreciation for them.

They are markers of Manchukuo, a puppet state in the northeastern area of China of the Japanese Empire established in the early 1930s.

This month marks the 75th anniversary of the end of World War II. While Chinese people still have complex emotions toward Japan's past colonial rule, municipal leaders, private businesses and individuals are now showing that they intend to protect the architectural and other treasures that survive from that troubled period.

Li's seafood restaurant occupies a renovated building originally built in the 1930s by a young architect from Japan who was studying in Manchuria. A seafood restaurant now occupies this house designed by a young Japanese architect in the 1930s. (Photo by Shin Watanabe)

The two-story concrete abode has what appears to be a tiled roof and features a circular window on one side of its front facade. Its design borrows Western and Japanese aesthetics. The garden, which completely surrounds the handsome home, includes trees believed to have been planted when the structure was built. Before the war, a Japanese merchant lived in it. After the war, it is said that Dalian's vice mayor resided there.

When he first stumbled upon the old house, Li had no particular idea about what kind of business to turn it into but decided to rent it anyway. The municipal government owns the old house and maintains its outer walls as repairs are necessary nearly every year.

Nine other Manchukuo era buildings stand in Zhongshan Square, in central Dalian, some of which were originally used as banks and municipal government offices. The most prominent of them is the Dalian Hotel, which features Renaissance-style architecture. The Yamato Hotel chain, operated by the South Manchurian Railway, built the hotel in 1914.

The project was taken on by Shimizu Gumi, the predecessor to Japanese contractor Shimizu. The building still exudes a stately character, but the hotel stopped accommodating travelers in 2017, when it suspended operations. The Dalian government plans to renovate the old edifice and reopen the hotel, although it is yet to work out a specific schedule. According to a municipal official, the government is kicking around the idea of soliciting cooperation from Japanese construction executives.

The former Mitsukoshi department store building, completed in 1937, still has a retailer tenant, Zara, the fast-fashion empire out of Spain. Located at the center of a concentration of commercial facilities, the building sports a modern appearance, with a tower protruding from the roof.

The hotel and retail structures have been given a designation that qualifies them for protection and prevents them from being demolished. This is why at least one of them remains in use, and why they are treated with care and receive necessary repairs.

After defeating Russia in the Russo-Japanese War in 1905, Japan leased Dalian, controlling it as a colony for four decades until 1945. This control expanded to the northeast to include Fengtian, known today as Shenyang, and Hsinking, now known as Changchun. Architectural reminders of Japan also remain in these old cities. 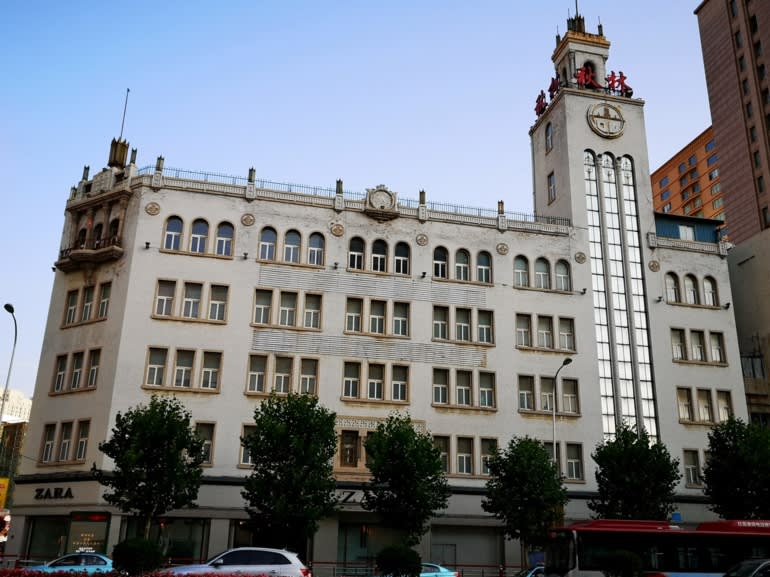 The old Mitsukoshi Dalian department store is now home to a Zara fast-fashion emporium that attracts a lot of female shoppers. (Photo by Shin Watanabe)

But there are other reminders as well. In Shenyang, the provincial capital of Liaoning Province, located to the north of Dalian, is a museum that displays railway vehicles. Upon entering the Shenyang Railway Exhibition Hall, the first thing visitors notice is a steam engine painted in bright blue and another in green.

The engines used to pull the carriages of the iconic Ajia-go Asia Express, operated by the South Manchurian Railway. Dalian and Shenyang were among its stops. Rail buffs regard the steam engines as must-see artifacts. They were put on display in May 2019 by a private-sector company.

"Twelve of these engines were made at a Kawasaki Heavy Industries plant in Japan and a rail car plant in Dalian, and these two are the only ones that have survived to this day," a female museum staffer said. "Both were made in 1934."

The engines could reach speeds of up to 130 kph and were imbued with the most advanced rail technology Japan possessed at the time. They measure about 26 meters in length, and each wheel has a diameter of 2 meters.

It is currently difficult for Japanese sightseers to visit China due to restrictions brought on by the coronavirus, but the engines were especially popular with middle-age and senior Japanese travelers last year.

Although they are enjoying a resurgence of interest, pieces of Manchukuo era handiwork are decreasing in number as they age. Ji Ruguang, a writer studying Dalian's architectural history, estimates Dalian had 5,000 to 6,000 Japanese-related buildings in August 1945, when the war ended. The figure decreased to between 1,200 and 1,500 by 2010. About 800 remain today.

Large buildings, including government offices, hospitals and banks, have been protected, but private homes are being demolished.

Ji, however, is cautiously optimistic that the current municipal leadership will continue protecting many of the remaining architectural statements. He points out that Dalian's party chief, Tan Zuojun, who assumed the post in 2017, is relatively warm toward the idea of preserving still-standing pieces of the city's history. "I believe few of them have been demolished since 2017," Ji said.

For Chinese, the occupation and rule by Japan is an especially painful part of their country's era of humiliation. A 20-something corporate employee in Dalian, Li, says the structures built during Japan's colonial rule remind him of the ache. "Chinese should not forget that history," he said.

But the injurious past does not inhibit him from taking selfies in front of the architectural monuments of the era. "You can take a very cool photo in front of these old buildings," he said with a smile.

On weekends, many couples, the women in long gowns and men in tuxedos, have their wedding pictures taken in front of the Japanese-era buildings in Zhongshan Square. The man has taken part in the tradition. He is well aware of the buildings' legacies but appreciates their beauty.

Ji, the writer and architecture historian, says the classical structures left behind by the Japanese are "part of Dalian's history. ... We don't distinguish between Japanese and Chinese buildings when it comes to protecting historical buildings of great cultural value."