One of the most-discussed missing pieces to the puzzle for planners in Beijing is amphibious lift capability -- the ability to move equipment and personnel across the Taiwan Strait and unload off the main island's rugged coast.

Another Yushen-class ship was launched in January and is currently undergoing sea trials, while new vessels are being constructed around the rate of one every six months. But the ongoing expansion of China's amphibious lift capability is not limited solely to naval vessels.

Large ferries recruited from China's civilian fleet were used in naval exercises held both last summer and in July, suggesting that Beijing could use non-military vessels to leapfrog its current amphibious transport bottleneck.

In a Jamestown Foundation report published last month, Conor Kennedy, an instructor at the China Maritime Studies Institute of the U.S. Naval War College, used open-source research to highlight the movements last summer of a Chinese ferry, the Bang Chui Dao. Kennedy's research highlighted what may be the first attempt by China to convert a commercial ferry into an amphibious vessel for military purposes.

Ferries typically can only load and unload vehicles at ports, but the Bang Chui Dao had been retrofitted with a ramp that enables vehicles to roll on and off at sea -- an ability that Chinese state television highlighted in multiple news reports on an amphibious exercise in southern China's Guangdong province.

"A surge in PLA landing ship construction would be expected before serious preparations for a cross-Strait invasion," Kennedy wrote, referring to China's People's Liberation Army. "This would be exposed to ship spotters and overhead imagery over the course of many months and has not yet been observed. Nevertheless, the testing of new ramp systems as seen on the Bang Chui Dao could offer the PLA a potentially fast and cheap method of surging amphibious lift capabilities without raising concerns."

The Allied invasion of Normandy in World War II was the biggest amphibious invasion ever, with more than 150,000 soldiers crossing the English Channel to France. For China to overrun Taiwan's military, which could potentially be aided by the U.S. and Japan, and take control of the democracy of 24 million, even more troops would be needed. Given that the Taiwan Strait is roughly five times wider than the English Channel, delivering as much equipment and personnel in the first wave would be crucial to Chinese success. The Bang Chui Dao ferry collects an amphibious assault vessel in this screenshot from the Jamestown Foundation report, which was taken from CCTV's military channel.

Just days after Kennedy's report was published, Thomas Shugart, an adjunct senior fellow at the Center for a New American Security, tweeted a thread using information from the website Marine Traffic showing two large Chinese ferries that normally operate in China's north anchored off the same amphibious training site where the Bang Chui Dao had operated with PLA naval vessels the summer before.

One of the ferries, the Bo Hai Ma Zhu, is more than 2.5 times larger than the biggest civilian ferries used in the U.S. -- the Jumbo Mark II ferries used by the Washington State Ferries system. The other ferry, the Huadong Pearl VIII, is even larger. Shugart estimates that China's civilian vehicle carriers represent more than 1.1 million tonnes of potential vehicle and troop transport ships.

For perspective, Shugart notes that is more than three times the roughly 370,000 tonnes of China's entire fleet of amphibious assault ships. Furthermore, Hong Kong has an additional 370,000 tonnes of civilian vehicle carriers, which could potentially be enlisted under the new National Security Law.

"The revelation that China appears to be modifying at least some of its large ferries to be able to send amphibious assault forces directly onto the beach casts China's large fleet of roll-on/roll-off ferries in a very different light," Shugart told Nikkei Asia. "What looked before like mostly civilian vessels that, at best, might be used to transport PLA forces to captured or temporary ports, now could have the ability to send first-echelon forces directly ashore in the first wave of an invasion."

Using modified ramps on ferries to test the ability of civilian ships to deliver large numbers of amphibious tanks serves two purposes for Beijing, said Shen Ming-shih, a research fellow at the Institute for National Defense and Security Research (INDSR) in Taipei.

"This makes up for the shortcoming China has in large amphibious ships," Shen said, "but it also sends a message that China is ready to attack now if Taiwan were to declare formal independence." 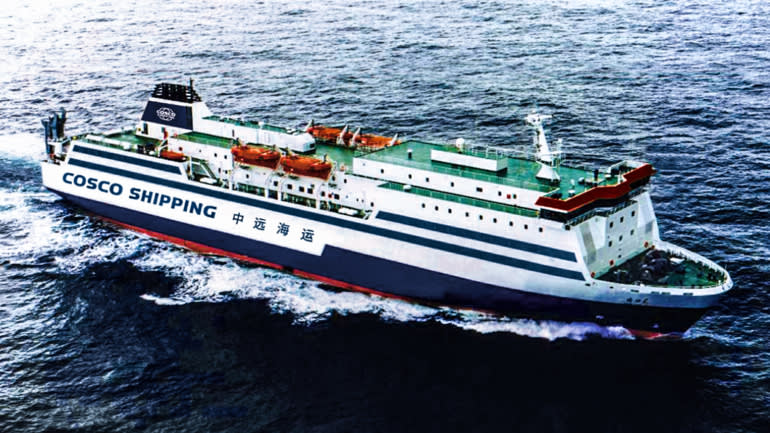 The People's Republic of China has never controlled Taiwan, which was a Japanese colony from 1895 until 1945, when Chiang Kai-shek's China-based Nationalist government took control before fleeing to the island in 1949 to escape Mao Zedong's communist revolution. Since then, the Chinese Communist Party has used "reunifying" Taiwan with China as a rallying point for domestic nationalism.

The U.S. and, more recently, Japan have signaled increased support for Taiwan's continued sovereignty in the face of the growing threat from China under its leader, Xi Jinping. Taiwan President Tsai Ing-wen has made military reform a priority for her second term, which began last year.

The U.S. military has been following developments in Chinese amphibious operations closely and is likely not surprised by recent developments, said Bonnie Glaser, director of the Asia program at the German Marshall Fund in Washington.

"The calculus for military planners has certainly evolved in recent years as China's military capabilities have expanded," Glaser said. "The approval by the Trump administration last fall of the sale of coastal defense cruise missiles to Taiwan is an example of the American and Taiwanese focus on the problem."

The package includes 100 truck-mounted coastal defense launchers and 400 of the U.S. Navy's Harpoon anti-ship missiles. Chinese planners have stated that they have 63 roll on/roll off vessels that could be used for military purposes.

"If they use these types of ferries in the first wave, the risk is very high," said INDSR's Shen. "These kinds of ships would be sitting ducks."

At three to five kilometers from Taiwan's shores, the ferries would be vulnerable to Taiwanese artillery and anti-ship systems. China would likely need to destroy more than half of Taiwan's anti-ship systems before deciding to deploy civilian ferries filled with amphibious tanks, he said.

Nevertheless, even though using large civilian vessels in an invasion attempt would be a gamble, it shouldn't be ruled out, Shen said. "China is willing to take risks."