BEIJING -- "Ladies and gentlemen, friends, the Asia-Pacific is our shared home."

So declared Chinese President Xi Jinping on Thursday to an APEC-related business gathering.

"We welcome cooperation with every other region, country or company that wants to do so," he said, playing the part of global statesman as he famously did at the World Economic Forum in Davos, Switzerland, in January 2017.

In an apparent jab at the U.S., the Chinese leader said that "mounting unilateralism, protectionism and bullying as well as backlash against economic globalization have added to risks and uncertainties in the world economy."

His remarks to the Asia-Pacific Economic Cooperation forum's virtual events last week underscored Beijing's eagerness to fill the growing economic power vacuum left by the U.S. over the decade since the global financial crisis.

Xi said in a Friday speech that China will "favorably consider" joining the Trans-Pacific Partnership regional trade agreement. This announcement came on the heels of the long-awaited conclusion of the Regional Comprehensive Economic Partnership on Nov. 15, portraying Beijing as a promoter of free trade.

There are substantial hurdles to joining the TPP, which was renamed the Comprehensive and Progressive Agreement for Trans-Pacific Partnership after the U.S. withdrew under President Donald Trump.

New York-based consulting firm Eurasia Group called the CPTPP "a far more ambitious agreement than RCEP" and said it is still a "long shot" that China would join anytime soon, in a recent memo.

The CPTPP would require lower barriers in such areas as data flows -- a sensitive topic for the Chinese Communist Party. It would also block preferential treatment of state-owned enterprises, which Xi has put an emphasis on strengthening.

Yet with Sino-American relations expected to remain fraught under Trump's successor, President-elect Joe Biden, Beijing wants to ensure that it, and not Washington, will take the lead in setting rules of the road for Asia-Pacific trade and investment. 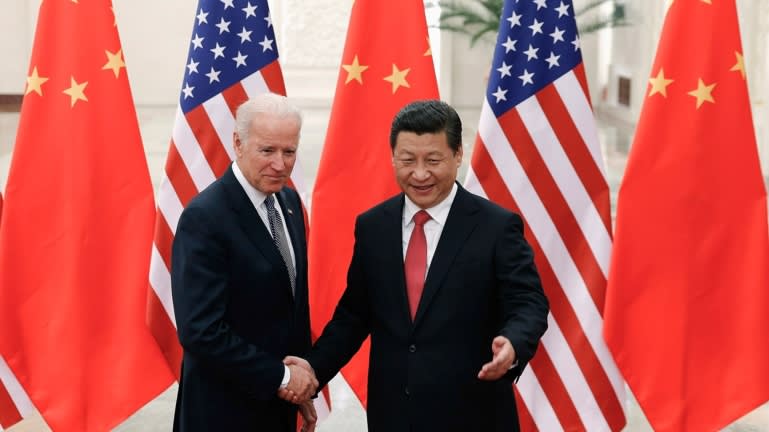 Starting with the Obama administration, the U.S. presence in Asia has declined over the past decade or so.

While calling for a united front against China's activities, the Trump administration left the TPP and has leaned toward protectionist policies.

This stance has not won friends in Asia.

"The attitude of the Trump administration is that this is a win-lose proposition: If I have a surplus, trade surplus, with you, that's good for me. If I have a ... trade deficit with you, that's bad for me," Singaporean Prime Minister Lee Hsien Loong said at an APEC session. "And trade is not like that. Trade is win-win. I may have a surplus with you, I have a deficit with somebody else," but "it doesn't matter as long as overall it balances out," he added.

Japan has high hopes for the U.S. to return to what is now the 11-member CPTPP under a Biden administration. But with Republicans possibly retaining a Senate majority, such a decision will be a tough sell.

Lee said he is not sure whether the U.S. will be more keen on "joining the CPTPP" under Biden "because that depends on domestic politics, too."

The Eurasia Group memo noted: "If China does look serious, such a move may start to shift the conversation in the U.S. about seeking to rejoin the agreement, though this too remains a long shot for now amid populist opposition to multilateral trade agreements."

China now stands on nearly equal footing with the U.S. as an export destination. Goods exports to China from the other 18 APEC members besides the U.S. and Papua New Guinea, which lacks comparable recent data, came to $1.07 trillion in 2019, according to the International Trade Center. This is about 90% of the equivalent figure for the U.S. and represents an 80% increase since the financial crisis.

China's presence grew rapidly in the aftermath of the global financial crisis. The government's 4 trillion yuan ($585 billion) stimulus program at the time stoked domestic demand, leading to a surge in imports.

Meanwhile, China is not shy about using its weight in trade to pressure countries with which it has issues. A decade ago, Beijing halted exports of rare-earth metals to Japan over the Senkaku Islands in the East China Sea. Today, it is punishing Australia through various economic measures to express its unhappiness that Canberra suggested to the international community that the origins of the coronavirus should be investigated.

"The next deal worth watching is long-running negotiations on a trilateral free trade pact among China, Japan, and South Korea," Eurasia Group said. Geopolitical tensions between China and Japan and between Japan and South Korea have stalled progress, it said, but all three countries are in RCEP.

"As with RCEP and the CPTPP, there is a strong defensive motivation for China to strike a deal; the trilateral agreement would further integrate China into regional supply chains and make it harder for the U.S. to press Japan and South Korea to reduce trade with China in sensitive sectors such as semiconductors and chip manufacturing tools," Eurasia Group said.