China allows imports of Japanese rice only from approved mills. There is only one such facility now, but Beijing will add two more to the list, potentially expanding Japan's export market.

TOKYO -- The Japanese ramen noodle chain, Ajisen Ramen, operates around 600 restaurants in China. But if you want Japanese rice with your noodles, you must pay about four times the price of a domestic variety. In China, Japanese rice is only for the deep-pocketed.

One reason Japanese rice is so expensive is that China imposes strict controls on imports of the food staple from Japan. Some of these restrictions were introduced after the Fukushima nuclear disaster of 2011.

But things may soon start to change. On May 9, the two counties struck a deal to increase the Japanese facilities that Beijing approves to process rice bound for its shores. China is a potentially a huge market for Japanese rice, but currently accounts for only 3% of overall exports. Hong Kong and Singapore, the two largest markets, take about 60% of the total.

Japan's agriculture ministry sees China as vital to achieving its target of increasing annual exports of rice and related products to 100,000 tons. In 2017, Japan exported 11,800 tons of rice, of which only 298 tons went to China. According to one estimate, China consumes about 20 times more rice than Japan.

To export white rice to China, brown rice must first be milled and fumigated at facilities that China has approved as safe. The new deal will expand the number of approved mills and fumigation facilities.

There is currently only one rice mill in Japan approved by China, operated by the National Federation of Agricultural Cooperative Associations (Zen-Noh) in Kanagawa Prefecture, south of Tokyo.

The agreement adds two more mills. One is located in Ishikari, on the northern main island of Hokkaido, operated by Hokuren Federation of Agricultural Cooperatives. The other is in Nishinomiya in western Hyogo Prefecture, operated by Shinmei, the nation's largest rice wholesaler.

A Shinmei executive welcomed the agreement, saying it would enable the company to "respond more swiftly to needs in China."

In Beijing, Shinmei sells the popular Koshihikari rice variety, grown in central Toyama Prefecture on the Sea of Japan coast, for about 2,600 yen ($23.70) per 2kg. That is nearly double the retail price in Japan, and 80% higher than the price of Koshihikari produced in northeastern Niigata Prefecture and sold in Hong Kong. 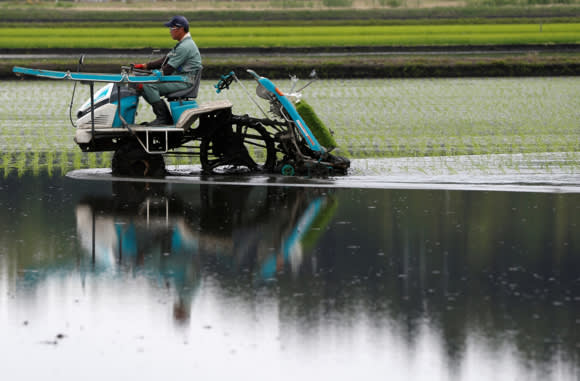 A Japanese farmer in Ibaraki Prefecture tends to his crop using a rice planting machine.   © Reuters

One reason Japanese rice is so expensive in China is because of transport costs and distributor margins. Reducing costs is a principal challenge for Japanese rice exporters.

A Shinmei executive said that in addition to an effective marketing campaign in China, increasing rice exports requires serious cost-cutting in Japan.

For its rice exports to China, Shinmei has had to outsource the milling process to Zen-Noh. That means the rice wholesaler has to send rice harvested all across the country to the Zen-Noh plant in Kanagawa.

Since Zen-Noh's mill and warehouses are not always available, this arrangement requires the time-consuming process of coordinating schedules between the two sides in advance.

As for fumigation to control insects, Beijing has approved only two facilities in Japan, both in Kanagawa. Under the new deal, Japan's agriculture ministry will register five more fumigation warehouses for exports to China, including facilities in Hokkaido and Hyogo.

The new agreement will allow Shinmei to polish rice at its own mills and to fumigate it at a warehouse in Kobe for shipment to China from Kobe's port.

China's restrictions on food imports from Japan following the 2011 Fukushima nuclear disaster are also a barrier to Japanese rice exports. China bans all food from 10 Japanese prefectures, including Fukushima, Miyagi and Niigata.

While Japan and China have set up a task force to discuss steps to ease the restrictions, there is not much reason for optimism about the outcome of the talks, an agriculture ministry official said.

The chairman of the Central Union of Agricultural Co-operatives, Toru Nakaya, is also cautious about the outlook for rice exports to China.

"We do not expect rapid progress, but we welcome the step forward," Nakaya said of the recent agreement.