SEOUL/BEIJING -- Facing a growing backlash from the U.S. and Europe over Hong Kong, China has stepped up a diplomatic offensive to bolster relations with Asian neighbors and avoid international isolation.

Yang, who arrived in Busan on Friday, is China's first senior official to visit South Korea since the start of the coronavirus outbreak. Yang and Suh, a former spy chief who now heads the presidential Blue House's National Security Office, met for about four hours.

As China clashes with the U.S., the U.K. and Australia over its tightening grip on Hong Kong, it is looking to South Korea, Japan and Singapore for diplomatic support. But with some neighbors wary of being dragged into the prolonged Beijing-Washington standoff, whether the Chinese strategy will pay off remains to be seen.

"President Xi will prioritize a visit to South Korea," South Korea's presidential Blue House quoted Yang as saying. Specifics of the timing are to be hashed out in the future. 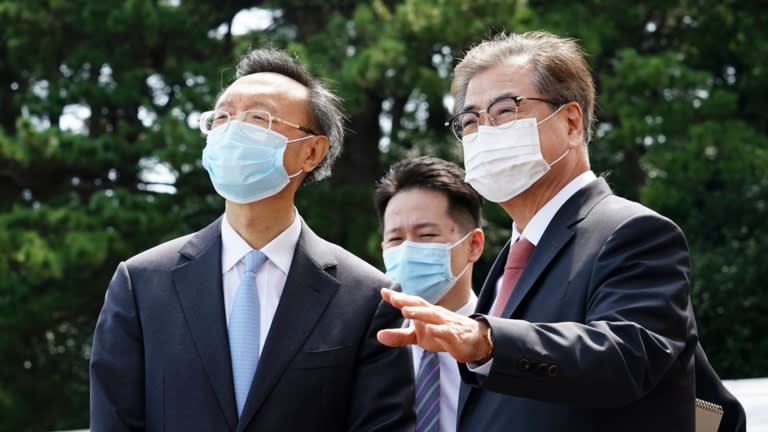 At Saturday's meeting, Yang touched on the current situation with the U.S. and explained Beijing's stance. He also spoke of China's relationship with South Korea. "Bilateral relations are developing at a remarkable speed," Yang said. "As mutually important neighbors and partners, we should continue to cooperate."

Suh, for his part, said that "mutual prosperity and friendly cooperation between the U.S. and China are important for peace and prosperity in Northeast Asia and the world."

South Korea welcomes overtures from China. President Moon Jae-in's push to improve relations with North Korea has stalled. And its ties with the U.S. have grown strained over President Donald Trump's demand that Seoul shoulder more of the costs for keeping American troops deployed in the country.

China is South Korea's top trade partner and is important to its economic recovery from COVID-19. Ties frayed in 2016 after then-South Korean President Park Geun-hye allowed the deployment of the U.S.'s Terminal High Altitude Area Defense, or THAAD, anti-missile system in the country.

The Yang-Suh meeting also included discussions about a possible trilateral summit sometime this year between Japan, China and South Korea, which is next in line as chair of the rotating meeting.

But statements by South Korea after the meeting did not mention a schedule for the summit.

Before going to South Korea, Yang visited Singapore and met with Prime Minister Lee Hsien Loong. Yang promised to deepen cooperation with Singapore and other ASEAN countries, according to the Xinhua News Agency.

Singapore is careful to strike a balance between the U.S. and China. But with those of Chinese descent accounting for 70% of the population, the government wants to remain on good terms with Beijing.

China is also making efforts to improve ties with Japan. Local Chinese authorities along the East China Sea have instructed fishermen not to get close to the Japanese-administered Senkaku Islands, which China claims as the Diaoyu. On Aug. 15, the 75th anniversary of the end of World War II, four Japanese cabinet members visited Tokyo's Yasukuni Shrine, where Japan's war dead are enshrined, but Chinese media refrained from full-throated criticism.

But China could force Asian countries to choose between Beijing and Washington on issues ranging from the national security law for Hong Kong to buying Huawei Technologies products.

If South Korea announces support for China during a visit by Xi, relations with the U.S. would suffer. Seoul has not made its stance clear on Hong Kong, Huawei or the TikTok video-sharing platform that Washington has threatened to ban.