Beijing and Islamabad grow closer with eye on mutual rival

BEIJING/NEW DELHI -- From the sale of stealth fighters to submarines, China is accelerating its defense cooperation with Pakistan in a bid to exert pressure on India, a rival in border disputes with both.

China is believed to want to expand its influence in South Asia while the U.S. and Europe are focused on the war in Ukraine. Beijing "stands ready to provide assistance within its capacity for Pakistan to overcome difficulties and recover its economy," Chinese Foreign Minister Wang Yi told Pakistani Prime Minister Imran Khan in a Tuesday meeting, according to China's Ministry of Foreign Affairs.

Khan expressed hopes for joint achievements and cooperation "in all fields," the ministry said. Ukraine was among the other topics discussed.

China this month delivered six J-10CE fighter jets to Pakistan, the Communist Party-affiliated Global Times has reported. An update to China's homegrown J-10s, they are a key part of the Chinese air force and often fly into Taiwan's air defense identification zone.

The J-10CE is a so-called 4.5-generation fighter, placing it somewhere between the F-15s used widely by Japan and the U.S. and F-35 stealth fighters in terms of capability. The delivered jets later took part in a military parade in Pakistan.

Pakistan this month is also adding 50 new JF-17 fighters, which were developed jointly with China. They do not match the performance of the J-10CE but do come with near-stealth capability.

India recently deployed the Russian S-400 missile defense system with an eye toward Pakistan. China looks to bolster its response to potential Indian air operations through greater cooperation with Pakistan.

China is actively contributing to improvements in Pakistan's navy as well, concerned that the Indian military could wield greater clout in key Indo-Pacific sea lanes. Pakistan in January inducted a Chinese-built Type 054 frigate, which is designed for anti-surface, anti-air and anti-submarine warfare.

"Pakistan is reportedly also planning to purchase from China eight submarines, which Pakistan is positioning as the 'backbone of the Navy,'" Japan's Ministry of Defense said in its 2021 white paper. "Four will be built in China, with the remainder to be built in Pakistan." 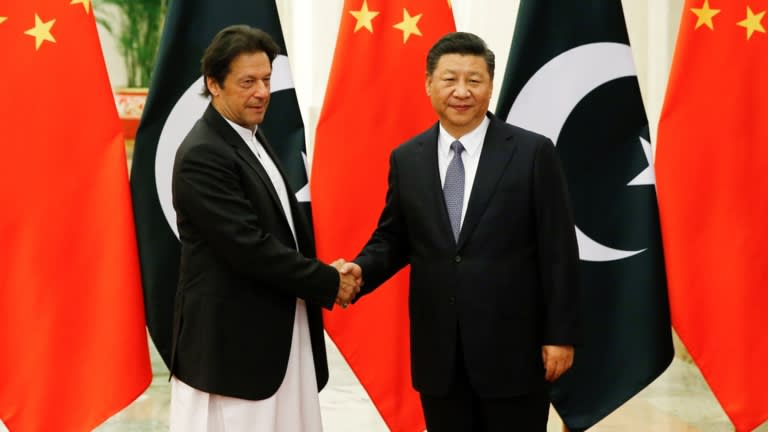 Sino-Indian relations have deteriorated since the deadly 2020 border clash in the Himalayas. India also announced a diplomatic boycott of the Beijing Olympics at the last minute after a Chinese soldier who had been involved in the fighting was chosen as a torchbearer.

Chinese President Xi Jinping invited Khan to the Olympics' opening ceremony. At a Feb. 6 summit, Xi told Khan that bilateral ties had gained greater strategic significance amid global turbulence and transformation. He expressed firm support for Pakistan's sovereignty -- a likely signal that China stands with Pakistan in the latter's own border dispute with India.

Khan expressed hopes for greater cooperation with China. No force can stop China's advance, he said.