China's ASEAN diplomacy pushes back against US 'encirclement'

Beijing backs summit on Myanmar while courting Malaysia and others SHANGHAI -- China is backing the Association of Southeast Asian Nations' efforts to solve the Myanmar crisis and shoring up ties with its neighbors, in a diplomatic blitz framed by state media as "very easy" pushback against U.S. pressure.

Foreign Minister Wang Yi hosted Indonesian counterpart Retno Marsudi on Friday and was due to meet the Philippines' Teodoro Locsin the same day, after successive meetings with Singapore's Vivian Balakrishnan on Wednesday and Malaysia's Hishammuddin Hussein on Thursday.

Wang this week declared Beijing's support for a special ASEAN leaders summit on the bloc's violence-plagued member Myanmar -- an idea pushed by Indonesia, Malaysia and Singapore.

Wang's statement came in conjunction with his meeting with Hishammuddin in Fujian, a southern province. In a news conference, the Malaysian foreign minister said his government believes "China can work together with ASEAN to play a significant and constructive role ... to restore democracy" in Myanmar following the Feb. 1 military coup.

On the eve of his visit, Hishammuddin had spoken on the phone with U.S. Secretary of State Antony Blinken -- a call he described as "great." He appeared just as enthusiastic about Malaysia's relationship with China.

"You will always be my elder brother," he told Wang, who agreed, "We are brothers." 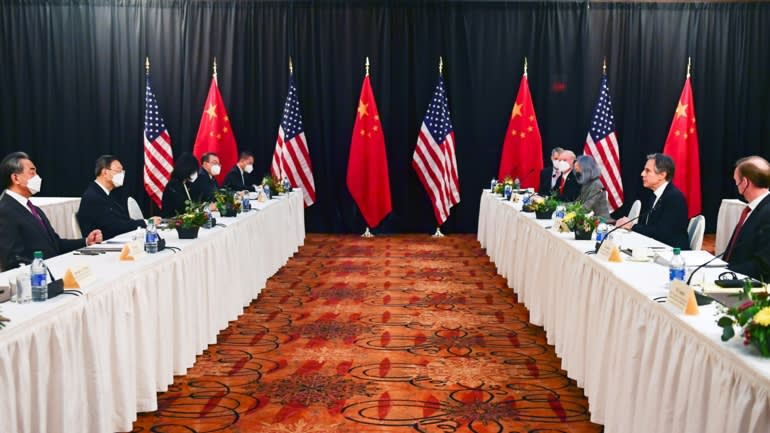 China's diplomacy has kicked into overdrive since the tense meeting with U.S. Secretary of State Antony Blinken and other American officials in Alaska.   © Reuters

Malaysia and China established a High-Level Committee on Post-COVID-19 Cooperation, which Hishammuddin explained would "provide policy guidance for all aspects" of relations. This is to include trade and investment, food security, science and technology, travel arrangements, and projects under the Belt and Road Initiative.

On the trade front, Beijing agreed to allow imports of Malaysian red palm oil, which had failed to meet China's color specification standards. This is seen as a win for Malaysia, whose struggling economy relies heavily on the commodity.

China, meanwhile, gains a firmer foothold in Malaysia's pharmaceutical market, with a plan to bottle COVID-19 vaccines in the Southeast Asian country, according to a statement on the meeting by the Chinese Embassy in Malaysia. This will make Malaysia the second Chinese vaccine production base in the region, after Indonesia, and follows a deal China sealed last week to make millions of Sinopharm vaccine doses in the United Arab Emirates.

The deals suggest growing acceptance of Chinese vaccines, which have yet to penetrate developed countries like the U.S. and Australia. China and Malaysia also agreed in principle on mutual recognition of "vaccine passports" -- envisioned digital health certificates that would facilitate travel.

Wang's meeting with Hishammuddin is part of a Chinese diplomatic offensive since the tense encounter with Blinken in Alaska last month.

In an editorial on Thursday, the Chinese Communist Party-affiliated tabloid Global Times said China was overcoming U.S. attempts at "encirclement."

"The only thing that we can probably say is that it is actually very easy to break the so-called U.S. encirclement, or in other words, building circles around China is a false proposition put forward by those who think too highly about themselves," the Global Times wrote.

And the U.S., Japan, India and Australia have made their Quadrilateral Security Dialogue, or Quad, a centerpiece of cooperation to counter China's maritime ambitions.

But Chinese President Xi Jinping's government appears eager to show it is far from isolated.

In a virtual news conference, Marsudi said the discussions positioned Indonesia a "vaccine hub" in Southeast Asia. "This idea is still in its early stages, but what we are proposing includes cooperation to strengthen vaccine development research, develop the raw material industry and increase the national vaccine production capacity," she said.

For his part, Lutfi revealed that the two countries had set a new target of tripling bilateral trade to $100 billion in the next three years. The archipelago's minister of SOE Thohir also confirmed that a Chinese consortium including Contemporary Amperex Technology, or CATL, will invest $5 billion in an Indonesian batteries venture aiming to power electric vehicles.

Philippine Foreign Secretary Locsin's meeting with Wang will be overshadowed by the recent intrusion of Chinese maritime "militia" vessels in disputed South China Sea waters. But China's foreign ministry spokeswoman downplayed the dispute on Thursday, saying it was "completely normal for Chinese fishing ships to take shelter" at a reef in the area.

The spokeswoman also put the diplomatic outreach to Manila in the context of tense relations with unnamed powers. "Some forces never miss any chance in their attempt to drive a wedge between China and the Philippines," she said. "We are sure the Philippines can tell facts from fallacy and won't fall for their tricks."

Like the meeting with Russia's Lavrov in Guizhou in southern China, Wang's talks with ASEAN ministers in Fujian are all being conducted away from the capital, as the government seeks to showcase the economic development of rural provinces.

The same will be true of yet another meeting on Saturday, when the foreign minister hosts South Korean counterpart Chung Eui-yong in the Fujian city of Xiamen.