A 50-page study published last week by the German Marshall Fund of the U.S. warned that Beijing is using its influence at the U.N. to compel NGOs to rewrite references to Taiwan and revise historical documents. (Nikkei montage/Reuters/AP)
THOMPSON CHAU, Contributing writerMarch 30, 2022 14:43 JST | Taiwan
CopyCopied

TAIPEI -- Beijing is seeking to impose its narrative on United Nations bodies and nongovernmental organizations that democratic Taiwan is part of Communist-ruled China, a U.S. think tank wrote in a new report.

A 50-page study published last week by the German Marshall Fund of the U.S. warned that Beijing is using its influence at the U.N. to compel NGOs to rewrite references to Taiwan and revise historical documents, or risk losing access.

The resolution, the report pointed out, does not include the words "Republic of China" or "Taiwan." Nor does it present an institutional position on the status of Taiwan, even though the PRC claims it does, and it just states that the PRC will represent "China" at the U.N.

The report said that Beijing has moved to twist the original text of Resolution 2758 in ways that construe it as equivalent to its "One China" principle. That position states that "there is only one China in the world, Taiwan is a part of China and the government of the PRC is the sole legal government representing the whole of China."

"China's distortion of Resolution 2758 has made it exceedingly difficult for Taiwan to participate in U.N.-affiliated agencies in any way," commented Bonnie Glaser, director of the Asia Program at the Marshall Fund and the report's co-author.

"Many countries around the world don't want to pick a fight with China, so even if they don't accept Beijing's 'One China' principle, they avoid challenging it. Citizens from Taiwan cannot even visit U.N. buildings unless they have a travel permit issued by China," said Glaser, a renowned Taiwan expert. "If democracies stood firmly against these PRC efforts, they would have a great deal of leverage."

Commemorating the 50th anniversary of the vote, Chinese President Xi Jinping last October hailed the resolution as a "victory of the Chinese people." In the same month, the Global Times, a party mouthpiece, hit back at criticism by the U.S. and Taiwan and insisted that the resolution means that China's U.N. representation includes Taiwan.

"The fact the resolution does not mention the island of Taiwan explicitly indicates that it is part of China," it argued, quoting a Chinese academic. 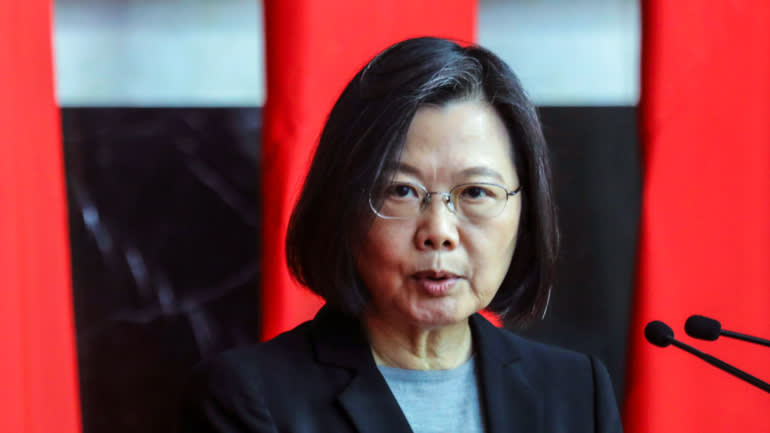 China tolerated the inclusion of Taiwan in international bodies when it was governed by the now opposition Kuomintang, but access was cut off when President Tsai Ing-wen of the Beijing-skeptic Democratic Progressive Party was elected in 2016.   © Reuters

The study pointed out that Chinese officials pushed authorities to suspend Wikimedia Foundation's application for observership to the World Intellectual Property Organization because content on Wikipedia, which was hosted by the foundation, was at odds with Beijing's Taiwan position.

Last December, China objected to the participation in the Convention on the Physical Protection of Nuclear Material of five NGOs, including U.S. think tank, the Stimson Center, which was asked to change references to Taiwan or risk having their attendance blocked.

Such moves hamper coordination on transnational issues that pose threats to the safety and well-being of the global community, according to the study. Exclusion of Taiwan and its national aviation authority, which manages one of the busiest transit hubs in the region, from the International Civil Aviation Organization and information-sharing mechanisms carries such risks.

Similarly, it cited how the World Health Organization failed to respond to Taiwan's Center for Disease Control's question of whether the outbreak of a virus in Wuhan had the potential for human-to-human transmission in December 2019. The question went unanswered even though it "was relayed to the WHO through the appropriate International Health Regulations channels -- in accordance with the MOU between the PRC and the WHO."

In response to the findings, Taiwanese Foreign Ministry spokesperson Joanne Ou said taking part in the U.N. system is a long-term policy objective of the Taiwanese government. "Taiwan has always promoted meaningful participation in the United Nations system by adhering to the principles of 'professionalism, pragmatism, and contribution.'"

The official added that Beijing has long pressured the U.N. and its agencies to erroneously invoke and inappropriately expand and interpret Resolution 2758, preventing Taiwanese citizens from taking part in meetings and activities and denying entry of Taiwanese media.

China tolerated the inclusion of Taiwan when it was governed by the now opposition Kuomintang, under a vague understanding between the party and the CCP that both sides of the Taiwan Strait belong to "One China." But access was cut off when President Tsai Ing-wen of the Beijing-skeptic Democratic Progressive Party was elected in 2016.

Pan Chao-min, a professor in the Department of Political Science at Tunghai University in Taichung, urged Taiwan to work on cross-strait relations, citing China's role driving the efforts to sideline Tsai's government on the international stage. Under Tsai, Taiwan's response to Beijing's pressure so far is to rely on U.S. support, he added.

"If America genuinely wants to support Taiwan, they should make some concrete moves, such as signing a U.S.-Taiwan trade deal and actively helping Taiwan get admitted into CPTPP," said Pan, referring to a massive multilateral regional trade deal called the Comprehensive and Progressive Agreement for Trans-Pacific Partnership. Both Taipei and Beijing have applied to join the pact.

The Marshall Fund report called on Washington to launch an initiative to forge a group of like-minded countries willing to challenge China's interpretation of U.N. Resolution 2758, and take steps to curb Beijing's "growing coercive and corrupting influence as well as its efforts to promote and legitimize its agenda across the U.N. system."