China's power closing in on US, warns think tank TOKYO -- The geopolitical power balance in Asia is likely to undergo a rapid shift in the coming decades, potentially creating tensions between countries and increasing the risk of war, said the Sydney-based Lowy Institute as it released a new ranking of regional political power on Tuesday.

The league table -- Asia Power Index 2018 -- shows that the U.S. is still the pre-eminent power in the Asian region, but adds that China, the emerging superpower, is rapidly closing in.

In the inaugural list, the U.S. was ranked No. 1 with a score of 85, enjoying a nearly 10-point lead over China in second place with 75.5. They dwarfed Japan, which took third place with 42.1 points, and fourth place India, with 41.5 -- two countries occupying the category of "major powers." They were followed by "middle powers" including Russia, Australia, South Korea and Singapore.

The strength of the U.S. rests in its ability to forge alliances across Asia, said Herve Lemahieu, Asia Power Index project director. "To the contrary, China has border and territorial disputes with many of its neighbors, who view its intentions with a lot of skepticism," he said.

But the U.S. may be foregoing its advantage, as U.S. President Donald Trump pursues a policy of putting American interests ahead of those of its allies. Lemahieu thinks it is possible that Trump could agree to withdraw troops from South Korea, for instance, if North Korea follows through with abandoning the development of intercontinental ballistic missiles targeted at the U.S.

"If that's the case, we are starting to see an unraveling of the U.S. alliance network in Asia, which would be detrimental not only to U.S. power but also to the allies that are very dependent on the U.S.," such as Japan, Australia, South Korea and Taiwan, he said. 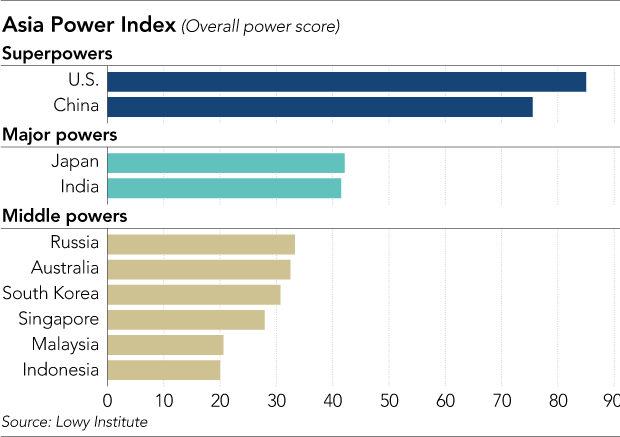 The index, the first edition of which was released on Tuesday, calculates the "state power" of 25 countries and territories based on their scores in 114 mostly quantifiable indicators. These are as diverse as gross domestic product, the value of foreign direct investment, and the numbers of weapons, joint military exercises, free trade agreements and foreign students. The scores will be updated annually.

The index has an interactive feature, allowing users to introduce their own assumptions and weightings to produce tailored versions of the rankings.

The launch of the index reflects the Sydney-based research group's view that the power balance in the region requires careful scrutiny, as it is likely to change very quickly.

"The competition between the U.S. and China will be one of the most closely watched elements of the index in the coming years," the Lowy Institute's executive director Michael Fullilove said at a news conference in New York on Monday. "Many of the strengths of the United States in Asia are in some ways being undermined by President Trump's actions," he said.

In calculating the ranking, the institute gave economic resources and military capability the largest weighting, at 20% each.

Another important component in the index is future trends -- GDP, working-age population and military expenditure by 2030. In the former two categories, China scores particularly highly against its rivals such as the U.S. and Japan. 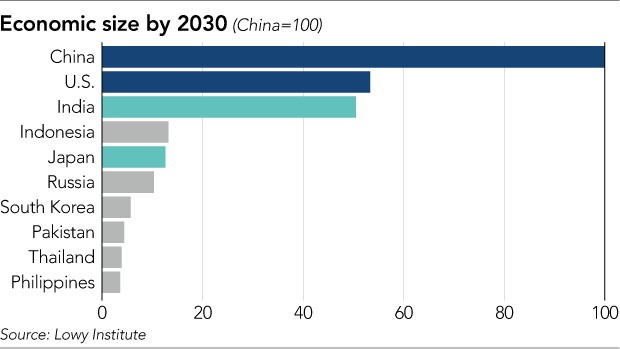 How a country's outlook is perceived has important implications for its power today.

"If people perceive the U.S. as a declining power, or Japan as being a declining power, you are more likely to see China as more powerful, even more powerful than is justified on the basis of what it currently has," Lemahieu said. But he noted that future trends were purely hypothetical and subject to change, therefore did not carry a high weighting in the index.

Asia is expected to account for two-thirds of the world's population by 2025, compared with just over a tenth for the West, and to become the dominant force in the global economy. China is at the center of the rise of Asia.

But a more assertive China could give rise to more tensions in a region that still has many unresolved historical issues and territorial disputes, as well as open geopolitical rivalry.

The lack of common worldviews and interests could present a challenge when disputes flare up between old enemies, such as China and Japan, China and Vietnam or China and India, Lemahieu said.

"What we really need to pay attention to is the fact that Asia doesn't speak in one voice, that it's not one bloc, and that there is no central organizing principle" or architecture such as the European Union or the North Atlantic Treaty Organization, he said.

When a war broke out between China and Vietnam almost 40 years ago, it was less important to the rest of the world. "But if a war were to break out today, that would affect trade routes in the South China Sea," which carries an estimated third of global shipping, he said.

If Asia's geopolitical competition turns into war, "it would matter more than it did in the past because of the region's importance."

Ariana King in New York contributed to this story.