NEW YORK/TOKYO -- Just five years ago, Chinese President Xi Jinping was digging into a basket of fish and chips and enjoying a pint of beer with then-U.K. Prime Minister David Cameron at the latter's "local" near his countryside residence of Chequers. Along with the iconic images from England came the announcement of a new "golden era" of Sino-British ties.

Xi was also expected to make his first visit to Japan as a state guest this April, while the famed cherry blossoms were in full bloom, before COVID-19 disrupted plans.

But this week, meetings in London between Japanese Foreign Minister Toshimitsu Motegi and British Foreign Secretary Dominic Raab signaled the different direction that the two countries are taking in securing the Indo-Pacific region, and in dealing with China in particular.

"Japan is a close friend of the U.K. and our key security partner in Asia," Raab said in a statement issued Wednesday after he spoke with Motegi.

Both men shared "grave concerns" over the recent situation concerning the Hong Kong legislative elections, according to Japan's Ministry of Foreign Affairs. They affirmed that they will continue to closely coordinate against Chinese expansionism in the East China Sea and the South China Sea.

Although a bilateral trade deal was the purpose of Motegi's visit, there is more to why Japanese Prime Minister Shinzo Abe's right-hand man chose the U.K. as the first foreign country for him to set foot in after the coronavirus outbreak. 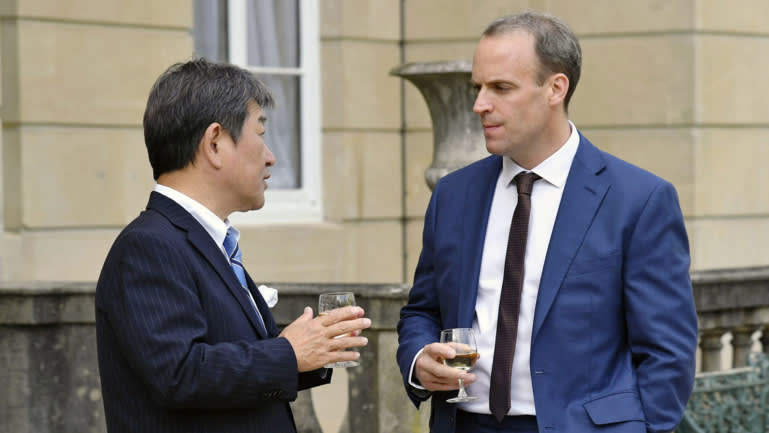 As Sino-American tensions escalate, the two U.S. allies are clearly positioning themselves in Washington's camp and discussing ways to check China's plans. Topics of discussion have included the British role in Asia's regional security and, possibly, Japan sharing information with the Five Eyes alliance.

"Who are the Five Eyes? They are the members of the oldest and most successful intelligence-gathering and intelligence-sharing alliance in the world," explained Arthur Herman, a senior fellow at the Washington-based Hudson Institute think tank, in a Nikkei Asian Review opinion piece arguing that Japan is already regarded as an informal sixth member and should officially join.

"Formed after World War II, the alliance consists of the U.S., U.K., Australia, Canada and New Zealand (the term Five Eyes derives from the phrase 'AUS/CAN/NZ/UK/US EYES ONLY,' meaning information to be shared among the other members only)," he wrote in the 2018 piece. "The alliance operated very successfully during the Cold War in gathering and sharing data regarding the Soviet Union, and it had a strong revival after 9/11 during the war on terror."

But now, a rising China is the center of attention for the alliance -- and its friends in Tokyo.

"The mood in London has shifted quite dramatically against China," said Raffaello Pantucci, a senior associate fellow at the London-based Royal United Services Institute think tank, or RUSI.

"First, China under Xi has definitely gone in a more aggressive direction and this has worried everyone. ... For the U.K. in particular, what has happened with Hong Kong has really pushed things over the edge," he said.

Second, Pantucci said, is that the U.K. is "dragged along a bit" by the increasingly anti-China stance of the U.S., its biggest strategic ally.

"Third, the Tory Party appears to have discovered China as a cause celebre -- in part a product of U.S. pressure and also as a new target for their rage to distract from all the other chaos that is going on," such as Brexit and COVID-19. Prime Minister Boris Johnson "is facing all sorts of party pressure to do something more robust and aggressive against China to assuage his base," Pantucci said.

Britain's issues with China are not limited to Hong Kong. In July, the government decided to ban Huawei Technologies from its 5G infrastructure.

Meanwhile, fellow Commonwealth nations are also taking a harder line against Beijing. Canada's relationship with China has soured over Meng Wanzhou, Huawei's chief financial officer, who is under house arrest in Vancouver.

These developments are favorable to a Japan alarmed over Chinese moves in the Indo-Pacific region. The area is home to many Commonwealth members, including India, Australia, and a number of Pacific island nations.

As the U.K. seeks to strengthen its ties with the Commonwealth in a post-Brexit world, it presents a natural partner for the U.S.-Japan alliance in encircling China. 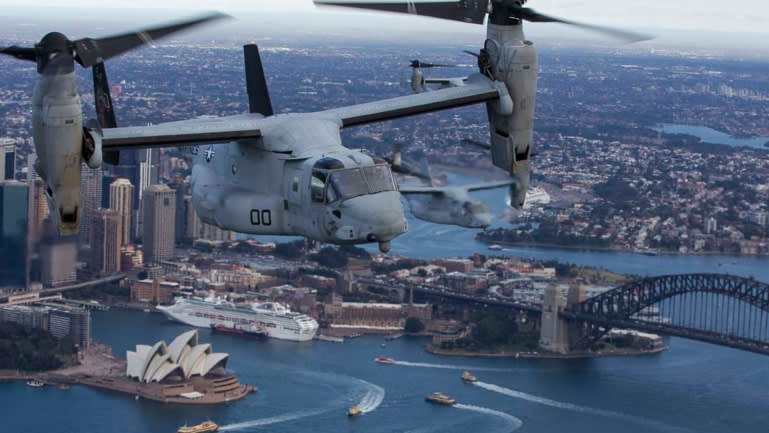 While China has historically tended to look inward, Japanese Defense Minister Taro Kono said in July that it now "has to be seen as an expansionary power" in a video call with legislators from the U.K.'s Conservative Party, according to a summary posted on Facebook by Anthony Browne, a member of Parliament from South Cambridgeshire.

"He repeatedly invited the UK to join the TPP (Transpacific Partnership) talks, saying that we were a Pacific nation because of Pitcairn Island (!)" Browne wrote.

Fellow participant Tom Tugendhat, a member of Parliament from Kent, tweeted that Kono had welcomed a proposal for Japan to join the Five Eyes alliance, turning it into "Six Eyes."

Asked at a news conference Tuesday about Japan joining the intelligence-sharing alliance, Kono said: "The five countries share basic values with Japan, and we already exchange views and information on diplomatic and security issues. There is no international organization called the Five Eyes, but we do want to continue to cooperate closely with the five countries."

Japan is already gearing up legally to forge stronger intelligence and security ties with new partners. In June, it broadened the scope of its state secrets law to include exchanges with countries beyond the U.S. The law -- initially enacted in 2014 amid controversy, already covered Washington, Tokyo's closest ally, and now adds the U.K., Australia and India -- will facilitate classifying information from foreign militaries as state secrets.

It is also aims to underwrite joint exercises and tie-ups for developing military equipment. The law also eases sharing data on Chinese troop movements, an increasingly crucial issue as it has grown harder for Japan to track China's activities in the region on its own.

The comprehensive free trade deal that Japan and the U.K. are trying to ink is seen as a steppingstone to further cooperation between the two countries in a new post-Brexit order, and perhaps an alternative path as London looks to rebalance its relationship with Beijing.

"In the U.K, the relationship [with China] has evolved from the golden era of economic engagement to a more cleareyed approach," said Veerle Nouwens, a research fellow at RUSI.

"Issues pertaining to Hong Kong, international law, the Sino-British treaty, are important for the U.K., and China's seen as challenging the principles that the U.K. and other like-minded states view as critical to global peace," she said.

"Also, the U.K. seeks a new foreign policy rule, and a more prominent role in the Indo-Pacific," Nouwens said. "In defense and security terms, protecting a rules-based international order is now a part of Global Britain, which is no longer a European Britain."

London's new foreign policy may have a more muscular approach to the Indo-Pacific.

Britain is due to dispatch an aircraft carrier to Asia next year. The Times of London reported in July that the U.K. has drawn up plans to permanently base a carrier strike group in the Indo-Pacific region to counter the threat from China.