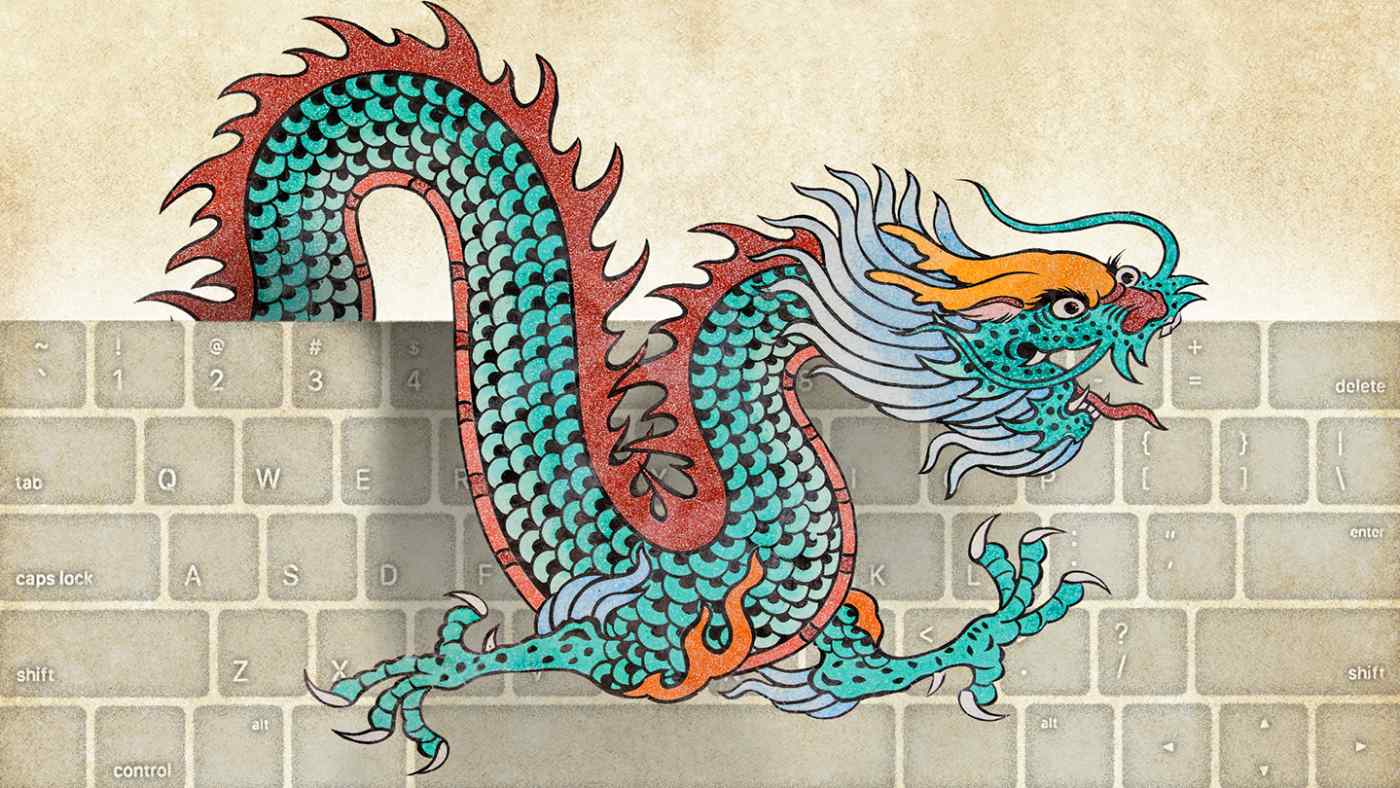 KUALA LUMPUR -- Anyone who has spent time in China will have had to grapple with the "Great Firewall" that bars the use of many overseas websites and applications.

But turn things around, and it is clear that Chinese companies, including the embattled tech giant Huawei Technologies, are using platforms banned by Beijing to get their message out to the world. Huawei uses Western social media to counter the Trump administration's narrative that it is a security risk, and should be banned from Western markets -- particularly superfast 5G networks.

U.S. President Donald Trump is seeking to rein in China's technological ambitions. Last week Washington took the unprecedented step of threatening to suspend intelligence-sharing with an ally -- in this case Germany -- should Berlin allow Huawei to supply equipment for 5G networks.

But despite the hostility from Washington, Huawei has over half a million followers on Twitter and 1.3 million on Facebook.

"5G gaming beats the 4G experience every time with even lower latency and ultrahigh bandwidth," Huawei wrote on its Facebook page during the Mobile World Congress in Spain in late February. A tweet posted a day earlier said: "Huawei's playing its part too to bringing [sic] safer, faster and smarter 5G experiences."

China's state media in turn has many more followers on Western social platforms than even Huawei -- in some cases running into the tens of millions. Again this is despite many foreign media sites being blocked by China.

China Global Television Network has 12 million Twitter followers and 75 million on Facebook -- more than Mark Zuckerberg's company itself. China Daily, a state mouthpiece, has 68 million and China Central Television has in the region of 50 million.

"As Chinese internet companies go global, it's not at all surprising that they would use a variety of global platforms, such as Twitter and Facebook, to communicate with their potential customers," said Mark Wu, a China and trade law expert at Harvard University.

"As long as Chinese companies comply with the terms of the user agreements put forward by Twitter, Facebook, and other Western companies, I would expect that the growing trade tensions won't affect their ability to operate accounts on these Western platforms," he said. 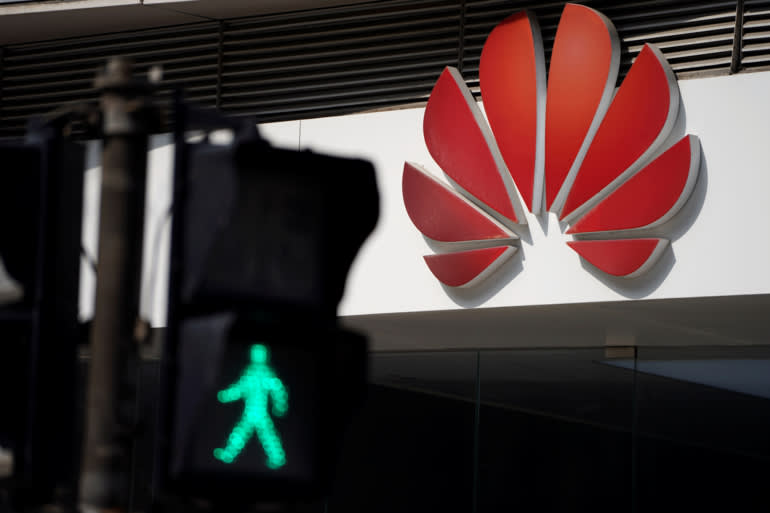 A Huawei company logo is seen outside a shopping mall in Shanghai. Last week the U.S. threatened to suspend intelligence-sharing with Germany should Berlin allow the Chinese tech giant to supply equipment for 5G networks.   © Reuters

Given the domestic firewall, most page follows are from outside the country. The People's Daily following on Facebook in China is only 104,000, according to data from Socialbakers, a social media data analysis company.

But overall, Chinese media follower numbers stack up well against big Western publications on Facebook. For example, the BBC has 48 million followers, CNN 35 million, The New York Times 16.7 million and The Guardian 8.1 million.

China's Internet giants such as Baidu, WeChat and Weibo also have large followings on Western social media, though numbers are small compared with their user bases in China.

Weibo, China's answer to Twitter, has around 500 million users, overtaking Twitter's global total in 2017. WeChat, a messaging application owned by Tencent Holdings, had 1.08 billion users by September 2018, according to a Jan. 9 media release, putting it behind only Facebook's Messenger and WhatsApp in global terms -- though most of its users are in China.

Shutting Western competitors out of China has allowed domestic social media and e-commerce companies to flourish in the world's second-biggest economy, helping them build up the war chests they need to take on Western companies overseas.

"As U.S. tech companies advance their efforts to gain market share in the developing world, they face growing competition from Chinese tech companies Alibaba Group Holding, Baidu, and Tencent, which have grown to massive scale under the protection of China's Great Firewall and in a home market with more internet users than any other country," said the Center for Global Development in a February report.

And as concerns grow over the security of user data -- particularly on Facebook, which has been accused of giving third parties access to such data -- Chinese apps are starting to gain a foothold in Western markets.

"A growing number of internet users resent Facebook's poor privacy record," said Claudia Biancotti of the Peterson Institute of International Economics, a U.S. think tank. "There's also resentment about Amazon's treatment of workers, and in some circles Google is seen as politically biased. 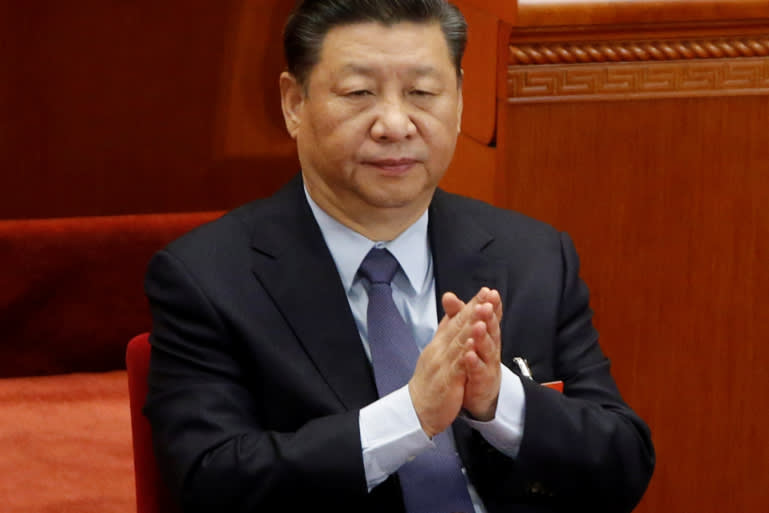 Chinese President Xi Jinping claps at the closing session of the National People's Congress in Beijing on Friday.   © Reuters

Despite operating in two seemingly separate worlds, U.S. and Chinese social media feed off each other. Facebook last week said it wants to steer its platforms toward private messaging, seemingly emulating the all-purpose format of China's WeChat.

But Yan Wu, senior lecturer in media and communications at Swansea University, said despite WeChat's huge domestic user base, it has not made inroads internationally, partly because it is "very much geared toward the digital market, user behaviors and cultural protocols in mainland China."

That is in contrast to video-sharing platform TikTok, which not only is China's first social media success story in Western countries but already shares with Western competitors the ignominy of being hit with privacy breach complaints and regulatory action.

But privacy concerns about social media's household names could be an opportunity for more Chinese apps to make inroads.

"There is a backlash against big tech, and this may indeed create an opening for Chinese players, especially as users may not realize they're Chinese," Biancotti said.

She warned, however, in a January report that if data gathered by social media apps is sent to China, it can be easily accessed by the government in Beijing.

WeChat's privacy policy states: "We share your information with selected recipients who have a legal basis and valid jurisdiction to request such data. These categories of recipients include: government, public, regulatory, judicial and law enforcement bodies or authorities where we are required to comply with applicable laws or regulation."