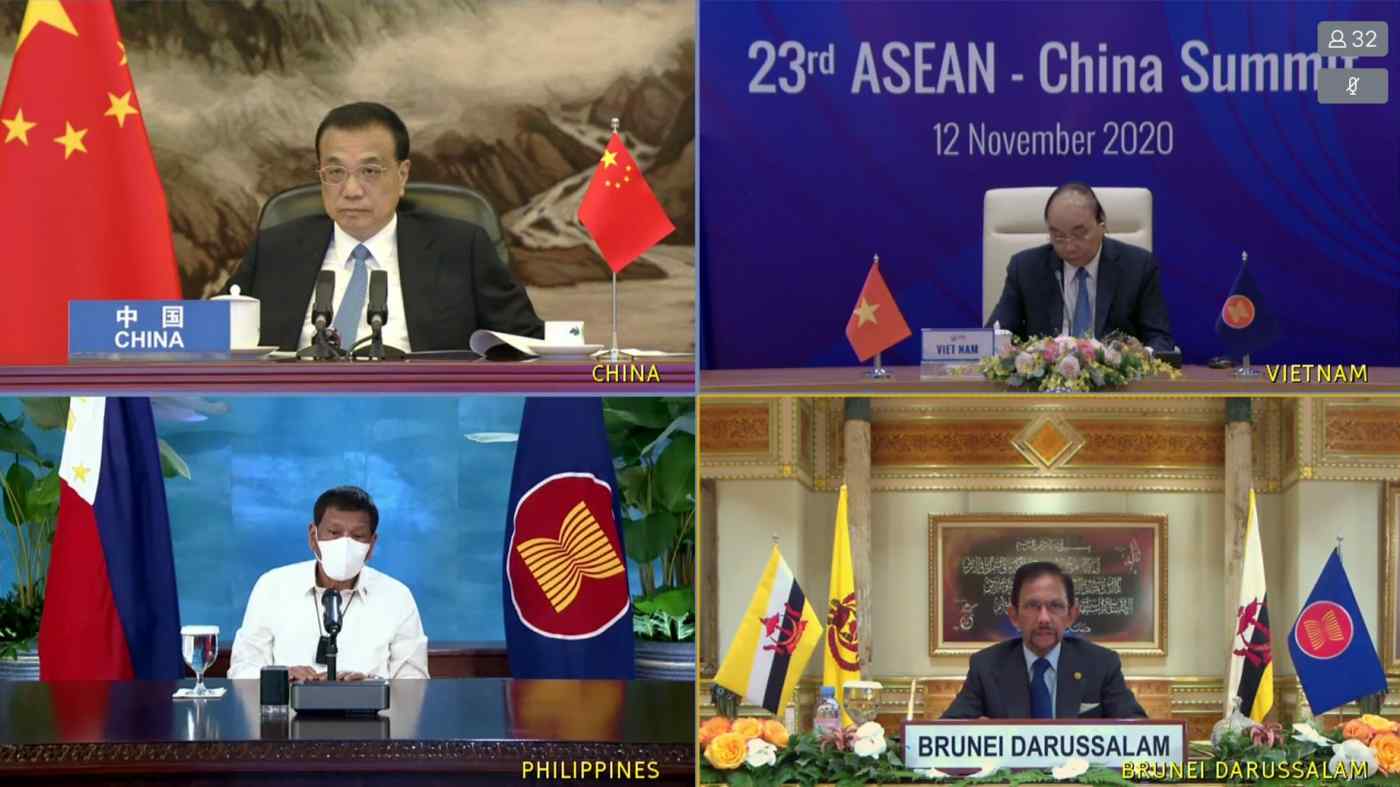 HANOI/BEIJING -- China has moved to expand its influence in Southeast Asia as the U.S. remains absent from the diplomatic stage, touting the birth of a major economic bloc and promising priority access to coronavirus vaccines in the ASEAN summit.

Chinese Premier Li Keqiang on Thursday addressed the leaders of the Association of Southeast Asian Nations via monitors at the summit, calling the region China's largest trading partner.

China "will actively consider ASEAN countries' needs when our COVID vaccines are developed and deployed," the premier said. Li reiterated Beijing's offer of economic support for coronavirus-hit nations as well.

Vietnam, this year's chair of the meeting, and Japan have expressed concerns about China's rise. But the absence of the U.S., which has been consumed with the aftermath of the presidential election, has shifted the diplomatic landscape to Beijing's advantage.

A day before the ASEAN opened its summit, 15 nations participating in the Regional Comprehensive Economic Partnership reached an agreement Wednesday to sign the long-awaited trade deal.

An RCEP without rival India marks a major win for China, which has been pushing for a quick launch of the pact to take the lead in trade in the region. The free trade bloc, which also includes Japan, South Korea, Australia, New Zealand and the 10 ASEAN members, accounts for 30% of global GDP.

Japan was reluctant to sign on to the RCEP deal amid China-U.S. trade tensions under President Donald Trump, but the loss of Trump in the election nudged Japan forward.

"That Trump's loss in the presidential race has become decisive has also pushed [the RCEP] toward a signing," said a source close to the Japanese government.

Meanwhile, the U.S. will likely be a no-show at Saturday's ASEAN leaders' summit. As of Friday, there had been no announcement of which U.S. official will attend.

China is expected to press for concessions from multiple Southeast Asian nations engulfed in territorial disputes with China in the South China Sea.

Li on Thursday called on ASEAN leaders to accelerate discussions on the Code of Conduct that would govern the South China Sea.

"By so doing, we will demonstrate to the international community that we have the wisdom and capability to properly manage the situation in the South China Sea and safeguard its peace and stability," Li told the ASEAN leaders.

This followed China releasing draft legislation on Nov. 4 that would authorize the Chinese coast guard to fire on foreign vessels as a means of protecting artificial islands in the South China Sea.

Differences concerning the South China Sea "are settled through peaceful means, where the law is fully respected and observed, and common values are upheld," Phuc said at the summit.

India had initially been receptive to opening up the market for investments through RCEP, but balked over cutting or eliminating tariffs, concluding its domestic products would be threatened under the pact.

India's exit was a major blow to Japan. With the U.S. not being party to the bloc, China could wield its 2nd largest economy to take the leading role.

India would have served as a counterweight to China in light of the territorial tensions between the two countries. But Japan's attempt to bring back India ultimately failed.

The RCEP, which does not require the high level of tariff cuts demanded under other trade agreements, is a good stage for China to expand its commercial reach.

Trump has been less than enthusiastic about Asian diplomacy. Biden, on the other hand, expressed agreement with a free and open Indo-Pacific during a Thursday telephone conversation with Japanese Prime Minister Yoshihide Suga.

Given this, China is likely to step up its engagement efforts in the region before the next U.S. president returns.