China tops world in diplomatic posts as US retreats TOKYO -- Fifty years ago, China only had one overseas embassy -- in Cairo. Now, it has overtaken the U.S. in having the most diplomatic posts in the world.

While China is adding diplomatic muscle to its rising economic and military clout, the U.S. is cutting back. President Donald Trump's first secretary of state, Rex Tillerson, instituted a freeze and a reorganization of the State Department, during which the U.S. lost 60% of its top foreign service officers. Trump also prefers one-on-one diplomacy to going through the usual channels.

The U.S. lost one post last year, when Russian President Vladimir Putin ordered the closure of its consulate in St. Petersburg after Trump expelled 60 Russian diplomats from the U.S. over the poisoning of a former Moscow agent.

Beijing, meanwhile, has been adding or strengthening its diplomatic presence in countries it has succeeded in flipping from Taiwan. Embassies have opened in Burkina Faso, El Salvador and Sao Tome and Príncipe, for instance. In the Dominican Republic, which also switched its diplomatic relations from Taipei to Beijing last year, China's commercial development office was upgraded to an embassy.

Countries that China has a diplomatic mission, but the U.S. does not, include Antigua and Barbuda, Guinea-Bissau, Seychelles, Vanuatu, as well as Syria and North Korea. The nearly 14,000-strong U.S. foreign service is still larger than the 10,000 from China. But the departure of several senior State Department officials -- and the loss of their institutional knowledge -- over the past three years has raised concerns in Washington.

Under the current secretary, Mike Pompeo, over 50 embassies lack ambassadors, according to the American Foreign Service Association. The Washington Post's nominations tracker finds that 27% of key State Department positions are unfilled.

"I wouldn't hide under the pillow just yet or pronounce that the U.S. is 'losing,'" said Martin S. Edwards, director of the Center for UN and Global Governance Studies at Seton Hall University. "But it is a very concerning indicator, especially given the low morale at State right now."

The U.S.'s diplomatic retreat is allowing China to strengthen its presence abroad and build stronger networks in many countries, Edwards said.

China's growing reach risks normalizing Beijing's policies in the eyes of the world, according to Edwards, who pointed out the lukewarm international response to the persecution of Uighur Muslims in Xinjiang and the police crackdown on pro-democracy protesters in Hong Kong.

China, however, still trails the U.S. in terms of the number of foreign posts in their capital cities. Beijing has 59 embassies and the Spanish consulate-general, while Washington has 61 embassies, consulate-generals for most countries, eight permanent missions for members of the Organization of American States, as well as Taiwan's economic and cultural office. 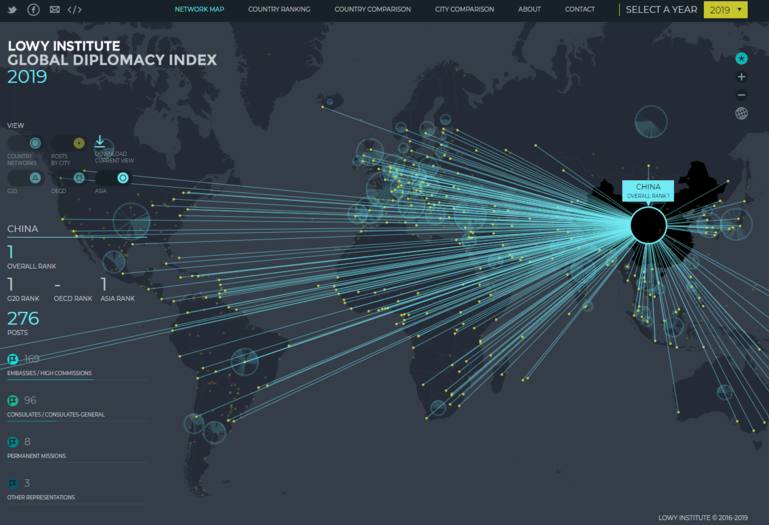 In addition, most countries have a consulate and a permanent mission to the United Nations in New York, totaling 109 posts. Shanghai, China's largest city, hosts only 47 consulates.

The report found that, overall, countries had an average of 120 posts. France came in third place with 267, followed by 247 for Japan and Russia's 242.

After China and Japan, the highest ranking Asian countries are India (186), South Korea (183), and Indonesia (132). Bhutan, historically a hermit country, came in last overall with only 9 posts.

The report confirmed that diplomatic reach tracks closely with a country's ability to fund foreign posts. Of the Top 10, only Spain, which came in ninth, is not in the Group of 20 leading rich and developing nations.