China unsettles EU with Belt and Road moves in the Balkans

Germany, the economic and political leader of the European Union, has common interests with China in fending the protective trade measures of U.S. President Donald Trump. But there are important differences underlying such friendly meetings as well, including concerns about China's human rights record. And a new concern has emerged for the EU in recent years -- China's growing influence in the Western Balkans, the area comprising primarily the countries of the former Yugoslavia, including Serbia, Bosnia and Herzegovina, Montenegro, Kosovo, Macedonia and Albania.

China is investing heavily in the region as part of its Belt and Road Initiative to recreate old Silk Road trading routes, while pushing the EU to embrace its eastern neighbors to keep outside players from destabilizing the historically volatile region.

In the 1990s, the Western Balkans were mired in bitter ethnic conflict in the lead-up to and aftermath of the collapse of the former Yugoslavia. They remain economically underdeveloped, with crumbling infrastructure and limited access to the EU. China is looking to fill the void, holding annual summits with Eastern European nations under its "16+1" framework of arrangements with 16 countries in the region set up since 2012.

These efforts are bearing fruit. Construction of a high-speed railway between the Serbian capital of Belgrade and Hungary has begun, with China shouldering much of the over 3 billion euro ($3.53 billion) cost. The new rail link will serve as a key pathway between Central Europe and the Greek port of Piraeus, now operated by a Chinese state company.

Beijing has proposed investing a total of 12.2 billion euros in Eastern Europe, largely in states such as Serbia and Bosnia-Herzegovina, according to the Vienna Institute for International Economic Studies. China is planning 30 to 40 years ahead to secure a transport route to Germany and other European markets, said Deputy Director Mario Holzner. 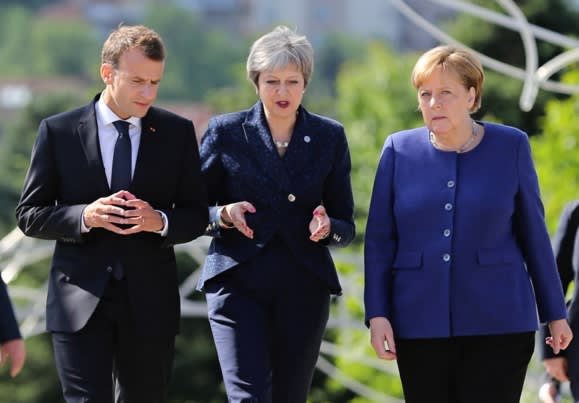 Many Western Balkan states are short on funds and have jumped at China's offers for investment. But the sudden flood of cash could lead to excessive debt and corruption. Critics also say the construction will be done by Chinese companies, and would not result in local jobs or economic growth.

"It's like a game of chess," an EU official said, expressing concern that the major powers jockeying for influence could revive ethnic rivalries in the region. For example, Russia is believed to be increasing its clout over Serbia and stoking rifts with its neighbors. Turkey is also ramping up investment in the Western Balkans.

European Commission President Jean-Claude Juncker warned last month that the EU must open up to the region or risk the return of the ethnic wars of the 1990s. The EU announced in February it will allow Serbia and Montenegro to join by 2025 if they meet certain conditions, and proposed in April to start negotiations with Albania and Macedonia. It also held a summit with Western Balkan nations in the Bulgarian capital of Sofia on Thursday, promising to cooperate with potential future members.

"I don't see any other future for the Western Balkans than the EU," European Council President Donald Tusk said after the summit. "There is no other alternative. There is no plan B."

But challenges are mounting. The EU has said Serbia must normalize ties with Kosovo, whose independence Serbia rejects, before it can join the bloc. Macedonia will have to settle a dispute with Greece over its official name.

The EU is invested in the stability of the Balkans, since the region served as a major corridor for refugees fleeing Syria in 2015. But bringing countries with strong ties to China or Russia into the fold could be a risky strategy.