Move seen as latest attempt by Beijing to isolate Taiwan Pope Francis greets the faithful as he arrives to celebrate his Weekly General Audience in St. Peter's Square.(Getty Image)

PARIS -- In a move that has sparked alarm in Taiwan, two Chinese bishops for the first time attended a meeting of Catholic clergy from around the world on Wednesday at the Vatican.

No Chinese bishops had attended the Ordinary General Assembly of the Synod of Bishops since its launch in 1967 due to conflicting views between the two countries on the power to ordain bishops.

The move is another sign of easing hard-line stance toward the Vatican by China, and is believed to be aimed at pressuring Taiwan. The Vatican is the only country in Europe that still maintains diplomatic relations with Taiwan.

The synod is held every few years to discuss topics including the importance of religion. This year, the meeting will continue until Oct. 28 on the theme of "Young People, the Faith and Vocational Discernment."

The Chinese government, which is officially atheist, severed diplomatic ties with the Vatican in 1951. Since then, a Beijing-supervised body has ordained bishops in China, creating conflict with the Vatican, which insists that the power to ordain bishops belongs only to the pope. 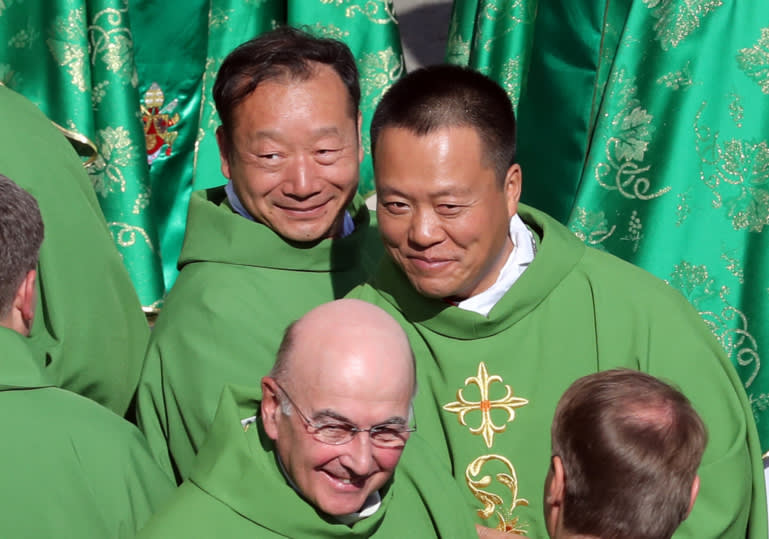 Chinese bishops John Baptist Yang Xiaoting and Joseph Guo Jincai attend a mass for the opening of a synodal meeting in Saint Peter's square at the Vatican on Oct. 3.   © Reuters

In September, however, the pope recognized the legitimacy of seven bishops ordained in China, after the fact.

The Vatican said it invited Chinese bishops to attend the meeting in the past, but without success.

The thawing of relations with the Vatican is the latest in series of moves by Beijing to isolate Taiwan. It has deepened ties with countries in Central America and Africa and successfully forced some to terminate ties with Taiwan.

For the Vatican, mended ties with China means better chances to increase the number of Catholics in China.

Taiwan is alarmed by China's overtures to the Vatican. Taiwan Vice President Chen Chien-jen is scheduled to meet with Pope Francis in mid-October to convince him of the importance of maintaining ties between Taiwan and the Vatican.