Canberra's ban on Huawei and ZTE seen to be behind move Officials at the northern port of Dalian slapped the ban on Australian coal at the start of this month and intend to limit coal imports from all sources to 12 million tons through the end of this year, a representative of Dalian Port Group confirmed Thursday. The ban, first reported by Reuters, applies to five ports overseen by the Dalian authorities: their own, Bayuquan, Panjin, Dandong and Beiliang.

China imported 280 million tons of coal last year, with Dalian handling about 7%, according to government data. Australia accounted for around 80 million tons, making it the country's second-largest supplier behind Indonesia.

Australia supplies to China thermal coal, used in power generation, and high-quality coking coal, used for steel production. Russian and Indonesian coal will not be affected by the ban, Reuters noted.

While no reason was given for the move, it comes during friction over what some in Beijing see as Canberra picking a fight over 5G security. Relations soured further after Australia canceled the permanent residency of a Chinese billionaire known to be a big spender in Australian politics.

No bans have been reported at other major ports such as Guangzhou, though clearing times for Australian coal have been prolonged to at least 40 days. Ships have been seen stuck outside Chinese ports, unable to unload their cargoes as customs processing slowed. 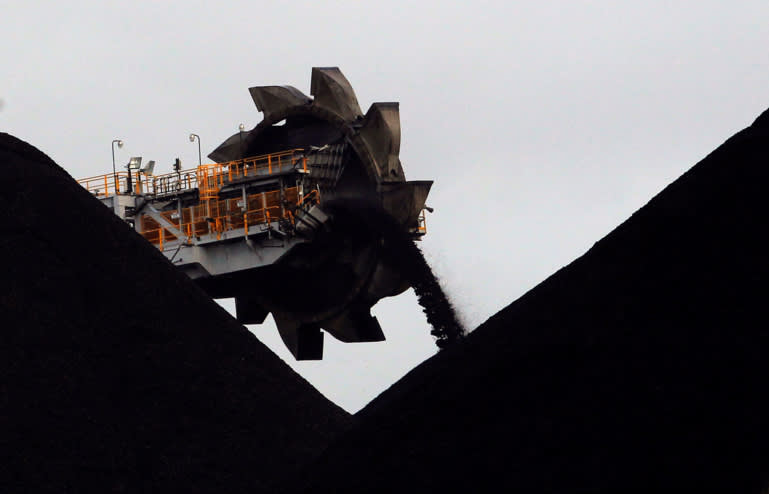 In a report released Thursday, Macquarie Research noted that Chinese customs had already been implementing a "go-slow" policy, and that it was taking up to 45 days for Australian coal to enter China.

The threat to the Australian economy is considerable. China is a key buyer of the country's resources and takes in about 20% of Australia's thermal coal by volume. News of the latest ban sent the Australian dollar falling more than 1% to $0.7086 at one point in Asian trading Thursday.

However, "With Australia exporting 23% of China's import requirements, a total ban seems unlikely," Macquarie said in the report.

Chinese Foreign Ministry spokesman Geng Shuang appeared to tacitly acknowledge the ban on Thursday. "China's customs assesses the safety and quality of imported coal, analyzes possible risks and conducts corresponding examination and inspection compliant with laws and regulations," he told reporters. "By doing so, it can better safeguard the legitimate rights and interests of Chinese importers and protect the environment."

The policy has raised concerns in Australia's government and riled its coal industry, raising the risk that bilateral ties will deteriorate further. Trade Minister Simon Birmingham said he has asked Australia's ambassador in Beijing to look into the matter. "China is a valued partner of Australia, and we trust that our free trade agreement commitments to each other will continue to be honored," he was quoted as saying by Australian Broadcasting Corp.

Birmingham stressed it was important not to jump to conclusions and said that, despite similar friction last year, coal exports to China in the fourth quarter rose year on year.

"Targeting Australian shipments and implementing quota-based, behind-the-border barriers undermines free trade and open markets," Tania Constable, CEO of the Minerals Council of Australia, told the Nikkei Asian Review. "We strongly urge China to rethink its approach to managing supply and demand and adhere to the principles and practice of free trade and open markets."

According to the MCA, the Chinese previously imposed partial customs barriers two separate occasions: once from November to December last year, and more recently from the end of January.

Nikkei staff writers Fumi Matsumoto in Sydney and Akihide Anzai in Tokyo contributed to this report.