APIA, Samoa -- As the coronavirus sweeps the globe, the remoteness of Pacific island states has been both a gift and a curse.

Of the 18 countries the virus is yet to reach, the majority are islands in the Pacific. But the very same isolation that has provided a barrier to the disease is also likely to intensify the effects of global economic contagion.

In an note to clients last month, ANZ forecast crushing blows to economies reliant on tourism and remittances as global travel grinds to a halt for the foreseeable future. The bank's remedy included stimulus measures of between 8% and 60% of nominal gross domestic product for nations including Fiji, Vanuatu, the Cook Islands, Samoa and Tonga.

For Samoa alone, a 20% stimulus package would amount to $160 million.

As non-players in international capital markets, those countries will have to look externally for loans for stimulus financing -- and that gives China a prime opportunity to expand its influence in the region through so-called "debt diplomacy."

The remote island specks of the "blue Pacific" have intermittently found themselves at the center of the great game of diplomatic contests between world powers.

From the colonial era to World War II, access to deep water ports was highly prized in a region close to Australia and Indonesia.

Now China seeks to crowd out rivals such as the U.S. In 2017 alone, Beijing announced $4 billion in aid to the region, putting it on track to overtake Australia as the preeminent donor.

Foreign policy hawks in the U.S. and Australia believe China is seeking to establish a second international military foothold to match its construction of a naval outpost in Djibouti, near the Arabian Sea, in 2016.

And now that cash infusions are desperately needed by Pacific economies, the balance of power could shift even further.

Government debts to China already make up a sizable portion of many nations' total external borrowing. According to the latest government financial statements available, loans from China make up 62% of Tonga's of total foreign borrowing; for Vanuatu its is 43%, and for Samoa 39%.

Many of these debts were brokered in times of crisis, such as when there was rioting in the streets of Tonga's capital, Nuku'alofa, in 2006. Vanuatu's external debts doubled in the three years following 2015's Cyclone Pam, according to a 2019 International Monetary Fund study.

American military leaders say recent spending has eroded the U.S.'s previous strategic edge in a region that includes a handful of its territories but where the Americans now fear a contest for air and naval superiority looms.

And China analysts now expect a further shift wrought by the coronavirus.

"China seems likely to emerge from the pandemic [as] a more attractive partner for Pacific Island states," says Dr. Hugh White, professor emeritus of strategic studies at the Australian National University. "That enhances the advantages China has already enjoyed in the contest for influence among these small but strategically important countries."

Nothing has been subtle about diplomacy in the region, on either side of the contest.

Australia, New Zealand and Canada all seek to counter China by announcing more diplomatic efforts and policy white papers with similar titles -- "the Pacific Reset," "the Pacific Step Up" and "The Pacific Uplift."

But there are fears Beijing's large foreign exchange reserves could trounce the West's diplomacy as those nations are more preoccupied by domestic concerns.

The Chinese push for influence reached perhaps its most fervent stage in September when two of the last Pacific states to recognize Taiwan severed ties within a week: Kiribati and the Solomon Islands.

Peter Kenilorea Jr., a member of parliament and head of the Solomon Islands' foreign ministry, oversaw a parliamentary inquiry into the issue of diplomatic recognition.

He told the Nikkei Asian Review that small Pacific states could be manipulated if they do enter into debt finance deals, and claims that the lobbying preceding the two nations' switch to Beijing included cash payments to opposition lawmakers of up to $600,000.

"Our institutions aren't up to scratch," he said. "These are areas that could be exploited by a powerful partner." 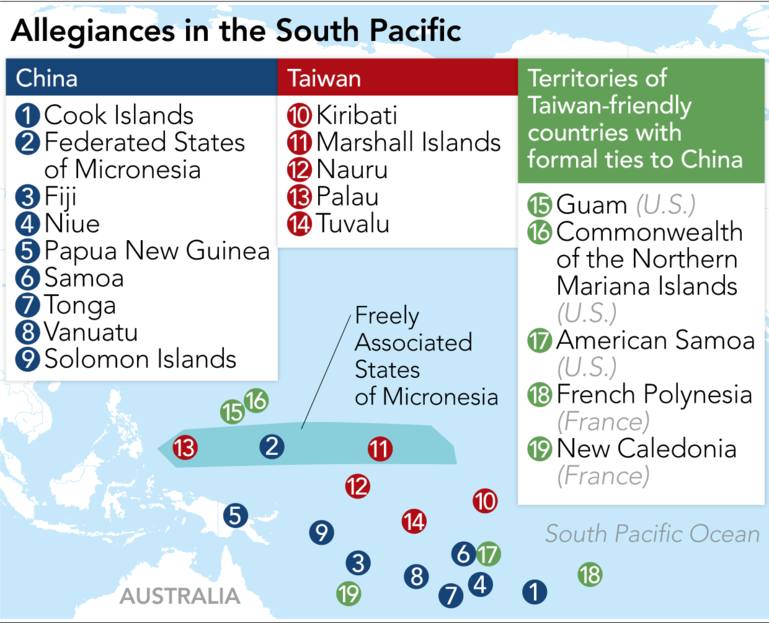 The switch of allegiance led to a flurry of activity. Two days after the Solomon Islands made the move, the SAM Group, a Chinese state-owned technology conglomerate, signed a deal to lease the nation's Tulagi island. But a public outcry led the government to scrap the deal.

Leaked correspondence from within the Solomons' finance ministry a month later showed it in discussions with a mysterious Chinese financier Terry Wong, offering a loan composed of contributions from a consortium of undisclosed donors to the value of $100 billion at an 0.05% interest rate. Reached for comment by Nikkei last week Mr. Wong said he was indisposed and did not answer further calls.

For a country with an annual GDP of about $1.3 billion, the idea of such a large loan appeared fanciful.

Harry Kuma, the Solomons' finance minister, confirmed negotiations with Wong took place, but declined to say if they produced any agreements.

"Issues such as these were not ready or not in the form to be consumed and well understood by the public," he told Nikkei in an emailed statement after declining a telephone interview.

Requests for comment from the Chinese Ministry of Foreign Affairs and several of its embassies in the region have not been answered. Kuma decries claims of cash payments to lawmakers as "baseless."

Whether countries favor China or other donors is likely to be a function of how much value they place on political expediency, according to Biman Prassad, an opposition lawmaker in Fiji.

"Borrowers and governments, especially those who display dictatorial tendencies and have a reason to avoid transparency, are always going to favor China," he told Nikkei by phone. 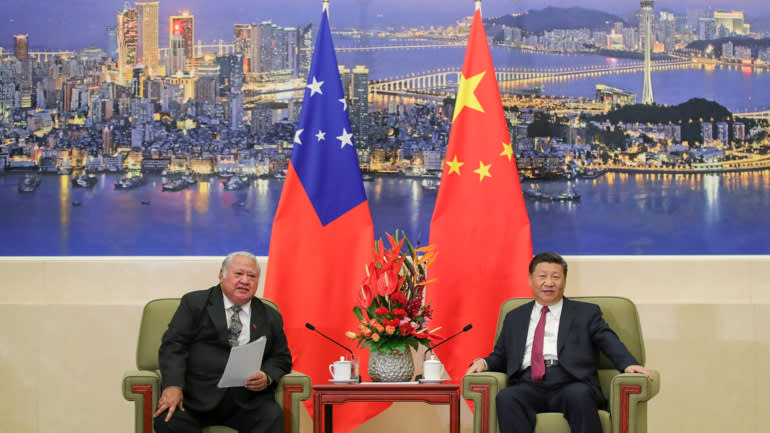 U.S. Defense Secretary Mark Esper has characterized Chinese assistance as straight up sovereignty-for-cash transactions and a steppingstone to coercion.

But China accuses America of a preoccupation with Cold War thinking.

"China is fulfilling its responsibility as the largest developing country in the world," Wang Dong, the Executive Director of Peking University's Institute for Global Cooperation and Understanding, told Nikkei. "In the process of providing aid to Pacific island countries, China sticks to a number of important principles: equality, mutual benefit, openness, sustainability, and most importantly, without any political strings attached."

On the recipients' side, some leaders privately admit to playing Australia and China against each other to maximize aid receipts.

But others have found themselves tangled up in repayment obligations.

In a region where, with few exceptions, governing coalitions are weak and prone to collapse, prudent financial management is not easily achieved.

Gary Juffa, an opposition lawmaker and provincial governor in Papua New Guinea, said as offers are certain to come, Pacific states have to become stronger negotiators.

"Countries need to learn to set parameters about what China can and cannot do," he told Nikkei.

Australia and its allies are hoping that multilateral institutions will prioritize Pacific economies that might otherwise be overlooked. Last month it lobbied for a regional assistance package at a Group of 20 meeting.

"I don't think the risk of the alternative is appreciated fully by other countries," an Australian official said.