BEIJING -- China's drive to create a 21st century military-industrial complex has hit an obstacle: A key official leading it is under investigation by the country's top anti-corruption agency, possibly for leaking state secrets to other countries.

Peng Yuxing had been the vice governor of Sichuan province and the head of a working group tasked with bringing industrial technology to the military and war-making technology to the private sector. The initiative, labeled "civil-military integration," (CMI) is one of President Xi Jinping's pet projects.

Some believe the strategy is inspired by the U.S., where talk of a military-industrial complex goes back to the days after World War II. The project has sparked alarm in Washington.

"China is seeking to reform its defense industrial base and achieve self-reliance in key technologies," said Bonnie Glaser, a senior adviser at the Center for Strategic & International Studies, a Washington-based think tank. "This is increasingly seen as a threat to U.S. national security."

As for Peng, he is under investigation for "suspected severe violations of disciplines and laws," according to the state-run China Daily. It is believed Peng was spirited away to Beijing sometime in April by Xi's potent anti-corruption commission.

His detention indicates that the U.S.-China trade war is a part of a larger struggle for power, with much of the fighting taking place in the world of intelligence and espionage.

There are several strands of intrigue. The commission usually files bribery- and other corruption-related charges, but this time it is reportedly investigating Peng for potential national security crimes. The eldest son of former President Jiang Zemin has been ensnared. And the case comes after numerous espionage-related arrests of Chinese nationals in the U.S.

Peng is suspected of allegedly leaking information to overseas intelligence agencies, according to a report by HK01, a Hong Kong news website. New Tang Dynasty Television, a Chinese-language broadcaster in the U.S., has speculated that Peng's case is linked to a spying case involving U.S. conglomerate General Electric.

His detention caught local Chinese government officials by surprise. As head of the CMI working group, Peng was a key cog in modernizing China's military and technology so that it can catch up with and surpass American might.

Could a cog of that stature really have been passing notes to the enemy?

Born in the southwestern province of Sichuan, Peng received a master's degree from Sichuan University and then joined the Chinese Academy of Sciences, the country's top research body under the Chinese government's direct control. He later studied in France and moved up the ranks upon his return, having served as head of the CAS's Chengdu Branch.

Peng in 2015 became the party secretary of Mianyang, the top post in the city. In 2017, he began to serve as vice governor of Sichuan and headed the office of the provincial commission for integrated military and civilian development.

In the 1950s, Mianyang was a symbol of "Third Front Construction," an effort to relocate research and development bases as well as factories for weapons and heavy industry. China deemed this necessary so it could prepare for war with the U.S.

Today, the hilly inland city remains home to military factories. It is also home to a collection of organizations dedicated to military technological development. In other words, it serves as a research base for China's envisioned military-industrial complex.

According to an overseas Chinese-language media report, Peng used to make frequent visits to three important research groups in Mianyang -- the Mianyang No. 9 Institute, the China Aerodynamics Research Institute and the Sichuan laboratory of the Aero Engine Corp. of China.

At about the same time that word surfaced of Peng being under investigation, Xi's graft busters and other authorities began looking into another person with ties to Mianyang, Deng Quannong.

Deng is a former chairman of Sichuan Forever Holding Group, which has received an investment from Mianyang No. 9 to develop nuclear weapons, according to a government announcement.

He has worked at Mianyang No. 9 and, many analysts say, was allegedly involved in Peng's alleged breach.

Further muddying the waters, Peng is reportedly close to Jiang Mianheng, a former vice president of the Chinese Academy of Sciences and the eldest son of former Chinese President Jiang Zemin. The two were close during their time at the science academy.

Another name in the narrative is She Baoqing, a former chairman of the Shanghai INESA Group who is also said to be close to Jiang Mianheng. In May, She was placed under investigation for bribery by Shanghai authorities.

Speculation is swirling that the series of investigations are aimed at preventing Jiang Mianheng from protecting Peng. 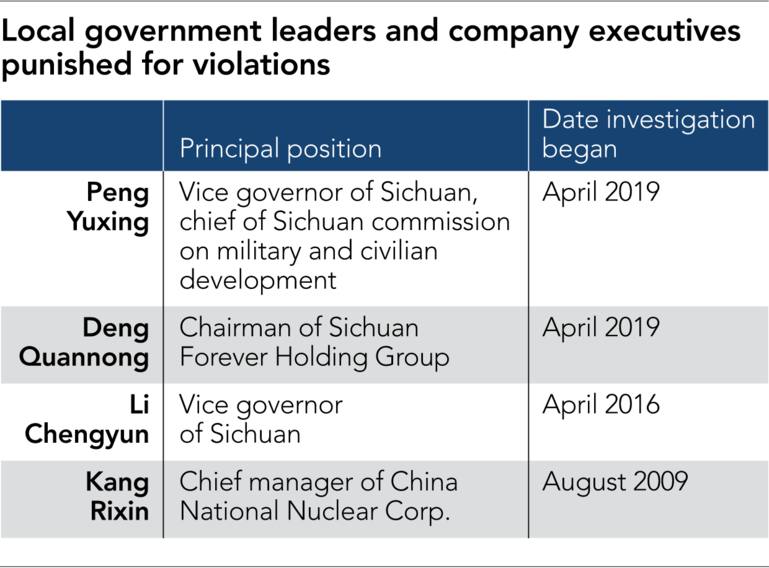 In the U.S., arrests stemming from alleged Chinese espionage have been making the news. A former Central Intelligence Agency official was sentenced to 20 years in prison for passing confidential information to a person regarded as a Chinese intelligence officer in return for cash.

In March, a Chinese woman was arrested for illegally entering U.S. President Donald Trump's Mar-a-Lago resort in Florida, prompting federal prosecutors to look into the case as possible espionage.

The U.S. is acting because China's integration strategy is "a powerful tool of the 'Made in China 2025' plan to gain hegemony over high technology." a diplomatic source in Beijing said. "In addition, Chinese threats will further increase if 5G next-generation mobile communications technology and artificial intelligence are used for military purposes."

Among those companies blacklisted by the Commerce Department is telecom giant Huawei Technologies, a global leader in 5G wireless networks.

The U.S. has "a much higher sense of urgency because the problems represented by Huawei are now so much more pointed and clear," said Elbridge Colby, director of the defense program at the Center for a New American Security, a think tank in Washington.

"We have been delaying action in hopes China would change course for many years. They are far too strong for that now and will only get stronger," he added.

Many of China's state-run enterprises engage in defense and consumer businesses, meaning Xi cannot afford to make meaningful concessions on the CMI initiative. It is his one of principal means of reinforcing the competitiveness of these companies and improving China's military capability.

This means that as China and the U.S. spar over technology and power, Huawei will not be the only prisoner.

There are no signs of the fight ending anytime soon.