MANILA -- Philippine President Rodrigo Duterte has reconnected with his "favorite hero" -- Russian President Vladimir Putin -- over COVID vaccines at a time when a new maritime feud has driven a wedge between Manila and Beijing.

The two leaders held a virtual summit on Tuesday, with Duterte ordering 20 million doses of Russian COVID-19 vaccine Sputnik V. The move diversifies Duterte's sources of pandemic support beyond U.S. and China as tensions between Manila and Beijing in the disputed South China Sea simmer.

"President Duterte and President Putin underscored the need for continuing and strengthened collaboration to defeat the COVID-19 pandemic," read a statement from Duterte's office after an "open and productive" meeting between the two leaders.

The meeting was the first known interaction between the pair since Duterte's visit to Russia in October 2019.

"It all boils down to vaccine diplomacy, because the Philippines wanted to get more supplies," said Chester Cabalza, founder of International Development and Security Cooperation, a think tank in Manila. "Maybe this is also part of the diversification tactic of Duterte [amid the current] political standing he has with China."

The Philippines is wrestling with one of the worst COVID outbreaks in Asia, and Duterte has so far turned to China for support, including the purchase of 25 million doses of its Sinovac Biotech vaccines.

China has supplied 2.5 million out of the 3 million doses currently held by the Philippines, including 1 million Sinovac jabs that Beijing has donated. But as aid arrived last month, the Philippine military reported spotting dozens of Chinese ships in Manila's maritime zone within the South China Sea. 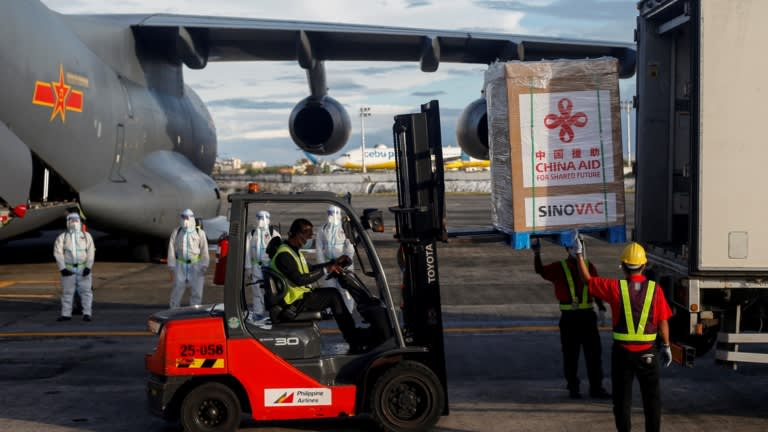 Workers load boxes with Sinovac Biotech's CoronaVac on a truck at Villamor Air Base in Metro Manila, Philippines in February 2021   © Reuters

China, which claims nearly the entire waterway, has rejected Manila's demands to withdraw the vessels, triggering a rare public verbal confrontation between Philippine and Chinese officials. Early this week, Manila's foreign affairs department summoned the Chinese ambassador in Manila over the issue, while the military deployed more Navy ships to patrol disputed waters.

"With the help of Russia on vaccines, I think there is no reciprocity [needed]," Cabalza said, explaining that Moscow does not appear to want anything in exchange for the vaccines.

"The reason why Russia is engaging with [the Philippines] is because of oil and business, nothing about the South China Sea or human rights violations of the government," which are key interests of China and the U.S., respectively, Cabalza added. Manila is also seeking as many as 40 million vaccine doses from U.S. company Pfizer, after ordering 20 million from Moderna.

Since coming to power in 2016, Duterte has been cozying up with China and Russia under his "independent" foreign policy.

The policy is widely seen as a move away from the U.S., Manila's treaty ally, which has criticized Duterte's brutal anti-narcotics campaign that has killed thousands. Asked by a reporter in 2016 about which U.S. presidential candidate he favored in that year's election, Duterte said he "cannot gamble an answer" but added, "my favorite hero is Putin."

Moscow has donated rifles and trucks for Philippine security forces and is exploring energy projects, including reviving Manila's dormant nuclear power plant, which cost the country $2.3 billion to build, but has never been used.

In late 2019, Russia's former ambassador to Manila Igor Khovaev said Putin had agreed to visit the Philippines following an invitation from Duterte. This week, Duterte renewed the invitation for Putin to come "as soon as circumstances allow, which President Putin welcomed," according to a statement from the Philippine president's office.

Last year, amid doubts from Western countries about the efficacy of the Sputnik V vaccine, Duterte became of one of its earliest backers, offering himself as a guinea pig for its clinical trials. In this week's meeting, Duterte "thanked President Putin for Russia's commitment to bolster cooperation in various areas, including in combatting the COVID-19 pandemic."

During the virtual summit, both leaders also noted improved defense and economic ties between the Philippines and Russia, which are commemorating the 45th anniversary of their bilateral relations this year. Total trade between the two countries grew to $1.1 billion in 2019, nearly three times the level of $421.6 million in 2015 before Duterte took power, according to the Philippine Statistics Authority.

Cabalza said Duterte's latest summit with Putin could also signal a change in the Philippine president's "independent" foreign policy, which was "more pro-Beijing and anti-Washington."

"As we go along the process and we see that China's behavior in the South China Sea is not changing, the [Manila] government now has thought twice -- that perhaps they cannot rely on Beijing and that's why they are calling for alliances," Cabalza said.