EU-Singapore investment deal at risk of delay over debt rule 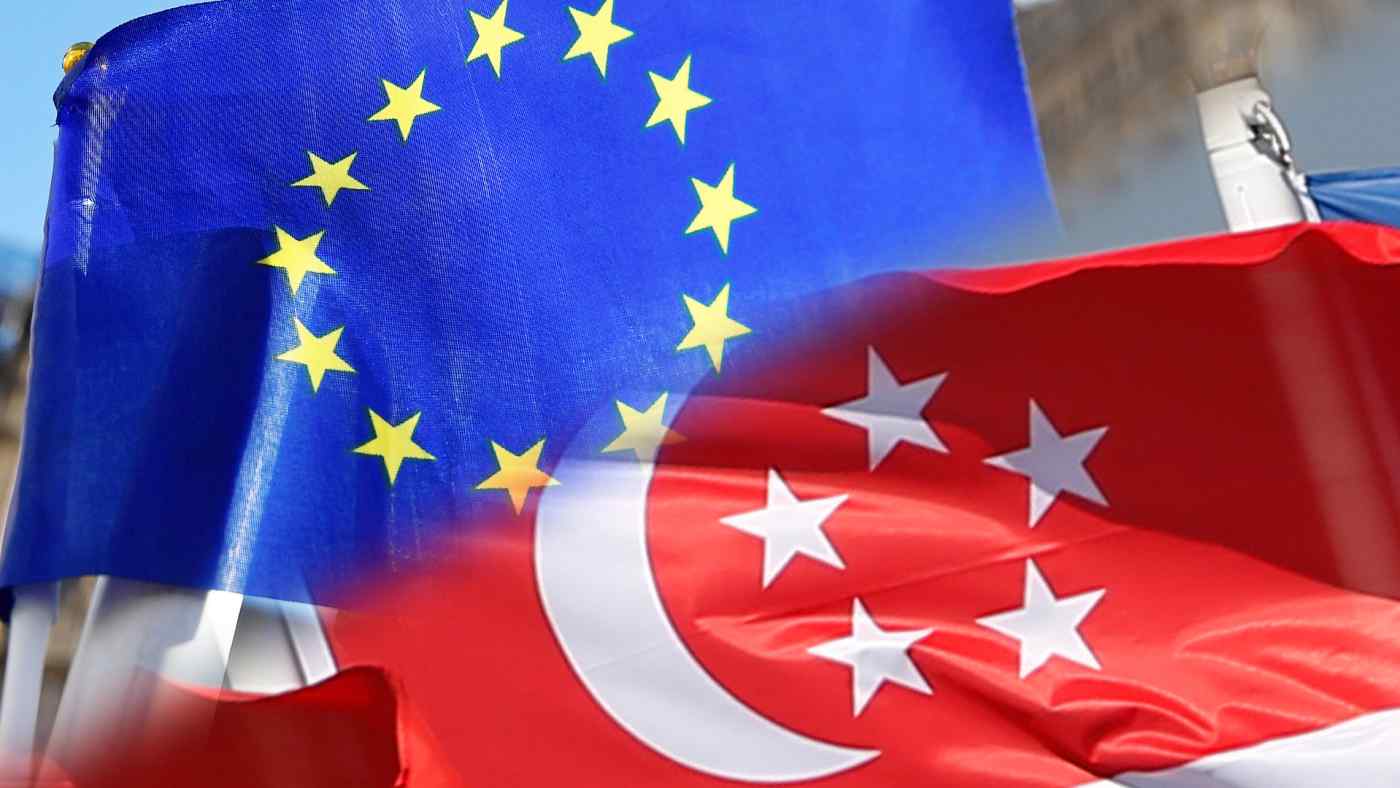 The pact is the first between the EU and a member of the Association of Southeast Asian Nations. (Nikkei montage/Reuters)
JENS KASTNER, contributing writerFebruary 13, 2019 17:02 JSTUpdated on February 14, 2019 00:11 JST | Singapore
CopyCopied

HAMBURG, Germany -- The European Union ratified a free trade pact with Singapore on Wednesday, but countries such as Germany may insist that a loophole in a related investor agreement be closed before its full implementation.

While the trade pact -- the first between the EU and a member of the Association of Southeast Asian Nations -- only needed a majority in the European Parliament for ratification, the investment deal needs to be approval by each member.

The prospect for the investor protection agreement, or IPA, being ratified has been clouded by findings that it includes a loophole that vulture funds could exploit.

A report distributed this week by the Amsterdam-based Centre for Research on Multinational Corporations to a parliament committee notes that the EU-Singapore Free Trade Agreement, or EUSFTA, extends investor protection to government bonds, in addition to corporate bonds.

Under a dispute settlement mechanism, restructuring of government debt could be challenged by investors if less than 75% of the debt is held by those who agreed to the restructuring. In other words, should a crisis occur, as happened with Greece in 2011, Singapore-based investors holding 25% of national debt in a weak EU member could, in theory, torpedo actions aimed at stabilizing the bloc.

Sven Giegold, a spokesman for the Green group in the European Parliament, told the Nikkei Asian Review that the agreement could threaten Europe financially.

Giegold said the 75% threshold is a strange limit, given that Germany -- the EU's biggest net payer -- has always insisted on 66% in other FTAs. He declined to comment on German media reports speculating that the nation's Bundestag will block the IPA and demand it be renegotiated.

"Singapore is the fourth-largest financial center in the world ... It is naive to conclude an agreement that has been so sloppily negotiated," Giegold said. "It complicates the liability of creditors in the event of state crises and could therefore pass on risks to taxpayers." Some EU members feel a loophole in the investor protection agreement with Singapore could put taxpayers at risk in the event of a state crisis. (Photo by Kurahiro Seguchi)

For Europe, the deal with Singapore has been less controversial than agreements with the U.S. -- which were put on ice by President Donald Trump -- and with Canada -- which are at risk of not being ratified by all EU members. Activists have opposed agreements with the two countries over issues such as clauses that allow investors to take countries to court.

Based on this experience, the European Commission helped EUSFTA avoid a lengthy ratification processes by separating it from the overall agreement.

The main trade deal will eliminate almost all EU tariffs on Singaporean imports within five years, with fishery and agricultural goods being notable exceptions. Products exempted from tariffs will include some that are assembled in Singapore but draw on material inputs from ASEAN nations. Singapore has already removed levies on almost all EU goods.

Bilateral trade between the EU and Singapore amounted to about 53 billion euros ($60 billion) in 2018.

The agreement is aimed at further unifying regulatory standards, opening up competition in the service sector, and enabling government procurement of goods and services in certain sectors through competitive bidding.

The influential Federation of German Industries, or BDI, has lauded the deal as sign of stability amid global uncertainty stemming from the rise of protectionism, including the U.S.-China trade conflict.

"Singapore is a gateway to Southeast Asia and one of our most important and most reliable trade partners in that region," BDI President Dieter Kempf said in a note. "The agreement stands for an open and strong Europe that sets high standards and defends its values on the international stage."