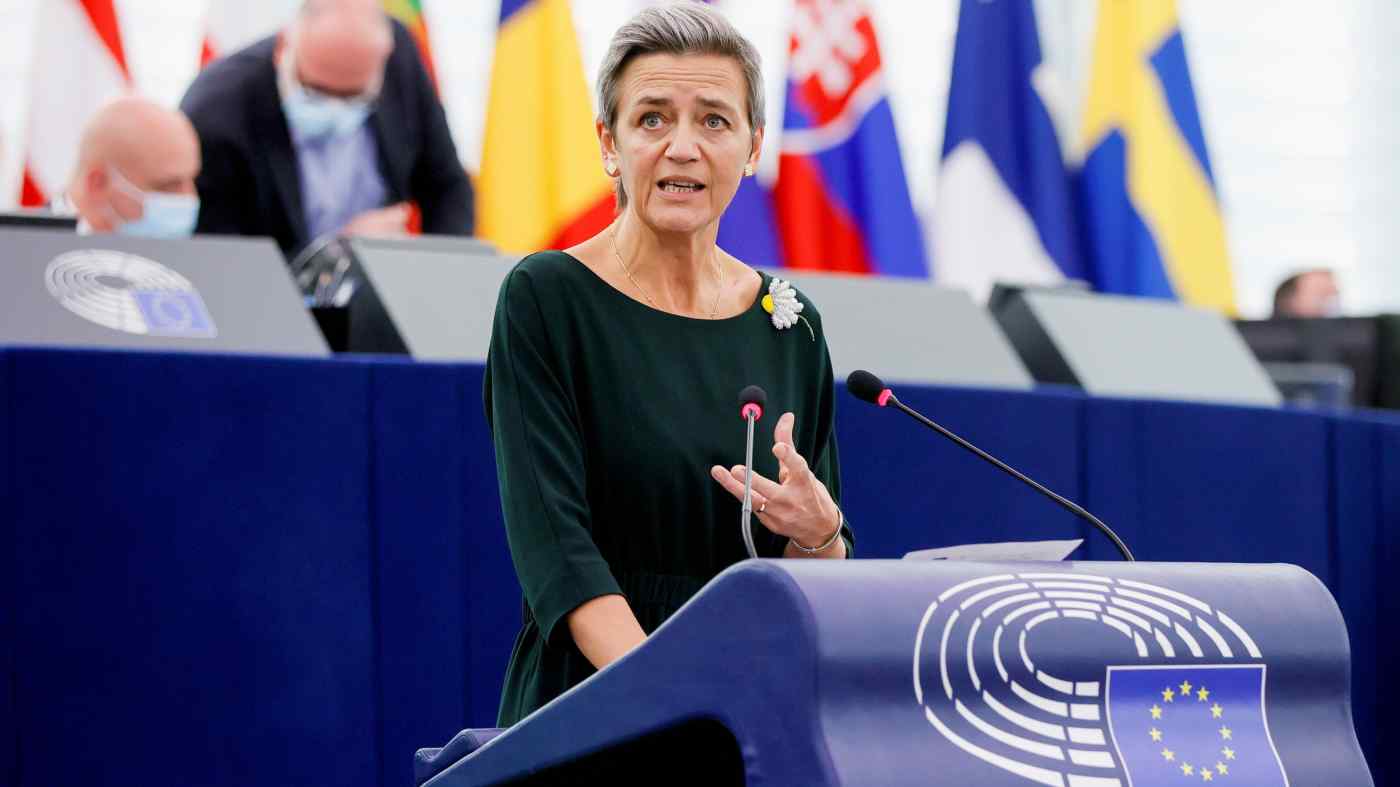 The European Commission's executive Vice President Margrethe Vestager delivers a speech during a debate on EU-Taiwan relations and cooperation at the European Parliament in Strasbourg, France, on October 19.   © Reuters
October 21, 2021 18:18 JST | Taiwan
CopyCopied

BRUSSELS (Reuters) -- The European Union must deepen ties with Taiwan and start work on an investment deal with the island, EU lawmakers said in a resolution adopted on Thursday, angering Beijing, whose similar deal with the bloc struck in 2020 has been put on ice.

With a majority of 580 to 26 votes, The European Parliament backed the non-binding resolution requesting the bloc's executive European Commission to "urgently begin an impact assessment, public consultation and scoping exercise on a bilateral investment agreement."

The lawmakers also demanded the bloc's trade office in Taipei to be renamed the European Union office in Taiwan, in effect upgrading the mission though neither the EU nor its member states have formal diplomatic ties with Taiwan, which China claims as its own territory.

"The EU parliament should immediately stop words and actions that undermine China's sovereignty and territorial integrity," he told reporters in Beijing.

China also expressed anger on Thursday after Taiwan announced Foreign Minister Joseph Wu would visit Slovakia next week on a rare trip to Europe that will also include a trip to the neighbouring Czech Republic and a virtual address to a forum in Rome.

Taiwan's Foreign Ministry expressed thanks for the support, saying the resolution will "set a new milestone" for its ties with the bloc.

Military tensions between China and Taiwan have increased, with Taipei saying Beijing will be capable of mounting a "full scale" invasion of the island by 2025.

The EU added Taiwan to its list of trade partners eligible for an investment deal in 2015, but has not held talks with the democratically ruled island on the issue since then, although Taipei is keen on striking an agreement.

A similar investment deal agreed last year between the EU and its major trade partner China has been blocked for months. The European Parliament put its ratification on ice after Beijing imposed sanctions on EU lawmakers in a human rights dispute.

The tech powerhouse Taiwan, meanwhile, has become increasingly attractive for the EU amid a global shortage of semiconductors that has Brussels lobbying for key Taiwanese chip makers to invest in the bloc as they have done in the U.S.