ADELAIDE, Australia -- Defense industry officials from Japan, Germany and France have been making frequent trips to Adelaide in recent months. The capital of the state of South Australia is a hub for military manufacturing. And the visitors are chasing the same prize: a contract to build next-generation submarines. 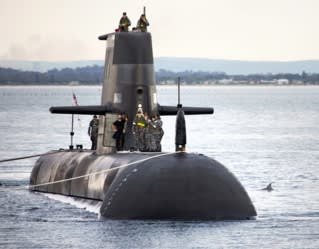 Australia's Collins-class submarines are to be decommissioned in the 2020s. (Courtesy of the Royal Australian Navy)

In February, the Australian government announced it will initiate a bidding process for contractors from the three countries. On Aug. 24, more than 30 officials from Japan's Ministry of Defense and representatives from Mitsubishi Heavy Industries will go to Australia to make their latest pitch. The order would be a major milestone for Japan, but success is not a sure thing.

About 20km north of Adelaide lies a shipyard run by ASC, a state-run enterprise once known as the Australian Submarine Corporation. From 1990 to 2003, the company built Collins-class submarines. Today, it mainly handles maintenance on the subs while also building Hobart Class Air Warfare  Destroyers. The yard is arranged with parts that have been removed from subs, many of them rusted and buckled from hard use.

Starting in 2025, the Australian government plans to decommission six Collins-class submarines and replace them with eight to 12 new models. Given the growing assertiveness of the Chinese military in East and South China seas, Australia wants to monitor a wide area stretching from the Indian Ocean to the Pacific. The 3,300-ton Collins subs are to be swapped out in favor of 4,000-ton, high performance models.

Since Australian law forbids the use of nuclear-powered submarines, the country is showing strong interest in Japan's Soryu-class vessels, made by Mitsubishi Heavy Industries and Kawasaki Heavy Industries. The Soryu, one of the world's largest diesel subs, is known for its long range and low noise levels.

Japan has a chance to snag the order because, in April last year, the Japanese cabinet lifted a longstanding self-imposed ban on arms exports. The Australian contract would be Japan's first major arms export deal. It would also help Prime Minister Shinzo Abe achieve his goal of strengthening alliances with not only the U.S. but also Australia.

Japanese defense contractors, while underplaying their keenness, are extremely eager to strike a deal, a government source said. Of Mitsubishi Heavy's fiscal 2014 operating profit of 296.1 billion yen ($2.36 billion), the defense and aerospace business accounted for just under 10%. But the company aims to nurture the sector over the next three years, and Australia, with its submarine budget of 50 billion Australian dollars ($37.3 billion), makes an attractive target.

So what stands in the way of Option J, as the Australian government refers to joint submarine development with Japan?

For one thing, Australia is concerned about employment.

The government has called on Japan, Germany and France to estimate costs and time frames for three scenarios: building the subs in Australia, building them in the contractors' countries, and some combination of local and overseas production. The estimates are to be submitted by the end of November.

Nick Xenophon, an independent Senate member from South Australia, told The Nikkei that there is only one option -- production in Australia. He said he would be happy if Japan promises to build the submarines in Adelaide. France and Germany, he added, have said they would do just that, starting with the very first unit. 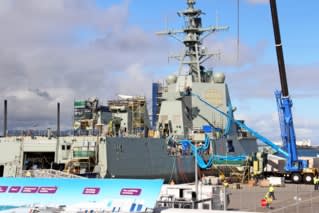 ASC builds Hobart-class destroyers like this one at its shipyard in the state of South Australia.

There is no rule stipulating that a certain ratio of Australia-produced parts and equipment must be used in the new subs. But given that the Collins class has a little more than 70% local content, Xenophon suggested 70% would be an appropriate figure for the new subs as well.

Sumio Kusaka, Japan's ambassador to Australia, in late July gave a speech in which he said, "Japan will maximize the participation of Australian industries without compromising submarine capacity, cost or schedule."

Some worry that employing Australian workers to build the vessels would create extra complications, rather than just exporting finished subs from Japan. At least, many on the Japanese side feel the initial subs should be made in Japan.

"It would be more realistic to build the first, or first two subs, at the shipyards of Mitsubishi Heavy Industries and Kawasaki Heavy Industries in Kobe," an official in Japan's defense industry said. "Japan could transfer relevant technology to Australian engineers, who would be invited to the yards, and then go on to start building the subs in Adelaide."

A submarine project requires a long-term vision. It can take five years to design one, and then another five years for construction. But immediate domestic interests are on the minds of Australian politicians, who face a general election in 2016. Prime Minister Tony Abbott, aware that it would be unfeasible for Australia to go it alone with the subs, originally gave the impression that performance was the most important consideration for choosing a contractor. He now says the three top criteria are performance, price and how much will be built in Australia.

According to an Australian government survey, shipbuilding costs in South Australia are 30-40% higher than in the U.S. But Xenophon argues the submarines should nevertheless be built in Australia, as the economic benefits will spread to related industries and tax revenue will rise. The senator's stance has helped to boost his public approval rating.

Australia's unemployment rate stood at 6.3% in July, up 0.2 of a percentage point from the previous month. The economic slowdown in China is hurting demand for Australian natural resources. The unemployment rate in South Australia was the highest in the country, at 7.9%.

Anglo-Australian resource developer BHP Billiton decided this month to shed 380 jobs at its Olympic Dam mine, which produces copper, gold and uranium. Australian manufacturers are moving their operations offshore, as high labor costs hurt their competitiveness in international markets. By the end of 2017, GM Holden, part of the U.S.-based General Motors group, will terminate auto production in South Australia. Rick Cairney, director of policy at Business SA, South Australia's Chamber of Commerce and Industry, said some 1,400 Holden workers and about 10,000 employees in the parts industry will lose their jobs.

Since South Australia has a relatively small population of 1.7 million, such jobs losses are a major blow, Cairney said.

According to the state government, the defense industry employs some 28,000 workers, directly and indirectly; the shipbuilding industry has 4,500 workers including ASC's workforce of 2,600 employees. But ASC is due to stop building destroyers in 2020, and its workforce peaked in the year through June 2014. Once the company's business is limited to maintenance work, the payroll will be whittled down to 10-20% of the level when destroyer construction was in full swing, said Steve Whetton, deputy director of the South Australian Center for Economic Studies.

Amid growing anxiety about employment, Julie Barbaro, acting chief executive of Defence SA -- a support body for the state's defense industry -- said she strongly hopes the new submarines will be built in Australia.

Germany's ThyssenKrupp Marine Systems has a history of building submarines outside its home market. Since 1960, the leading arms exporter has constructed 161 subs in 20 countries; 51 of the vessels were built in the countries that ordered them. John White, chairman of ThyssenKrupp's Australian unit, said Japanese contractors lack experience and, due to language barriers and cultural differences, could have trouble communicating with foreign clients. "It would be very difficult for Australia to really understand how the submarine design [will turn out]," he said to The Nikkei.

White argued that ThyssenKrupp has more than 50 years of experience working with Australia, having built frigates in the country. He said the German company is capable of building 12 submarines in Australia with fixed costs of less than A$20 billion. 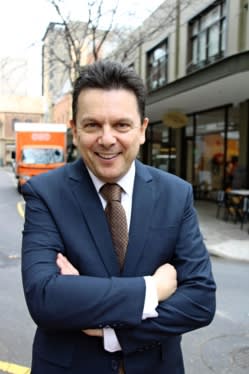 Nick Xenophon, an independent senator representing South Australia, says the nation's next-generation submarines must be built domestically for the sake of employment.

Meanwhile, French contractor DCNS says it would convert its nuclear-powered submarines, used by the French navy, into non-nuclear craft for Australia. DCNS is capable of meeting all demands presented by Australia, stressed Sean Costello, CEO of DCNS Australia. The company opened its Australian unit in Canberra in April. Since June, officials have been making the rounds of major cities to forge ties with Australian parts makers. So far, they have visited more than 300 potential partners.

There has been no such marketing offensive by Japanese companies, Xenophon said, suggesting there might be a secret agreement between Japan and Australia. The Japanese government will be involved in the bidding, while the German and French contractors are on their own.

Mitsubishi Heavy Industries is apparently trying to forge ties with ASC and plans to start contacting other Australian companies when its representatives visit the country later in August.

The Japanese contingent is believed to have the edge when it comes to submarine performance. But to seal the deal, Japan still faces the challenge of winning over the local community before the Australian government selects the winner in the first half of next year.