Turkish President Tayyip Erdogan heads a cabinet meeting in Ankara on Oct. 25. "No one, whatever their title is, can stay here if they do not respect our country’s independence and our nation's sensitivities," he told reporters afterward.   © Reuters
SINAN TAVSAN, Nikkei staff writerOctober 26, 2021 02:39 JST | Turkey
CopyCopied

"The embassies, with their new statement, have retreated from their slander toward our judiciary and country," Erdogan told a news conference after a cabinet meeting in Ankara, the capital.

The about-face came the day that the 10 embassies, starting with the U.S., affirmed their noninterference in Turkish affairs as the cabinet met to determine whether to formally designate the ambassadors "persona non grata" for calling for the release of businessman and philanthropist Osman Kavala, who has been detained for four years despite not having been convicted of a crime.

"I also want to express that no one, whatever their title is, can stay here if they do not respect our country's independence and our nation's sensitivities," Erdogan said.

The embassies said Monday that they maintain "compliance with Article 41 of the Vienna Convention on Diplomatic Relations," which states that diplomats "have a duty not to interfere in the internal affairs" of the hosting state.

The diplomatic kabuki defused an issue that could have exploded days before the Group of 20 summit in Rome, where Erdogan hopes to meet with U.S. President Joe Biden. But some analysts said that the damage is done and that the much-awaited Biden summit could be a casualty.

The flare-up began a week earlier, when the embassies jointly called for Kavala's "urgent release."

Erdogan then said in a speech Saturday that the initial Kavala statement by the 10 embassies -- representing the U.S., Germany, France, the Netherlands, Canada, Denmark, Norway, Sweden, Finland and New Zealand -- constituted "impudence" and interference in Turkey's internal affairs.

Kavala has been charged with financing nationwide protests in 2013 and being involved in the attempted coup of 2016 -- accusations he denies. The closely watched case symbolizes how Erdogan's post-coup crackdown has broadened to target critics of his administration.

When diplomats are declared persona non grata, it usually means that they are not welcome and are expelled.

The Turkish foreign ministry had kept silent on the matter. 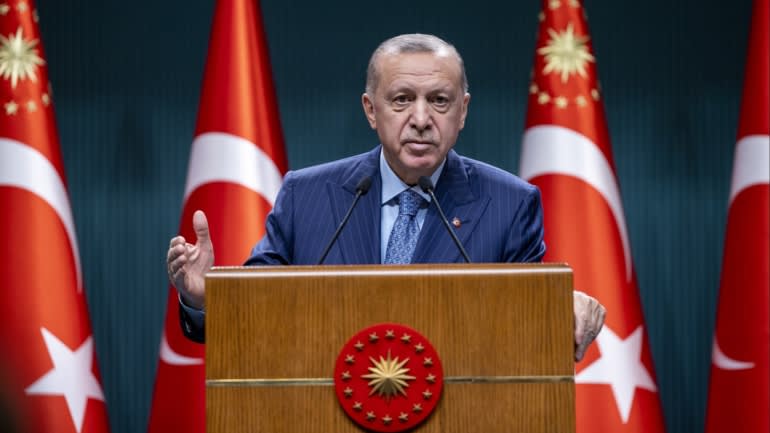 Erdogan speaks to reporters after the cabinet meeting on Oct. 25. (Anadolu Agency)

Erdogan's declaration Saturday gave investors more reason to sell the Turkish currency, pushing the lira to a record low of 9.85 against the U.S. dollar on Monday.

"Erdogan appears to have caved after seeing the market impact and understanding the diplomatic implications of his plan to oust 10 Western ambassadors," Emre Peker, Europe director for political risk consultancy Eurasia Group, told Nikkei Asia. "Pro-government media spin that the U.S. and others backtracked -- by merely saying they will continue to adhere to diplomatic norms -- is hardly a face-saving measure for Erdogan."

"The 10 ambassadors seem to have thrown us a rope to climb out of the pit we fell into," tweeted Namik Tan, a retired Turkish ambassador to the U.S. "Our side jumping on these statements is a sign that it is coordinated."

Earlier Monday, the lira rebounded strongly from record lows against the dollar and other major currencies after the Anadolu news agency quoted presidential sources as saying Erdogan had deemed the embassies' declaration of noninterference positive.

But "even without an ouster the damage is done," Peker said. "The U.S. and EU heavyweights will not forget this, and it will inform decisions going forward -- diminishing already low odds of Turkey buying more F-16s, making it harder to secure an Erdogan-Biden meeting on G-20 or COP26 sidelines, and raising the odds of coordinated human rights sanctions over the Kavala case. Basically, the whole episode is an own-goal for Erdogan with negative consequences for Turkey."

The Strasbourg, France-based Council of Europe could vote at a three-day meeting starting Nov. 30 to start the human rights body's first disciplinary proceedings against Turkey for not complying with a 2019 European Court of Human Rights order to release Kavala pending trial, Agence France-Presse reports. This could result in the suspension of Turkey's voting rights or its membership, according to AFP.

Kavala's next court hearing is scheduled for late November. He said in a statement Friday that "considering a fair trial is no longer possible under these circumstances, I believe it is meaningless for me to attend the upcoming hearings and present a defense."

Erdogan previously told Turkish reporters that he would meet with Biden at the G-20 summit in Rome at the end of the month. American officials have yet to confirm the meeting.

"I think it was already difficult before to hold that meeting; now it will be harder," Piccoli told Nikkei Asia. "Even if a meeting takes place, it would be at best a photo opportunity for Erdogan. U.S. administration unlikely to engage in meaningful talks with Turkey given its unpredictable behavior. Biden will not spend political capital to help Erdogan vis-a-vis Congress."