Europe torn over calling China out over Xinjiang 'genocide'

Lawmakers pressuring governments, which are keen to preserve economic interests HAMBURG, Germany -- Lawmakers across Europe are calling on governments to label China's atrocities in Xinjiang as genocide, putting pressure on leaders keen to maintain economic ties with Beijing.

Following declarations by the U.S. and Canada, the parliaments of the Netherlands and the U.K. have this year passed resolutions containing the word genocide, prompting Chinese embassies to hit back using language such as "the most preposterous lie of the century, an outrageous insult and affront to the Chinese people."

Lithuania's parliament held special hearings on April 22 with international experts and relatives of people imprisoned in Xinjiang, following the submission of a draft resolution by lawmakers to call the atrocities a genocide. The German parliament's committee for human rights and humanitarian aid will hold a hearing on May 17, with the involved caucuses' speakers leaving little doubt that they, too, favor the use of the word genocide.

"The overt contempt by the totalitarian communist regime for other religious groups, such as Tibetans, Uighurs and Christians, document an aggressive racism that targets millions of victims and is currently unmatched in the whole world in its extent," Michael Brand, the human rights speaker of the ruling CDU/CSU caucus, said in a note to media including Nikkei Asia.

"It is high time to face the world's biggest persecution of minorities before whole peoples fall victim to this extraordinary dangerous virus of racial fanaticism and totalitarian ideology," he added.

Margarete Bause, the speakers for the opposition Greens, and Gyde Jensen of the pro-business FDP, explicitly tied the issue to the Olympic winter games in Beijing next year, calling onto the government to ban German politicians from attending the event.

The Greens chancellor candidate for the September elections, Annalena Baerbock, is currently leading opinion polls by a comfortable margin, raising the specter of a tougher German stance against China than that of current Chancellor Angela Merkel. This could, in turn, complicate the China operations of German carmaker Volkswagen and chemical company BASF, which both own factories in Xinjiang. 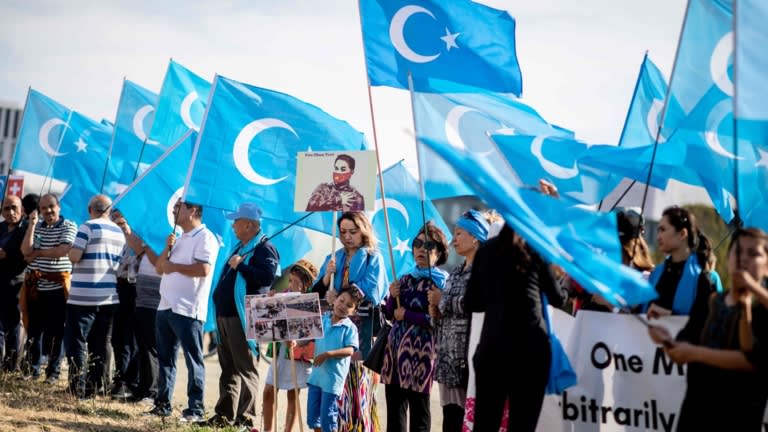 Demonstrators hold Uyghur flags next to the Chancellery in Berlin prior to a 2018 meeting between German Chancellor Angela Merkel and Chinese Premier Li Keqiang.   © AFP/Jiji

In Belgium, the Greens submitted a resolution in February in the lower house of the parliament that included the word genocide. Pressure is also building at the regional level. The City Council of Liege on April 27 passed a text calling on the federal government to condemn the abuses in Xinjiang. The Socialist Party succeeded, however, in removing the word genocide from the draft.

Liege is of particular significance for Belgium-China relations, given that the previously sleepy Liege Airport is being transformed into a major freight hub Alibaba Groupa group's Cainiao Smart Logistics Network unit that has been rapidly expanding its network of European warehouses.

"In January 2020, the Chinese Embassy to Belgium organized big events for the Chinese New Year in Liege, with the Ambassador parading with the mayor in the city for a whole day, and I guess the city council's new text means this will not happen again any time soon," said Benjamin Bodson, a research fellow at Belgium's Egmont Institute.

"Nevertheless, it is obvious that the ruling parties are wary of the consequence of labeling the Xinjiang atrocities as genocide, which is illustrated by the fact that the progress on the parliamentarian resolution has been slower than in the other countries," he added.

Bodson said the Belgian Cabinet fears that a hard stance against Beijing puts Chinese investment flow into the country at risk.

Prime Minister Alexander De Croo in January said that he was "worried about the ongoing genocide in China," but his communication team quickly said the statement as afterward was a communication mistake, and that the designation as genocide should be decided by international courts. This mirrors the official stance of Britain's Cabinet, as well as that of the Netherlands.

"It is unclear what the long-term effects will be of these events, which have increased pressure on Sino-Dutch relations," said Frans-Paul van der Putten, a senior research fellow at the Clingendael China Centre in The Hague.

"These developments are not surprising, given that the Dutch public perception of China has become more negative in recent years," he added.

According to Mareike Ohlberg, senior fellow in the Asia Program of the German Marshall Fund, it is more likely that parliaments will pass these resolutions than for governments to formally adopt them. Some of the governments in question, Ohlberg said, have been trying to downplay tensions with China in many areas, even though it is quite clear that relations are strained.

"But these resolutions at the parliamentary level show that people are paying attention, and that the Chinese government won't be able to simply make the increasing attention on its massive repression in Xinjiang go away through economic coercion or by punishing researchers," Ohlberg said.