ISTANBUL -- The 45-km canal was characterized as "crazy" by its biggest booster when the idea first surfaced a decade ago. But on Saturday, Turkish President Recep Tayyip Erdogan attended the groundbreaking ceremony of a bridge that marks the first move to build his pet "Canal Istanbul" project connecting the Black Sea to the Sea of Marmara, a massive endeavor that he hopes will win foreign support, including China's.

"We are opening a new page today in Turkey's development history," Erdogan said at the ceremony. "We see this as a project to save the future of Istanbul."

But the plan to build a canal parallel to Istanbul's Bosporus is expected to cost $15 billion and has further divided the already highly fractured country. The project also poses geopolitical issues, with speculation rife that China or Erdogan's regional ally Qatar could play a role in funding it.

The canal is designed to reduce traffic in the heavily congested Bosporus, minimizing accidents while providing speedier passage to vessels, according to Erdogan. Politically, Erdogan hopes the mega project breathes new momentum into the economy, creates jobs and boosts his popularity ahead of the 2023 presidential elections.

"Certainly we should add other strategic elements such that our country plays a more effective role in global trade and gain a greater share of transportation and logistics corridors," Erdogan added.

By 2050, 78,000 vessels are projected to use the Bosporus, the president said. However, official data shows traffic in the strait has steadily declined since 2007, when 56,000 vessels passed through. Annual traffic now stands around 40,000 vessels. Turkish President Tayyip Erdogan greets his supporters as he arrives at the groundbreaking ceremony of Sazlidere Bridge over the planned route of Canal Istanbul, in Istanbul on June 26.

The controversial project is dividing the Turkish public on many fronts, encompassing environmental and financial issues as well as national security. Opposition parties are fiercely against the canal, mounting threats such as vowing not to pay for it and pledging to distance themselves from any country or company who backs it should they come to power.

According to a poll by Istanbul Economics Research, 58% of respondents disapprove of the project, up five percentage points compared to seven months ago.

At the groundbreaking ceremony, Erdogan said the project would cost $15 billion including the six bridges to be built over the canal which alone is estimated to cost $1.4 billion and will be completed in six years. "Canal Istanbul will finance itself from income generated by the passing ships, the ports to be built and other sources," Erdogan explained. He described the project as "world-class" and not taking "anything from state coffers."

Earlier in June, the Turkish president floated ideas about building the canal through a scheme financed by the private sector and supported by income generated from the 500,000 houses slated to be built along its route.

However, experts have questions Canal Istanbul's commercial feasibility, pointing to the declining traffic over the past 15 years and to the safe and nearly free-of-charge passage for commercial vessels from the Bosporus and Dardanelles guaranteed under the Montreux Convention of 1936.

Retired Turkish admirals and diplomats have also warned the canal could trigger an unwanted challenge to the Montreux Convention, which further regulates the passage of military vessels from the Turkish Straits, potentially upsetting delicate balances, especially in the Black Sea. The government denies this would happen.

Ahead of the ceremony, transportation minister Adil Karaismailoglu on Friday told CNN Turk TV that Chinese, Russian, Dutch and Belgian companies have expressed strong interest in financing the project and that these efforts would be completed this year. Karaismailoglu implicitly drew parallels to China's Belt and Road initiative and said the canal project would significantly boost Turkey's share of global trade.

Turkey has been a strong supporter of the ambitious Beijing-led initiative and signed a memorandum of understanding with China in 2015 to align its own "Middle Corridor Initiative" linking Turkey and Europe with China via a Trans-Caspian, east-west route. In 2017, President Erdogan attended a forum in China on the Belt and Road, and in 2019, on the sidelines of his visit to Beijing, he told China's Xinhua News Agency that the two initiatives were in "natural harmony."

China's economic presence in Turkey has grown as the latter's relations have frayed with the EU and U.S. In 2020, China was Turkey's largest import partner, bringing in $23 billion for the year, up 20% from the previous year.

In 2015, a consortium of state-owned Chinese companies acquired a major container terminal in Istanbul for almost $1 billion.

Bloomberg reported in March that China Merchants Group and other partners were closing in on a deal to acquire an initially agreed majority stake in the third bridge spanning the Bosporus and its connecting roads for $688 million. However, the deal was said to have been interrupted by the pandemic at the end of 2019. According to the report, the deal has been revived this time including refinancing for $1.6 billion of the original loan to the bridge operator by banks including Industrial and Commercial Bank of China, Bank of China, and China Merchants Bank.

The high-profile deals illustrate that Chinese investors are not indifferent to the infrastructure developments of Istanbul, Turkey's largest city, home to more than 15 million people and geographically linking the Asian and European continents.

Yet Turkey has not officially decided on either the tender or the business model for the project, not even announcing a time frame for the tender regarding the canal itself.

Turkish media have thus far speculated about the possible involvement of Chinese and Qatari investment and financing for the project. For example, a Qatari royal family member has reportedly already acquired land along the canal's route. 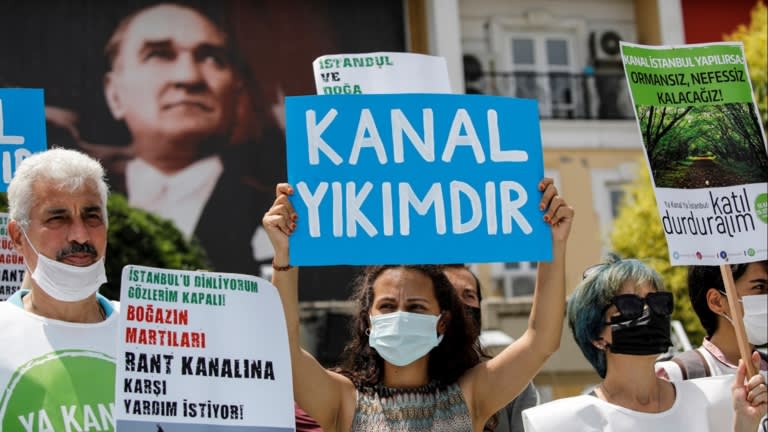 According to Ali Merthan Dundar, director of the Asia-Pacific Research Center at Ankara University, "In line with the Belt and Road initiative, the Canal Istanbul project may draw interest from China both in terms of financing and its construction and operation, provided that they receive attractive incentives for involvement."

Reuters reported in April that some local banks were reluctant to finance the canal project citing investment risks as well as their status as signatories of the U.N.-backed Principles for Responsible Banking framework that calls for avoiding harming people and the planet. Given the canal project has come under fire from environmentalists and academics for causing potentially irreversible damage to the environment, many bankers are pessimistic that the project can get Western financing.

A day before the groundbreaking ceremony, Istanbul's mayor, Ekrem Imamoglu, who belongs to Turkey's main opposition party and actively campaigned against the canal before winning office in 2019, held a press conference at a dam site that is to be replaced by three other dams in the project.

"Erecting a leg of bridge here which was in fact planned way back as part of a highway project and calling it a groundbreaking canal is an effort to save the day politically," Imamoglu said. He called the ceremony "an illusion" and vowed to continue fighting the project.

"We are facing the risk of damaging the environment, people and Istanbul as well as the risk of destroying the entire Sea of Marmara," Imamoglu continued. The sea is currently grappling with a slimy substance called sea snot caused by pollution and rising water temperatures.

This time, however, Canal Istanbul is widely regarded as Erdogan's greatest infrastructure challenge, coming as it does in the midst of an ailing economy waylaid by the coronavirus, a plunging Turkish lira, and cratering public support approaching record lows, according to multiple polls.

It remains to be seen whether Erdogan is serious about advancing the project or China will ultimately get involved after supplying Turkey more than 34 million doses of coronavirus vaccines so far as well as much-needed foreign exchange infusion for the country's depleted central bank reserves. Erdogan on June 13 announced a new deal between the two countries' central banks just before his departure for the recent NATO summit and his meeting with U.S. President Joe Biden. Under the deal, the existing currency swap arrangement increases the limit to $6 billion from $2.4 billion.

According to Selcuk Colakoglu, director of the Turkish Center of Asia Pacific Studies, a project of this magnitude could only be financed by a handful of countries, whether G-7 members or China, and even they have become much more selective recently. "Whichever country is willing to finance this project, it will not be a purely financial decision," Colakoglu said. "It will also come with political and diplomatic strings attached, where the financier will seek a maximum degree of foreign-policy strategy coordination."