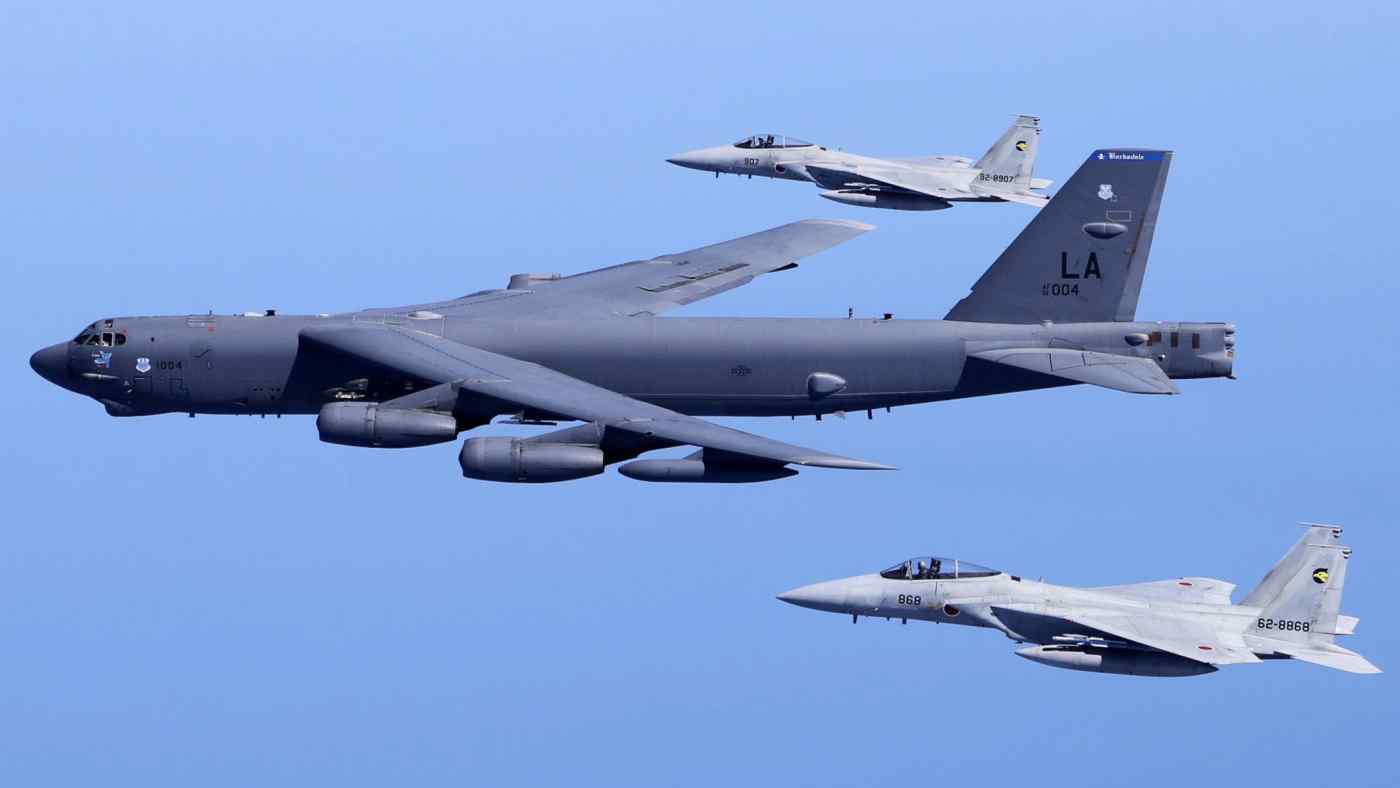 TOKYO -- The U.S. and Japan showcased the strength and unity of their alliance during last week's summit, but one particular sentence in the joint leaders' statement that followed the meeting conceals a sore spot in the relationship.

The document said that Japan "resolved to bolster its own national defense capabilities." This commitment includes modernizing the Air Self-Defense Force's F-15 jets in a plan seen as crucial for maintaining air superiority.

But Japan put spending for the upgrade on hold after Washington last year tripled the price tag from its initial estimate.

During their first in-person meeting about a month ago, Defense Minister Nobuo Kishi urged American counterpart Lloyd Austin to start afresh with negotiations on the F-15 upgrades, asking for "a little more consideration." Delays could harm Japan's defense capabilities, he said.

Japan's five-year defense plan starting in fiscal 2019 calls for modifying some of the ASDF's 200 F-15s to carry long-range missiles and electronic warfare systems. The U.S. originally estimated the front-end costs involved, such as designing the upgrades and buying the required production gear, at 80.7 billion yen ($745 million at current rates).

But Tokyo was informed by the prior U.S. administration that the price had surged to $2.2 billion. Parts used in the electronic warfare equipment had run out, and special steps were needed to make them, the explanation went.

The sudden hike felt off to Kishi, who has experience doing business with foreign companies from his more than two decades working at a major trading house. Kishi directed ministry officials to tell Washington that Tokyo "cannot spend money it doesn't have," and to find a compromise. This is not the first unexpected hike that Tokyo has been asked to swallow. Unlike other cross-border transactions, many purchases of defense equipment from the U.S., including the bulk of the F-15 upgrades, go through Washington's Foreign Military Sales program. Buyers must sign a contract with the American government, rather than directly with the manufacturer, which means that terms can and often do change.

For example, while price estimates are given at the time a deal is reached, the actual price can surge afterward once the manufacturer evaluates the deal. Deliveries sometimes are delayed due to circumstances on Washington's end.

Tokyo encountered such issues recently with the Aegis Ashore missile defense system. The price tag was estimated at $740 million per battery at the time of the decision to deploy them, but later jumped significantly, ultimately leading Japan to shelve the project.

The Self-Defense Forces may have little choice but to accept unfavorable terms in order to access cutting-edge American technology. But critics contend this puts Tokyo under Washington's thumb.

Kishi's call to start over with negotiations on the F-15 upgrades appears intended to encourage a rethink of an arrangement tilted in Washington's favor. A lack of transparency and trust surrounding the procurement process will make it harder to overcome a difficult security situation, particularly if tensions between the U.S. and China escalate further.

The F-15 project is an important element of Japan's pledge in the post-summit joint statement to bolster its ability to defend Japanese territory.

The long-range missiles would let Japan strike an enemy trying to land on an isolated island while remaining out of attack range. That is seen as key to defending the Tokyo-administered Senkaku Islands, which are claimed by China. The electronic warfare systems also would improve the alliance's deterrence capabilities in the region.

The halt on the F-15 upgrades seems finally to have spurred Washington into action. The two sides have reportedly communicated almost daily with calls, emails and virtual meetings to get the project moving.

"We want to exchange ideas to lower the price to a point that the public can accept," a senior defense official said.