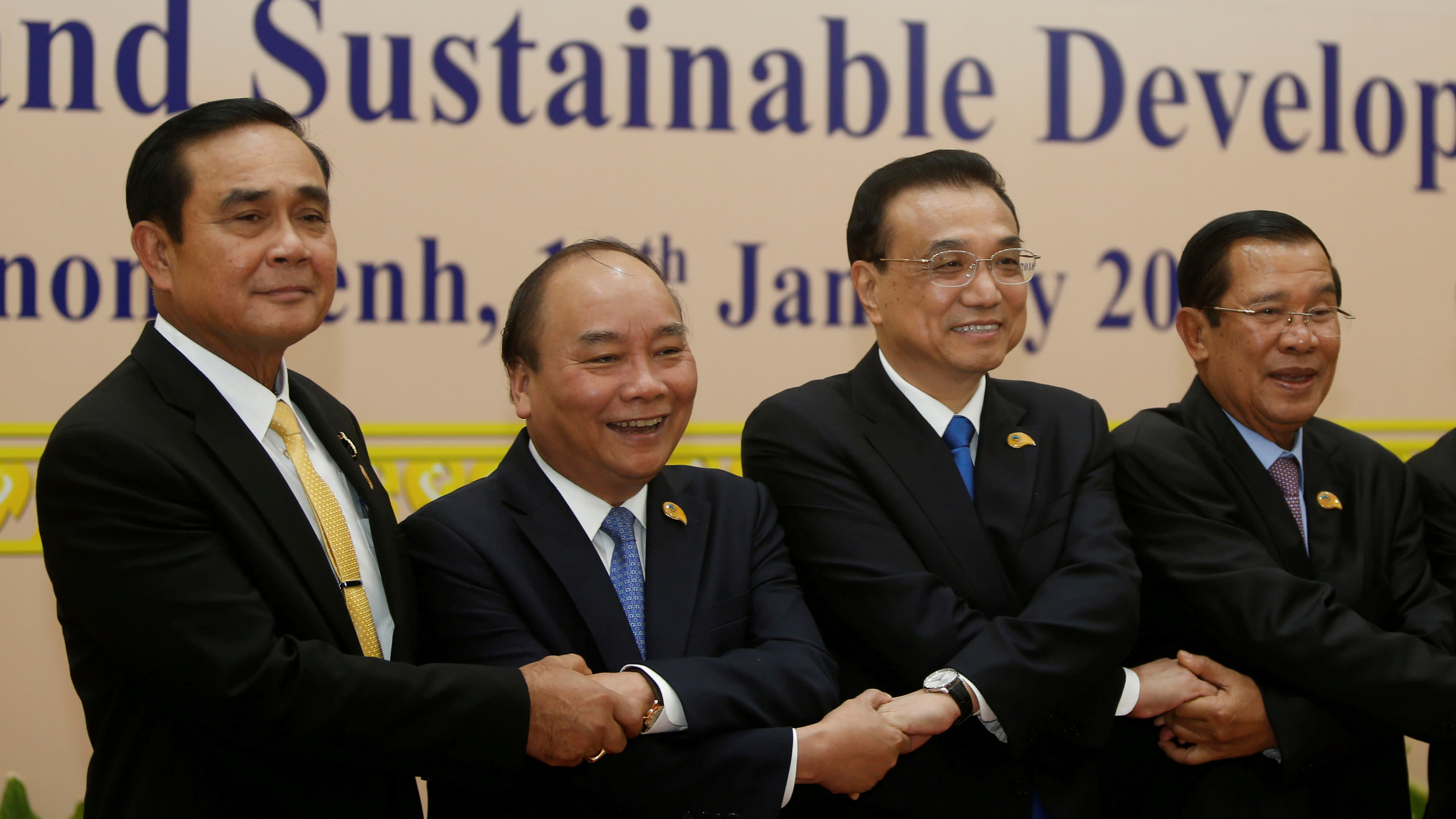 Li celebrated his embrace of multilateralism with an op-ed penned specially for a Cambodian newspaper, and basked in China's triumph with its five southerly neighbors, all of whom share the Mekong, Southeast Asia's longest river.

The article, published on the eve of Li's arrival in Cambodia on his first overseas trip in 2018, set the tone for a two-day summit in Phnom Penh, the Cambodian capital, for the sub-regional initiative.

Firmly in the driver's seat, China has committed to spending nearly $12 billion in loans and grants in Cambodia, Laos, Myanmar, Thailand, and Vietnam.

By the end of the 2nd Lancang-Mekong Cooperation Summit (the headwaters of the 4,660km Mekong are in China, where it is called the Lancang), government leaders had agreed to consider a second batch of Chinese-funded cooperation projects. These will build on 132 projects approved after the first summit in early 2016.

Li projected an image of modern China -- a high-speed train -- to tout the summit's success. The Lancang-Mekong Cooperation mechanism, he told his counterparts, is similar a high-speed train engine "pushing the cooperation between China and five Mekong countries into the age of high-speed rail," the Khmer Times reported. In December, Wang Yi, China's foreign minister chose a more muscular image to make a similar point -- the LMC is progressing because it is being driven by a "bulldozer" -- at a meeting in China with his counterparts from the Mekong basin. Both have a point, and Beijing's carrots are being gobbled up by China's economically weaker southerly neighbors. So far, nearly 60% of China's concessional loans have been pumped into the five Mekong basin countries for a mix of infrastructure and industrial projects. Thailand has also sought funds for new conservation initiatives, and  Cambodia is looking for cash to combat land degradation. For China, this initiative has become another platform to push its Belt and Road Initiative, an ambitious land and sea network.

Hun Sen, Cambodia's increasingly autocratic prime minister and China's strongest ally in Southeast Asia, was quick to welcome further Chinese largesse. "This is one of the most tangible and defining characteristics of the LMC being a project and cooperation-based mechanism, and not a mere talk shop," Hun Sen, who co-chaired the summit, said in his opening remarks.

The LMC's vision for regional economic integration helmed by China adds to its growing economic influence across the five countries of mainland Southeast Asia -- all members of the Association of Southeast Asian Nations, a 10-member regional bloc. Trade between China and the Mekong countries hit $17.5 billion in the first 10 months of 2017, up by 15.6% for the same period year on year, according to Chinese government reports. Chinese investments in the five countries over the same period in 2017 rose to $2.68 billion, a 22% increase year on year, according to Xinhua, the official Chinese news agency.

China's multilateral foray down the Mekong is sending ripples because of one of its broader implications -- another power imbalance. After all, China's cascade of eight dams, built unilaterally since the early 1990s on the Lancang, have reduced the water flow to the Mekong basin countries during the annual dry season, occasionally stirring up tension. Consequently, lower Mekong countries have had to depend on China's goodwill -- not international, trans-boundary rules -- to receive water. Cargo ships heading north to China along the Mekong near the Golden Triangle where Laos, Myanmar, and Thailand meet.   © Reuters

Environmentalists worry that the LMC will further reduce the ability of the lower Mekong countries to pressure China to release water from its dams during severe droughts -- as in 2016, precipitating anti-Chinese rage in Vietnam particularly. That year, Hanoi was sufficiently irked to take the undiplomatic step of downgrading its presence at the first LMC summit.

"Being located downstream, the lower Mekong countries have long struggled to negotiate with China on its dam construction upstream," said Carl Middleton, director of the Center for Social Development Studies, at Chulalongkorn University, in Bangkok. "A weakness of the current Lancang Mekong Cooperation Framework's approach is that there appears to be little interest by China to develop specific written rules for trans-boundary water sharing." 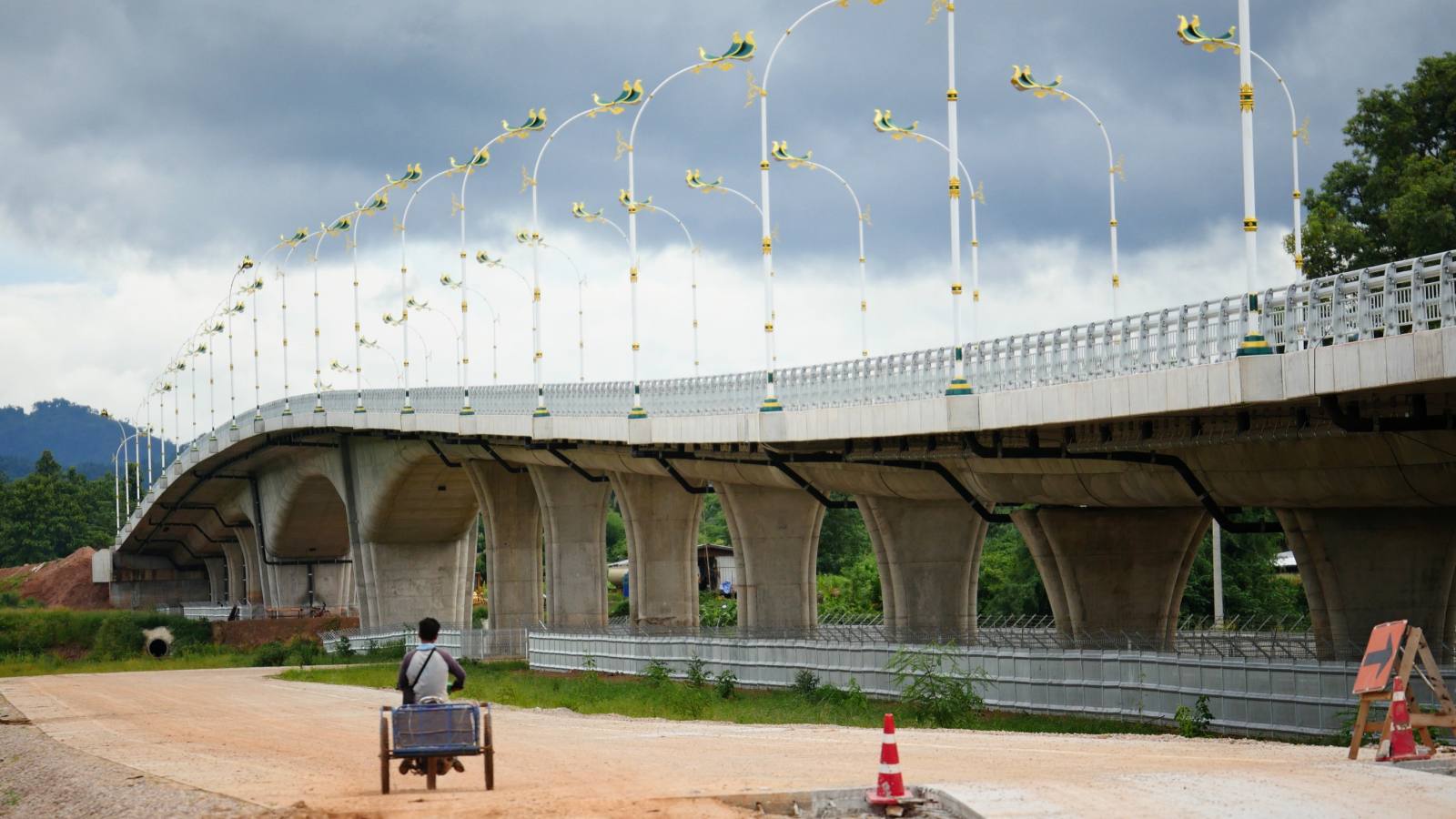 China's determined push into mainland Southeast Asia lays bare the limits of existing Mekong initiatives supported by Japan, the U.S. and other Western nations, all of which focused on the five basin countries but shut out China. They pose little challenge to China, and are short on the verbal fireworks over another body of water in Southeast Asia -- the disputed South China Sea.

As one Southeast Asian diplomat put it: "China is rushing to occupy any vacuum to entrench itself when everyone else is distracted or not interested." He described it as a "tried and tested" diplomatic ploy and no different to President Barack Obama's second term in office when the U.S. refocused its efforts elsewhere enabling China "to build up its position in the South China Sea." President Donald Trump is giving Beijing more room in that vein, as he turns his back on multilateralism.