Fresh off gold mine seizure, Kyrgyzstan president heads for Russia ALMATY, Kazakhstan -- Kyrgyzstan's populist president heads off to Russia on Monday as problems mount on the home front, following the seizure of a gold mine run by the country's biggest private investor and deadly clashes along the disputed border with Tajikistan.

President Sadyr Japarov will fly into Sochi on Russia's Black Sea coast for his second meeting with Russian leader Vladimir Putin in three months. What, if anything, he will extract from the trip remains unclear.

What is clear is international criticism of the Japarov government's seizure of the Kumtor gold mine, the biggest contributor to the country's beleaguered economy, along with the fallout from the border battle that left dozens dead.

On May 17, the Kyrgyz government used recently approved powers -- legislation hastily rushed through parliament earlier this month -- to impose external management on the gold mine. Tengiz Bolturuk, who quit the board of the mine's Canadian operator Centerra Gold, has been appointed Kumtor's temporary external manager.

Observers were not surprised by the move to take control of the lucrative mine, regardless of the harm it does to Kyrgyzstan's global image.

"Kumtor has always been the source of political drama in Kyrgyzstan. And Japarov's popularity began with this gold mine back in 2012 when he launched a campaign to nationalize it," Temur Umarov, a consultant at the Moscow Carnegie Center who specializes in China and Central Asia, told Nikkei Asia.

"Of course what is happening with Centerra Gold right now will frighten all of the investors (and potential ones) in Kyrgyzstan," he continued. But he said Japarov calculates "he will gain more money from nationalizing the biggest gold mine than spending money on reforms that will not guarantee a lot of investments to the country immediately." 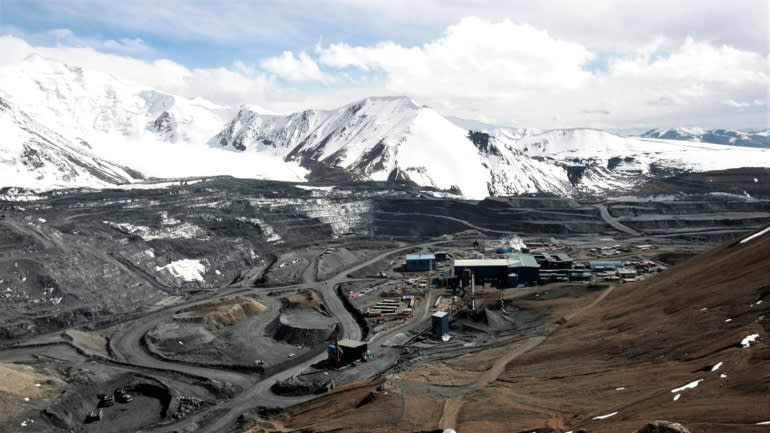 The Kumtor gold mine in Kyrgyzstan: Japarov's government effectively took control of the mine this month.   © Reuters

As of the end of 2020, Kyrgyzstan owed $4.2 billion to external creditors, including $1.8 billion to the Export-Import Bank of China. Facing the heavy debt and economic pressure from the global coronavirus downturn, Umarov argued that Japarov is not interested in working toward attracting investors. "He needs the outcomes of his actions now and he doesn't care that much about the future of the country."

Japarov rode to power last fall on a wave of populist nationalism and is also under pressure to deliver on his campaign promises -- from weeding out corruption and promoting the rule of law to achieving economic prosperity.

"Society is starting to realize that the promises he has given are unrealistic," Umarov added.

"The recent standoff on the border with Tajikistan has also led to a wave of criticism of his policies. So Japarov wants to compensate for the support that he's lost and double down on nationalistic sentiment. Kumtor here is a perfect object for this purpose," the analyst concluded.

In an opening salvo on May 7, Centerra subsidiary Kumtor Gold Company was fined $3 billion after a Kyrgyz court ruled it had violated environmental rules. This opened the way for the Kyrgyz authorities to put the mine under external management for a short period to rectify these alleged environmental and safety violations in line with the rushed-through legislation. The company was also handed a $170 million tax bill.

A Centerra Gold statement on May 17 announcing the seizure said it was taking the case to international arbitration while holding out an olive branch. "We remain willing and available to engage with the government in a constructive dialogue on the matters it considers to be the subject of dispute."

On Thursday, Bolturuk -- the external manager and a citizen of both Kyrgyzstan and Canada -- said "Kyrgyzstan aims to build real partnership relations only if Centerra Gold is ready to comply with Kyrgyz legislation and international standards."

Kyrgyzstan's two biggest trading partners, China and Russia, also control gold mines in the mountainous Central Asian state, but they are unlikely to be worried about the government muscling in on their interests. In March, the Russian-backed Jerooy gold mine, Kyrgyzstan's second-largest, started production.

China is more concerned with security issues. In 2019, clashes broke out between local residents and workers at the Chinese-run Solton Sary gold mine. In the political turmoil of last fall, a number of Chinese-led projects were attacked by angry mobs demanding cash.

The gold mine dispute is not the only problem Japarov's fledgling administration is grappling with. On April 28, simmering tensions along the border with Tajikistan turned into a battle between the two countries' armed forces that left more than 50 dead, hundreds injured, thousands displaced from their homes and widespread damage to property in villages on both sides of the disputed boundary.

Thirty years after the collapse of the Soviet Union, just under half of the nearly 1000 km border has still not been delineated. After independence, the area encompassing the Fergana valley was divided between Kyrgyzstan, Tajikistan and Uzbekistan with a patchwork of exclaves populated by other ethnic groups left in neighboring states.

The deadly conflict in April, which spread to other villages along the border, was sparked by a dispute between villagers over access to scarce water resources. Tensions had been stoked by Kamchybek Tashiev, the head of Kyrgyzstan's State Committee for National Security, in late March.

Tashiev, Japarov's fellow nationalist firebrand, suggested Tajikistan drop claims for land around the fertile ethnic Tajik exclave of Vorukh or agree to an exchange for other, less productive land. Shortly after, Tajik President Emomali Rahmon headed to Vorukh to reassert its status as an inviolable part of Tajikistan.

With an uneasy cease-fire holding along the border, talks are expected soon between Japarov and Rahmon in the Tajik capital, Dushanbe, to try and resolve the issue.

In a rare bit of good news, Kyrgyzstan this month snagged a $54 million handout from China to support its embattled economy. China also pledged 150,000 free doses of COVID-19 vaccines to help with Kyrgyzstan's stuttering inoculation drive.

While Japarov may be hoping for more good news from his trip to Russia, he might remember the fate of the last Kyrgyz leader who visited Sochi. Less than three weeks after visiting the Russian resort city last fall, former President Sooronbai Jeenbekov was unceremoniously turfed out of office.