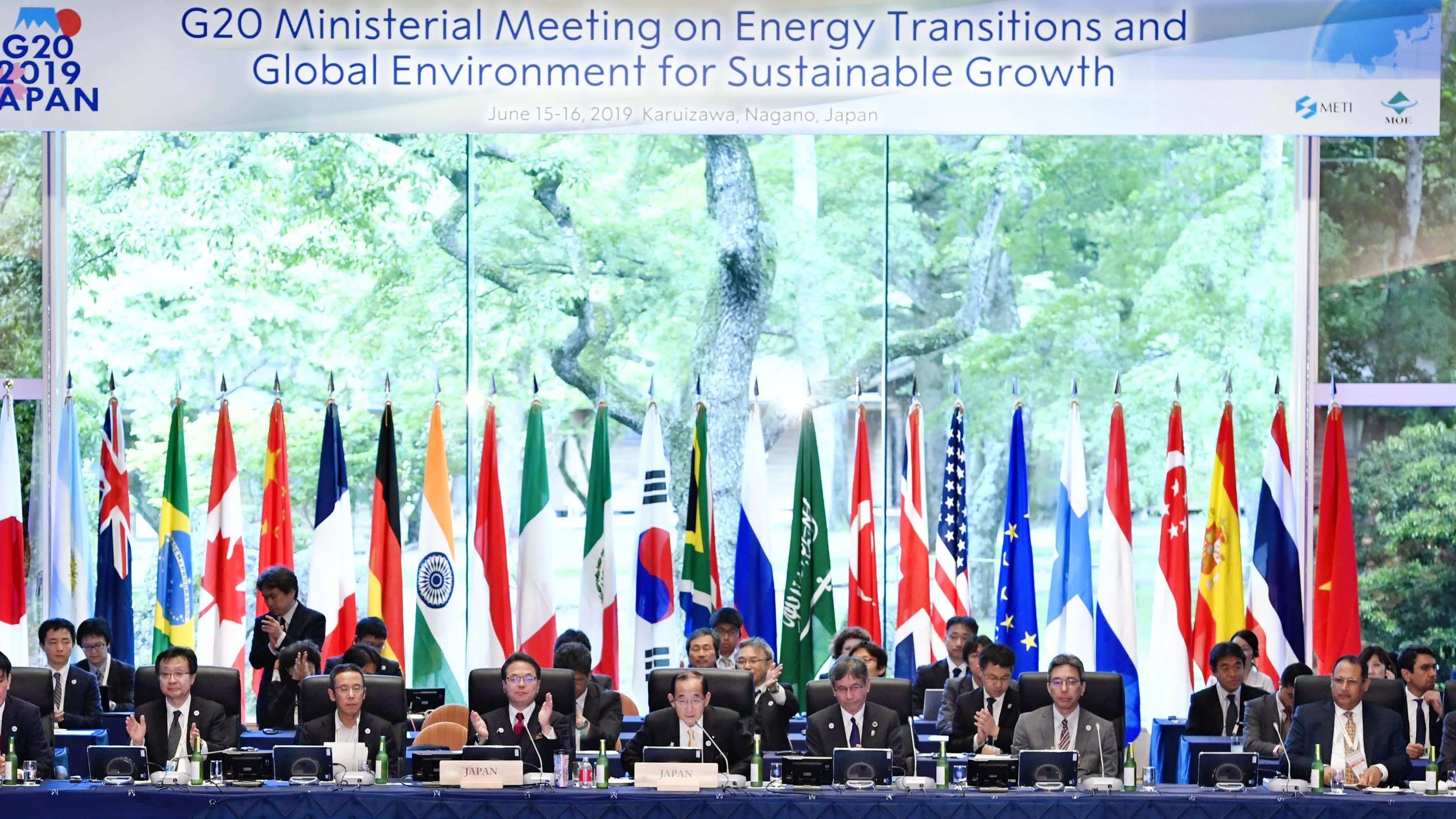 Environment ministers of the Group of 20 major economies met at Karuizawa, Japan, and agreed Sunday on the creation of an international framework to take voluntary steps to reduce plastic pollution in the ocean.   © Kyodo
June 16, 2019 18:30 JST | Japan
CopyCopied

KARUIZAWA, Japan (Kyodo) -- The Group of 20 major economies agreed Sunday on the creation of an international framework that calls on members to take voluntary steps to reduce plastic pollution in the ocean, one of the world's most pressing environmental threats.

The agreement came after a two-day meeting of G-20 environment and energy ministers at which discussions also focused on energy security after attacks on two oil tankers in the Middle East that sparked a surge in oil prices.

"Marine litter, especially marine plastic litter and microplastics, is a matter requiring urgent action given its adverse impacts on marine ecosystems, livelihoods, and industries including fisheries, tourism, and shipping, and potentially on human health," said a communiqué issued following the meeting in the central Japan resort town of Karuizawa.

Japanese Environment Minister Yoshiaki Harada, who co-chaired the meeting, called the agreement a "major achievement" in the lead-up to a G-20 leaders' summit later this month.

"We will continue to vigorously seek solutions to such global issues," he told a news conference.

The ministers stressed the importance of realizing a "virtuous cycle" of environmental protection and economic growth, driven by "breakthrough innovation" in the private sector with support from governments.

But the participants were not on the same page on all of the environmental issues, with the United States, which has announced its withdrawal from the Paris climate accord, refusing to endorse a commitment in the communiqué to cut greenhouse gas emissions.

The document ended up suggesting that countries, excluding the United States, reaffirm their promises to fully implement the accord that aims to keep the rise in average global temperatures to well below 2 C compared with preindustrial levels to mitigate the impact of climate change, such as droughts, floods and rising sea levels.

"There are countries that would like to go make some statements on the Paris climate accord in these documents here this weekend. I don't know that that's really the appropriate place for that discussion," Andrew Wheeler, head of the U.S. Environmental Protection Agency, told reporters before the release of the communiqué.

Discussions on plastic waste were much less fraught, with the ministers in agreement that the issue needs to be quickly addressed.

Under the international framework, each country will report progress on its voluntary measures and share solutions.

Plastic waste that ends up in the oceans often ensnares or is ingested by marine animals such as dolphins and sea turtles. Microplastics measuring less than 5 millimeters can accumulate in fish, making them toxic for humans.

About 300 million tons of plastic waste is produced every year, of which 8 million tons end up in the world's oceans, according to the United Nations. Most of that waste comes from Asian countries including G-20 members China and Indonesia.

Japanese industry minister Hiroshige Seko, who co-chaired the meeting with Harada, announced on Saturday that his country will aim to require businesses to charge for disposable shopping bags by next April to help reduce waste.

Many countries in the world already charge for single-use bags or ban them outright.

The communiqué also made reference to the attacks Thursday on two tankers near the Strait of Hormuz, an incident that reignited concern over tensions in the Middle East and sent global oil prices jumping.