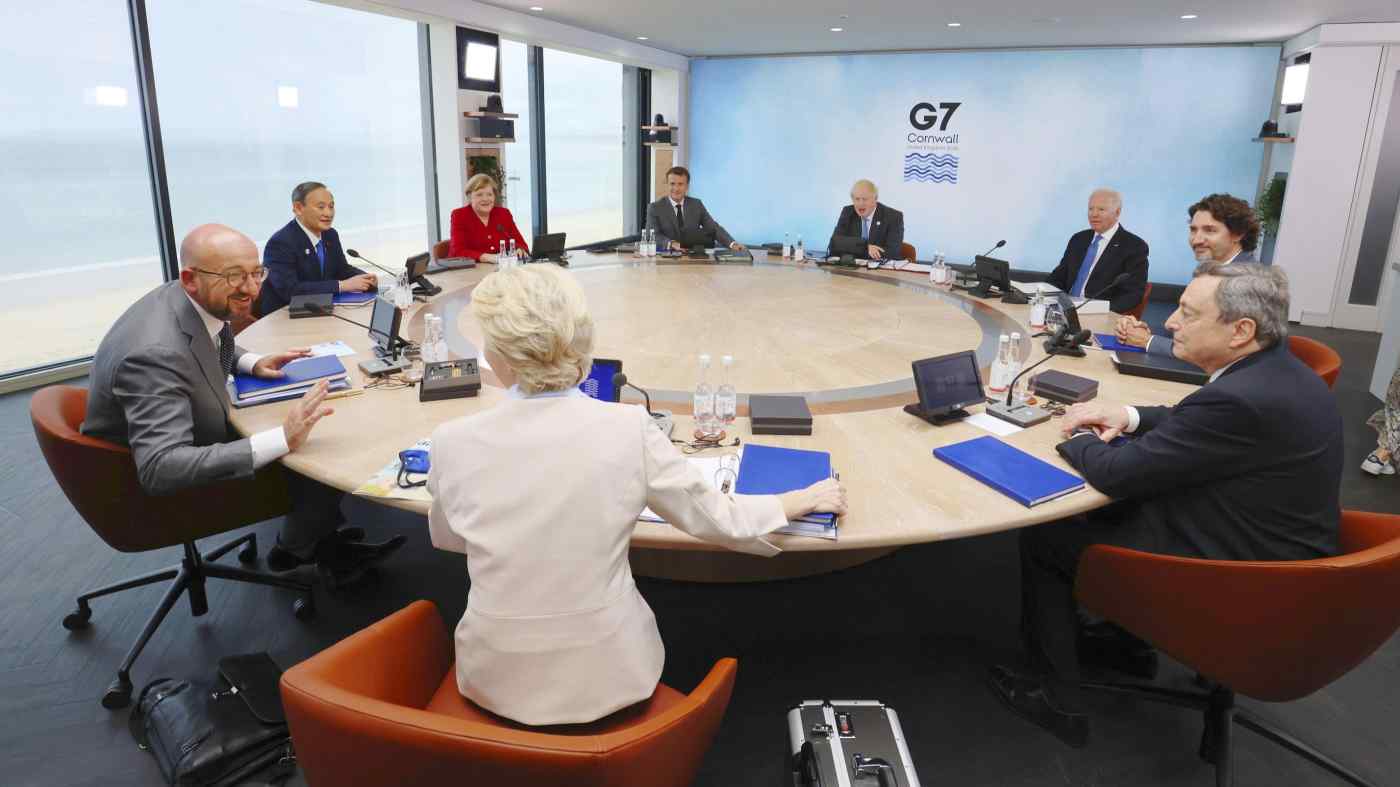 CORNWALL, U.K. -- The Group of Seven leaders agreed Saturday on a new infrastructure investment initiative that would serve to counter China's influence in developing countries through the Belt and Road initiative.

China's increasing influence in developing countries across the Indo-Pacific and Africa has concerned the group of rich democracies, and a move to launch the Build Back Better World (B3W) partnership was hinted at by U.S. and U.K. leaders before the summit.

The White House published a fact sheet detailing the new framework that had been agreed during the second day of the G-7 summit, which is hosted by the U.K. and taking place in Cornwall from Friday to Sunday.

According to the document, strategic competition with China was discussed during the session. The initiative is described as "a values-driven, high-standard, and transparent infrastructure partnership led by major democracies."

G-7 nations are keen to differentiate their initiative as a more transparent and sustainable alternative for developing countries that reflects their values and standards as democracies.

In a news briefing before the announcement, a U.S. senior administration official said, "the United States and many of our partners and friends around the world have long been skeptical about China's Belt and Road initiative," citing "a lack of transparency, poor environmental and labor standards, and a course of approach that's left many countries worse off."

"Until now, we haven't offered a positive alternative that reflects our values, our standards, and our way of doing business," the official continued. The initiative "won't just be an alternative to the BRI, but we believe will beat the BRI by offering a higher-quality choice."

The initiative aims to form "catalytic investment" from development finance institutions of the G-7, which will then mobilize private-sector funding. Climate, health and health security, digital technology, and gender equity and equality will be the initiative's focus areas.

The U.K. emphasized the partnership's environmental aims to speed up the global transition to sustainability by providing "more, better and faster" infrastructure investment for green economic growth in developing countries. "As democratic nations we have a responsibility to help developing countries reap the benefits of clean growth through a fair and transparent system. The G-7 has an unprecedented opportunity to drive a global Green Industrial Revolution, with the potential to transform the way we live," he added.

Though the U.S. has spoken about the initiative in direct relation to China, the British prime minister's spokesperson said, "This project stands on its own merits and is in line with the G-7's priorities on ensuring the world builds back better and greener from the pandemic."

The spokesperson emphasized the partnership will "provide alternative options" and give developing countries a choice for fair financing based on democratic principles.

Climate change and "building back greener" from the pandemic are key pillars of discussions this weekend. The U.K. sees the G-7 summit as an important steppingstone for environmental targets toward the U.N. COP26 Summit, which the U.K. is also hosting. The British government said that the initiative will be built on ahead of the climate summit in November.

The G-7 had lacked a unified response to China, and recent summits involving former U.S. President Donald Trump struggled to show a united front of the rich democracies. The group is keen to show its unity and ability as democratic states to provide solutions to global problems at this summit, and dealing with a more assertive China is expected to feature across discussions.

Chinese President Xi Jinping in 2013 unveiled the Belt and Road initiative, which the American Enterprise Institute says has grown to more than 140 members and projects worth tens of billions of dollars. Over 100 countries and regions are members of the China-led Asian Infrastructure Investment Bank.

The pandemic is expected to further increase the need for infrastructure and funding for it, with the U.S. citing estimates of a $40 trillion infrastructure need in the developing world.

While the B3W was hinted at by both U.K. and U.S. leaders in the lead up to the G-7 summit, aside from the U.S., the U.K. and others have so far refrained from explicitly terming the move as a measure to counter China or rival the Belt and Road initiative. States are trying to strike a difficult balance in dealing with an assertive China that is also needed as a partner in solutions to global challenges such as climate change.

The Japanese government said that several leaders made comments regarding China during the discussion. Japanese Prime Minister Yoshihide Suga expressed his grave concern on China's unilateral actions in the East and South China seas, human rights and unfair economic activities as well as other issues that do not reflect G-7 values, and called on the group to take a coordinated approach.

Further details of the initiative are expected in the joint communique of the leaders to conclude the three-day summit on Sunday.