Foreign ministers back island's participation at WHO 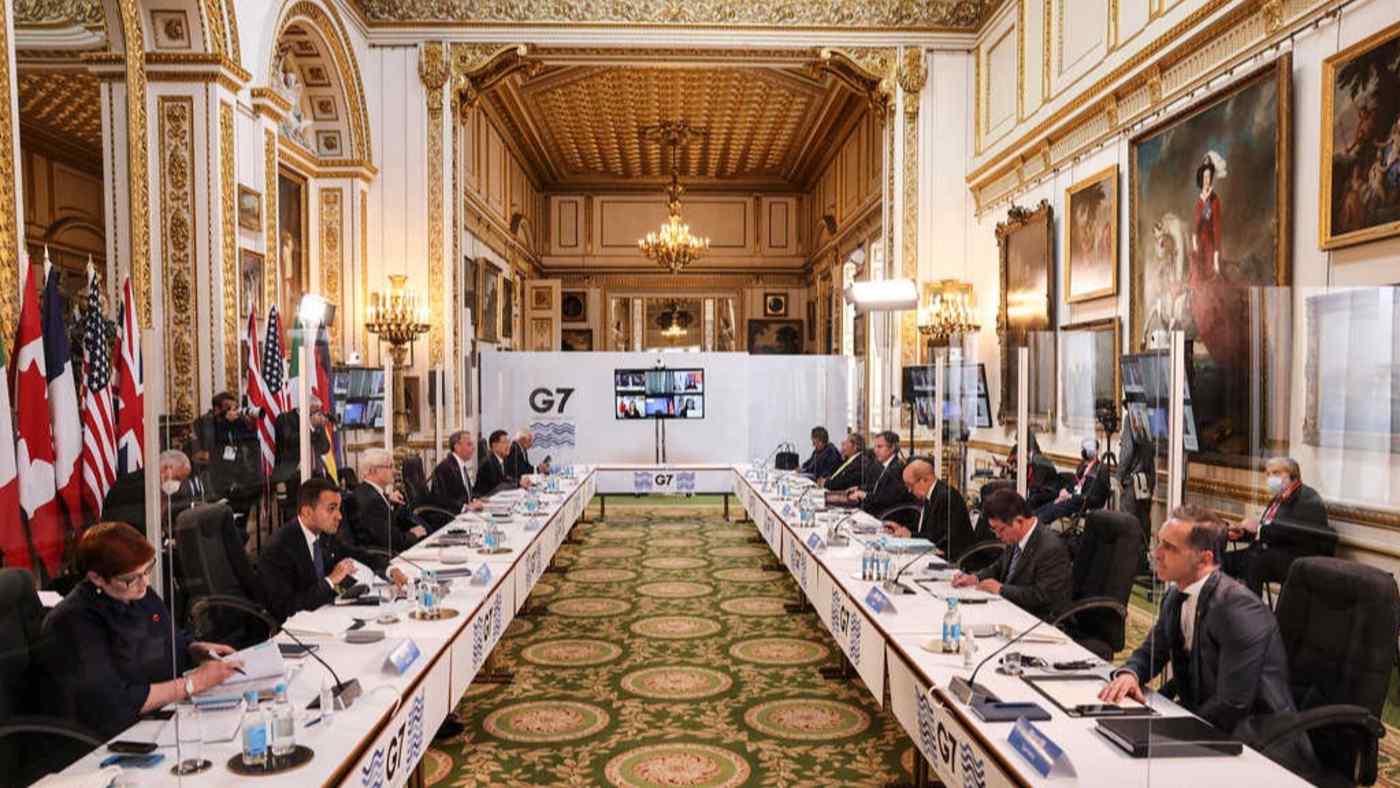 LONDON -- Top diplomats from the Group of Seven nations on Wednesday called for peace and stability in the Taiwan Strait and expressed support for Taiwan's participation in World Health Organization meetings, while also pressing China to meet its "international obligations" on human rights and freedoms.

"We encourage China, as a major power and economy with advanced technological capability, to participate constructively in the rules-based international system," the ministers said in a communique issued at the conclusion of their three-day meeting.

On the rising tensions over the Taiwan Strait, the G-7 ministers used the same phrases that U.S. President Joe Biden and Japanese Prime Minister Yoshihide Suga did in a statement after their recent summit.

"We underscore the importance of peace and stability across the Taiwan Strait, and encourage the peaceful resolution of cross-strait issues," the ministers said. Expressing "strong opposition" to unilateral action that could destabilize the area, they noted concern regarding "reports of militarization, coercion, and intimidation in the region."

China was a major theme for discussion throughout the talks and meetings on the sidelines, which marked the first face-to-face meeting of G-7 ministers since 2019 and put a heavy emphasis on shared values. The communique's remarks on Taiwan are likely to provoke a reaction from China, which regards the island's status as a nonnegotiable "core interest." The G-7 ministers' communique also condemned the military coup in Myanmar and expressed concern on the situation in the East and South China seas, while supporting the ASEAN stance on the Indo-Pacific.

In calling for Taiwan's participation in WHO forms and the World Health Assembly, the ministers said, "The international community should be able to benefit from the experience of all partners, including Taiwan's successful contribution to the tackling of the COVID-19 pandemic."

Pressing China to respect human rights and fundamental freedoms in Xinjiang and Tibet, they expressed strong support for "independent and unfettered access" for the United Nations High Commissioner for Human Rights to investigate the situation in Xinjiang.

The ministers said they "remain gravely concerned by China's decision fundamentally to erode democratic elements of the electoral system in Hong Kong." The ministers called on China and Hong Kong authorities to stop targeting those defending rights, freedoms and democratic values, specifically noting judicial cases should not be transferred to the mainland. World Health Organization headquarters in Geneva: Group of Seven ministers said the international community can learn from "Taiwan's successful contribution to the tackling of the COVID-19 pandemic."   © Reuters

Questions on China's practices extended to the economic sphere. Speaking of actions that undermine "free and fair economic systems," the G-7 ministers stated they will work together to strengthen global economic resilience. Cyber-enabled intellectual property theft was also mentioned.

At the same time, the ministers said they "look for opportunities to work with China to promote regional and global peace, security and prosperity."

The 27-page communique was agreed on by G-7 foreign and development ministers representing the U.K., U.S., Canada, France, Germany, Italy and Japan, as well as the European Union.

Australia, India, South Korea, the current chair of the ASEAN, and South Africa were invited as guests to attend parts of the meetings, reflecting host Britain's interest in deepening ties in the Indo-Pacific.

The challenges of hosting an in-person summit during a pandemic were brought to the fore when the entire Indian delegation had to isolate on Wednesday following positive cases. Subrahmanyam Jaishankar, India's external affairs minister, thereafter joined meetings virtually.

As chair of the meetings, British Foreign Secretary Dominic Raab said in a statement on guest participation: "We discussed our many shared interests, including open trade flows, regional security, and sustainable infrastructure development across the Indo-Pacific and beyond."

"It was clear that the G-7 and the guests attending the ministerial meeting shared important common ground on the need to reinforce and protect open societies and economies, and the rules, norms and values that underpin them," he added.

Over the three days of meetings, rising threats to democracy, freedoms and human rights, including China and the coup in Myanmar, as well as Russia, Iran, the violence in Ethiopia and the war in Syria were discussed.

Guest nations were involved in discussion on the Indo-Pacific during a working dinner on Tuesday evening, and also participated in discussions in Wednesday's sessions, which included recovery from the pandemic, girls' education and climate action.

In the communique, the G-7 ministers said they condemned "in the strongest terms" the military coup in Myanmar. They expressed their solidarity with advocates for democracy, and welcomed ASEAN's efforts to seek a resolution and an immediate stop to violence. Concern was also expressed for human rights and the humanitarian situation there.

Regarding the Indo-Pacific region, they supported the ASEAN Outlook policy document.

The foreign and development ministers meetings are part of a series of meetings in the lead up to the G-7 leaders summit in Cornwall, U.K., June 11-13.