ATHENS -- The worst Israeli-Palestinian violence seen in years continues to rattle the Middle East despite international calls for a de-escalation, amid warnings that the impact of this round will be felt long after the shooting stops.

Israeli Prime Minister Benjamin Netanyahu has vowed to inflict "serious setbacks" on Hamas, the group that controls the Palestinian enclave of Gaza and has launched thousands of rockets at Israel over the last week. On Sunday, Netanyahu warned that Operation Guardian of the Walls was "continuing at full strength."

"This will take time. There is pressure but we are getting serious backing, foremost from the U.S.," Netanyahu said.

The United Nations Security Council held an emergency session on Sunday, and was reportedly considering a joint statement proposed by China and others urging an immediate cease-fire. But the prospects of the U.S. signing on remained unclear -- after the Joe Biden administration apparently blocked two previous attempts at a statement -- with the conflict becoming another bone of contention in the Beijing-Washington rivalry.

"The U.S. claims to care about the human rights of Muslims," a Chinese Foreign Ministry spokesperson said last Friday, seizing an opportunity to push back against allegations of abuse against the Uyghurs of Xinjiang. "However, as the recent Israel-Palestine clashes swept a large number of Palestinian Muslims into war ... the U.S. turned a blind eye to their sufferings and even risked universal condemnation to stop the Security Council from speaking up on this."

Malaysia, a vocal defender of the Palestinian cause, on Monday issued a statement saying it was "disappointed" with the council's failure to issue a statement. "The Security Council must speak with one voice, and act swiftly and decisively to respond to the series of Israeli aggressions," it said.

U.S. officials insist they are striving for a diplomatic solution and have offered support to both sides if they seek a cease-fire. Secretary of State Antony Blinken has been talking with Middle Eastern counterparts and tweeted that the violence must end "immediately."

Repeated clashes between Palestinians and the Israeli police in East Jerusalem during the Muslim holy month of Ramadan spiraled into a hot conflict across the Gaza border last week, and intensified over the weekend. On Sunday morning, at least 42 Palestinians, including a 1-year-old baby and a 3-year-old toddler, were killed in an Israeli airstrike in Gaza City, according to the Hamas-run Gaza Health Ministry. This was the single deadliest attack since the fighting broke out.

Gaza's Jalaa Tower, which housed the Associated Press and Al-Jazeera offices, was also razed by Israel on Saturday after occupants were warned to depart. Israel said Hamas was using the building for military intelligence and weapons development.

These strikes followed a week in which Gaza was pounded by Israel from the sea, land and air, while Hamas militants fired rockets at Israeli towns. The death toll is staggering, and like in past conflicts, the numbers are higher on the Palestinian side. Flames and smoke rise during Israeli airstrikes in Gaza on May 11.   © Reuters

As of Sunday afternoon, the U.N. said 950 Israeli airstrikes on Gaza had killed 181 Palestinians, including 52 children, over the course of six days. During the same period, more than 2,900 rockets fired by Hamas and Palestinian Islamic Jihad toward Israeli cities killed 10 people, including two children. Most rockets were intercepted by the Iron Dome, Israel's air defense system.

"It is a living hell," 28-year-old Raji, a resident of Gaza City, told Nikkei Asia before the phone interview ended with screams and sounds of explosions. "It is 10 times more than the previous wars. Israel is wiping out people. People are screaming under the rubbles. They are bombing buildings in civilian neighborhoods."

For Israel, the conflict has cast a pall over its recent peace accords with the United Arab Emirates and other neighbors, which advocates hoped would usher in a new era of regional cooperation and critics said marginalized the Palestinians. Some suggested the deals signaled that the Palestinian issue was a problem of the past, but current events are proving otherwise.

The turmoil also overshadows Israel's success at rapidly vaccinating the bulk of its population against COVID-19, forcing people to "stay indoors" for a different reason. And while the Israeli army is standing firm against Hamas, some communities in the country are being torn apart from within, raising fears over basic Arab-Jewish coexistence.

In several ethnically mixed towns across Israel, intercommunal violence has pitted neighbor against neighbor, Arab citizens of Israel against Jewish ones. The fiercest of these clashes took place in the central city of Lod, where officials imposed a curfew after young Arabs burned several cars and synagogues early last week and targeted some Jewish Israelis in their homes.

An Arab Israeli man was shot and killed during the protests and riots, leading to the arrest of a Jewish suspect.

Israeli President Reuven Rivlin termed the disturbances a "pogrom" by an "incited and bloodthirsty Arab mob" but also implored people to "stop this madness. It is civil war without reason." Torah scrolls, Jewish holy scriptures, are carried at a synagogue that was torched during violent confrontations in the Israeli city of Lod, a mixed Arab-Jewish community.   © Reuters

There is fear everywhere. Older Palestinians living in East Jerusalem -- occupied by Israel in the Six Day War of 1967, and which Palestinians want for their future capital -- say they are wary of speaking out lest they put their jobs at risk. Jews in the area are being protected by armed men. Some residents ask for voluntary escorts because they feel it is too dangerous to move about.

All this has come as a shock to No'am Bar'am-Ben Yossef, senior curator of ethnography at the Israel Museum and a volunteer Hebrew teacher to Palestinian women.

"After the third [coronavirus] lockdown, I went to the Old City of Jerusalem and saw people eager to live," Bar'am-Ben Yossef said of the East Jerusalem district home to the Al Aqsa mosque and Temple Mount complex sacred to Jews and Muslims alike.

"I thought that this awful COVID-19 gave people the will to get back to a normal life, even if things are not perfect with the occupation. This war took it all away, and I am devastated."

Omer Kluglan, 47, a resident of the mixed town of Ma'ale Tzviya in north Galilea, is still shaken. "The last days were frightening. Tensions were always under the surface, and we expected something like this to happen. It never prevented me from going to the Arab villages nearby or feeling safe driving around. It is no longer the case."

By Wednesday night, young Jewish ultranationalists joined the fray and began targeting Arab passersby and Arab-owned shops in several cities. Live footage aired on TV showed Jewish men beating a presumed Arab motorist with fists and bars in the coastal city of Bat Yam. Reports also indicated that a pregnant Arab woman was seriously injured in Lod, while a group of Arabs critically injured a Jewish man in the northern city of Acre.

Analysts say the violence is likely to give the hawkish Netanyahu a much-needed political lifeline after a fourth inconclusive parliamentary election and ongoing efforts by rivals to unseat him. For everyone else, the outlook is hazier.

"This unrest inside Israel comes at a time when, for the first time in the political history of Israel, an Arab party was ready to join a government coalition. But now this possibility is over," said professor Efraim Inbar, president of the Jerusalem Institute for Strategy and Security.

Ruth Lewin-Chen, manager of the Abraham Initiatives' Shared Cities Initiative that promotes political cooperation between Arabs and Jews, observed: "In the last years, Israeli Arabs have become more and more integrated into the Israeli society. We were thrown many years back. Arabs will find it very difficult to trust the police and the local authorities again." 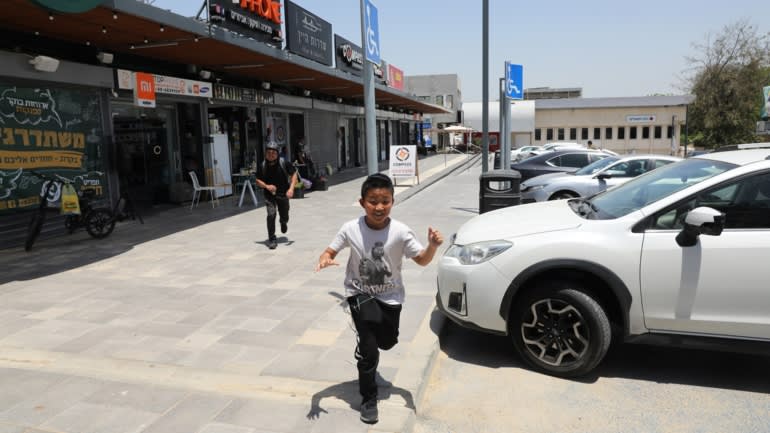 A boy runs as a siren sounds warning of an incoming rocket launched from Gaza toward Israel's Sderot on May 16.   © Reuters

Some local activists hope to encourage a renewed sense of community that transcends religious lines, noting that no one is immune to this conflict.

"We, as Palestinian citizens of Israel, hear the same air sirens and experience the same fear of the violence," said Sally Abed, 29, a member of the national leadership of Standing Together -- the largest Arab-Jewish grassroots organization in Israel.

She was speaking from Jaffa, a mixed Arab-Jewish town near Tel Aviv. Hundreds of people protested there on Saturday over a firebomb attack that severely wounded a 12-year-old Arab boy the previous night. "I am really scared, and I do not speak Arabic when I am out," Abed said. "We do not feel protected from the Israeli police, even though we are citizens of Israel."

An online petition started on Saturday morning calls for people to volunteer to help those afraid to go out of their houses in many mixed towns.

"Air raid sirens will be forgotten, underlined Dr. Gabriel Haritos, research fellow at the Azrieli Center for Israel Studies at the Ben Gurion Research Institute - Ben Gurion University of the Negev. "But the ethnic clashes between Israeli Jews and Arab Israelis on the streets of the mixed towns in Israel will not."