Prime minister feels the disenchantment at home and anger from abroad

BANGKOK -- Cambodia's strongman took extremely prompt action after a building under construction in the coastal city of Sihanoukville collapsed and killed 28 workers in the wee hours of June 22.

Upon returning to his country from an ASEAN summit in Thailand, Prime Minister Hun Sen immediately journeyed to the site where the seven-story building collapsed. The dead had been sleeping inside.

Following the tragedy, word began to circulate that slipshod work by a Chinese company was to blame. Hun Sen ordered that two Chinese nationals be detained. He also replaced the governor of Preah Sihanoukville Province and a top disaster management official, citing negligence.

Hun Sen said he will offer consolation payments of $60,000 to each victim's family, adding that $10,000 of the sum would come from his personal bank account.

Political leaders often visit disaster-hit areas to stand by those affected. This takes place around the world. But making the pilgrimage to the southern city was crucial to Hun Sen as Sihanoukville has come to symbolize the "colony of China" ridicule that Cambodia often comes in for these days.

The coastal resort town has gone through a drastic transformation since Chinese companies began developing a special economic zone there in 2008. Some 130 Chinese companies have entered the city, bringing workers from home with them. Sihanoukville, with an original population of 100,000, is now said to have the same number of Chinese residents, many of whom are illegal immigrants.

Speculation is rife that a Chinese military base is planned for the area.

While Sihanoukville is an extreme case, it is not the only place in Cambodia that is looking more like China. In Phnom Penh, many construction sites for high-rise buildings hoist Chinese signboards.

Chinese capital has undoubtedly underpinned Cambodia's high economic growth, which has hovered around 7% for years now. In 2017, foreign direct investment in Cambodia totaled $2.1 billion, with China accounting for 70%.

But Cambodians are increasingly complaining about Chinese workers' highhanded behavior, and anti-Chinese sentiment is growing as property prices soar and public safety subsides.

Amid the grumbling, Hun Sen repeatedly feels the need to stress that Cambodia will not give up its sovereignty in exchange for economic assistance. His quick reaction to the collapse also appeared to be designed to still the anti-China Zeitgeist.

In the 1970s, Prime Minister Pol Pot, influenced by Mao Zedong's ideology, massacred an estimated 2 million Cambodians as he sought to achieve an agrarian socialist society. China supported him behind the scenes.

Hun Sen ousted Pol Pot in cooperation with the Vietnamese army and took his current post in 1985. After a 1991 peace treaty ended internal fighting, Hun Sen began to lead the country's reconstruction with support from the U.S. and Japan.

At the time, he kept China at a distance.

That changed a decade ago. In July 2009, Uighurs staged large-scale riots in China's Xinjiang Uighur Autonomous Region. Five months later, about 20 Uighurs illegally entered Cambodia to escape a Chinese government crackdown and applied for asylum at the Phnom Penh office of the U.N. High Commissioner for Refugees.

Xi Jinping, then vice premier, visited Cambodia two weeks later with an offer of $1.2 billion in economic assistance. The day before Xi's arrival, the Cambodian government deported the Uighurs back to China.

The Cambodian government's pro-China stance has been glaring for years now. In 2012, when Cambodia assumed the chairmanship of the Association of Southeast Asian Nations for the first time, it sided against the Philippines and other ASEAN member states that wanted to mention their South China Sea disputes with China in a joint statement.

As a result, ASEAN failed to issue a joint statement after a foreign ministerial conference for the first time since its birth in 1967.

Last month during deliberations on the ASEAN Outlook on the Indo-Pacific-Pacific concept, which ASEAN leaders adopted at their summit in Bangkok, Cambodia called for removing "maritime" from areas of cooperation, according to ASEAN sources. Although maritime cooperation remained in the text, Cambodia again acted as China's spokesperson, a habit that has come to annoy other member states, one of the sources said.

China and Cambodia have been on a prolonged honeymoon, and adverse effects are evident. In Cambodia's general election last July, Hun Sen's ruling Cambodian People's Party won all seats in the lower house of parliament. The result was not a surprise. The largest opposition party, which had been gaining momentum in recent elections, had been dissolved. China, right after the election, showed its support for the ruling party.

Now the European Union, having noticed Cambodia's retreat from democratization and its disregard for human rights, is considering suspending tariff breaks on Cambodian products. 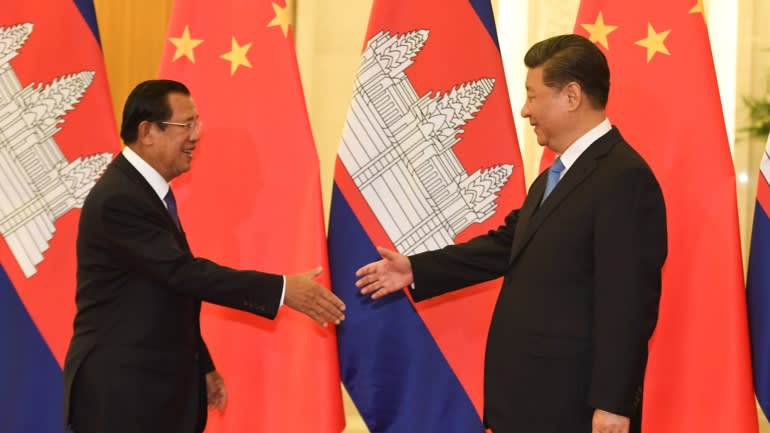 The prolonged honeymoon between Hun Sen and Xi Jinping is taking a toll on Cambodian democracy.   © Reuters

Hun Sen's government is literally beset by troubles from within and without, from Cambodians' disenchantment with their Chinese interlopers to the international community's criticism.

But given its reliance on economic assistance and investment from abroad, Cambodia cannot turn its back on China. The Cambodian government said in a statement regarding its foreign policy, announced on May 21, that it supports China's Belt and Road Initiative but also the "Free and Open Indo-Pacific," led by Japan and the U.S.

The statement was released after Hun Sen attended an international conference in Beijing and before he visited Japan for talks with Prime Minister Shinzo Abe. "Instead of criticizing China," a diplomatic source said, Cambodia "is trying to strengthen its relations with other countries and correct its diplomatic balance."

Cambodia in 2020 will host the biennial summit of the Asia-Europe Meeting, which encompasses 53 countries and organizations. Two years later, it takes its second turn as ASEAN chair. Another general election will follow in 2023.

While economic and social issues have always been focal points in Cambodian elections, foreign policy will take center stage in 2023, a Cambodian journalist said.

If this turns out to be the case, which side Cambodia takes at international conferences and other occasions in the next four years will offer clues as to Hun Sen's future policies.

The prime minister turns 67 next month. He has been in power for 34 years and during last summer's elections said he intends to remain in office for 10 more years.

Despite the bluster, he is walking a tightrope.