Demonstrators in Budapest protest against the construction of a planned campus of Shanghai-based Fudan University. The placard on the left reads, "We will not become a colony!"   © AP
RINTARO HOSOKAWA, Nikkei staff writerJune 19, 2021 16:31 JST | Europe
CopyCopied

VIENNA -- Plans for a Chinese university to build a satellite campus on donated riverfront land in Budapest have sparked protests and threaten to derail Prime Minister Viktor Orban's pro-Beijing agenda in a country that has maintained strong ties with China.

Hungary's parliament on Tuesday approved the donation of the state-owned land in the capital, where Shanghai-based Fudan University plans to build a new campus. The location is due to open by 2024.

The planned campus is opposed by roughly 70% of the Hungarian public, according to recent polling. A demonstration at the proposed site this month drew about 10,000 participants.

"We will not become a colony!" one cardboard sign read.

The detractors say the country's high-quality education system will suffer under the growing influence of the Chinese Communist Party. Prior to the demonstration, Budapest Mayor Gergely Karacsony renamed streets near the planned campus "Free Hong Kong Road" and "Uyghur Martyrs' Road."

Construction of the project will cost 1.5 billion euros ($1.79 billion), according to Agence France-Presse. Chinese financing will cover 1.3 billion euros.

This "will leave even our grandchildren indebted," Karacsony, an opposition politician and potential challenger to Orban, told Nikkei. "The Hungarian government preferring Chinese interests over Hungarian interests is absolutely unacceptable."

The row comes as ties between several European countries and China have begun to fray. This year, Beijing and Brussels engaged in a series of tit-for-tat sanctions over alleged human rights abuses against the Muslim Uyghur population in China's northwest Xinjiang region. Beijing is likely keen to keep its strong relationship with Hungary, the only EU country to use Chinese coronavirus vaccines.

The new campus, on the banks of the Danube River, will occupy 520,000 sq. meters. Fudan University would be the first Chinese institute of higher learning to build a campus in the EU. 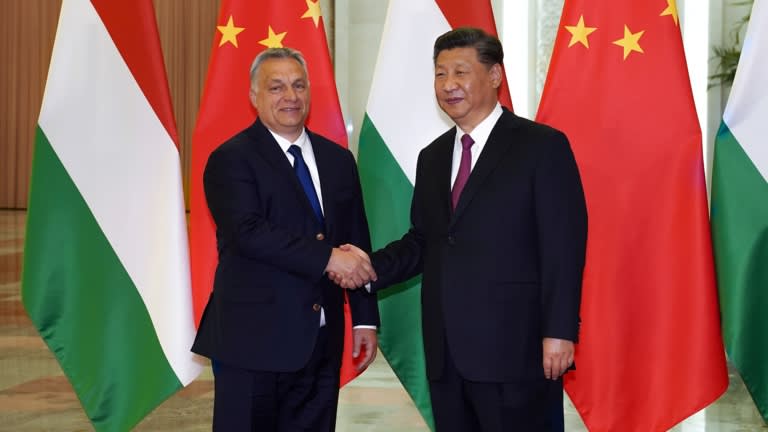 The controversy over the campus has been damaging to Orban's right-wing ruling party, Fidesz, ahead of next year's general elections. An opinion poll shows support for Fidesz wallowing at 48% as of June 9, while the opposition coalition is virtually neck-and-neck at 47%.

Orban has struck back by accusing opponents of playing politics. According to this year's QS World University Ranking, published by Quacquarelli Symonds, which specializes in international education, Fudan places 34th, while the leading Hungarian university falls short of 500th place. The government argues that the campus project could lead to research and development centers and new investment.

Orban said he plans to conduct a referendum on the campus project so that he can secure a mandate, but the time frame for the vote has yet to be set.

The Hungarian prime minister is a cause of concern in the EU due to his government's suppression of press freedom and meddling in judicial processes. In 2017, Hungary passed a law that forced Central European University, an institution founded by the billionaire hedge fund manager George Soros, to relocate out of Hungary.

Soros, a Holocaust survivor born to a Jewish family in Hungary, has donated much of his wealth to humanitarian causes. But Orban's government has regarded him as a foe.

Even though EU nations are becoming increasingly antagonistic toward China, Hungary's pro-Beijing stance has not wavered.

Under China's Belt and Road initiative, Hungary received support to refurbish a 350 km railway linking Budapest with the Serbian capital of Belgrade. A massive solar power park backed by a Chinese company was completed in May.

China agreed to provide $5.5 billion in investment and contracts over the last decade through 2020, according to figures from the American Enterprise Institute think tank. Concerns are strong that Hungary may fall into a "debt trap," opening the nation to pressure from Beijing on both the domestic and foreign policy fronts.

"Regarding that specific [Belt and Road] agreement, we will assess it carefully," Draghi said.