In row with China, Canada wrestles own legacy of Indigenous abuse OTTAWA -- The discovery of hundreds of unmarked graves of Indigenous children at defunct "residential schools" has provoked widespread remorse in Canada -- and complicated the country's already tense relationship with China.

China last week seized on the disturbing revelations to undermine a Canadian-led effort by 44 countries to hold Beijing accountable for alleged human rights abuses in Xinjiang, Hong Kong and Tibet. In a pre-emptive statement to the United Nations Human Rights Council, China cited the children's graves in accusing Canada of "crimes" against its Indigenous people.

Within Canada, more than a dozen outraged and mournful communities have canceled celebrations of Canada Day -- the country's national day -- this Thursday. But experts warn Beijing is likely to continue to use Canada's historical abuse and neglect of First Nations peoples to its advantage.

"They'll be throwing that in our face now for years," Canadian China expert Margaret McCuaig-Johnston of the University of Ottawa said in an interview.

The row comes at a sensitive time. Bilateral ties have worsened since the December 2018 arrest of Huawei executive Meng Wanzhou on a warrant for extradition to the U.S. to face fraud allegations. A two-day hearing on admitting new evidence for her extradition challenge is expected to end Wednesday, as the process nears what should be the final stretch in August.

Meng remains under house arrest in Vancouver. Meanwhile, the fate of Canada's "two Michaels" -- former diplomat Michael Kovrig and businessman Michael Spavor -- remains up in the air. Both were arrested soon after Meng and remain imprisoned in China, following secret trials on espionage charges. 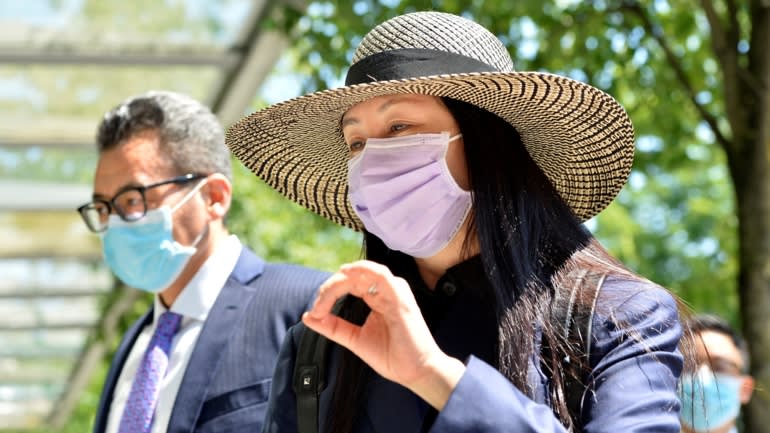 Until recently, McCuaig-Johnston said, the Canadian government had generally been cautious toward China, "trying to avoid making things worse for the two Michaels."

But Canadian public opinion has turned drastically against China. And Prime Minister Justin Trudeau -- apparently emboldened by U.S. President Joe Biden's firm approach to Beijing, McCuaig-Johnston suggested -- may be positioning himself with sharper rhetoric for a potential Canadian election campaign.

Canada's statement to the U.N. council called for immediate, meaningful and unfettered access to Xinjiang for independent observers, including the U.N. High Commissioner for Human Rights.

Canada's own harrowing Indigenous controversy, though, is not easily set aside.

About 150,000 Indigenous children were forcibly taken from their families and sent to residential schools. Set up by the government in the late 1800s but mostly run by Catholic Church religious orders, the schools were explicitly intended to destroy native cultures and assimilate the population. The last such school closed in the late 1990s.

Today, investigators use sophisticated ground-penetrating radar to search the yards of the shuttered schools. Murray Sinclair, former head of the Truth and Reconciliation Commission established to shed light on schools' dark legacy, says there may be as many as 10,000 graves.

The radar machines are carefully calibrated to measure the age of the buried bodies; many are believed to have died from disease and malnourishment, along with accidents or by suicide.

China's statement to the U.N. followed the detection of 215 unmarked graves in Kamloops, in the western province of British Columbia.

"We are deeply concerned about the serious human rights violations against the Indigenous people in Canada," Jiang Duan, a senior official at China's mission to the U.N. in Geneva, was quoted as saying on June 22. "Historically, Canada robbed the Indigenous people of the land, killed them and eradicated their culture. We call for a thorough and impartial investigation into all cases where crimes were committed against Indigenous people, especially the children."

Trudeau responded to China's missive by saying that, unlike China, Canada had admitted wrongdoing. "Where is China's Truth and Reconciliation Commission?" he asked.

But China is not alone in taking Canada to task.

A group of Canadian lawyers has asked the chief prosecutor at the International Criminal Court in The Hague to investigate the Canadian government and the Vatican for "crimes against humanity." A Canadian First Nations elder speaks at a vigil for children who died at Canada's residential schools, set up in the late 1800s to assimilate the Indigenous population.   © Reuters

"The truth we are seeing unfold about the death of children torn from their families to attend a school where they were stripped of their culture, dehumanized, starved, and subjected to horrific abuse fulfills the internationally recognized definition of genocide," Stephanie Scott, executive director of the National Centre for Truth and Reconciliation, said in a statement issued last Thursday.

"For years, Indigenous communities were traumatized with not knowing where loved ones were; many survivors shared memories from their childhood of seeing fellow classmates die or being forced to dig graves for their fellow students."

Since the exchanges at the U.N., another 751 unmarked graves were found in a school yard in the central province of Saskatchewan.

While the revelations have clearly tarnished Canada's global image and made navigating the China tensions more difficult, it is not clear how far Trudeau is willing to push Beijing in the first place.

China expert Charles Burton of the Macdonald-Laurier Institute, a Canadian think tank, noted that the Trudeau government abstained from a parliament vote on an opposition motion declaring China's treatment of its minority Muslim Uyghur population to be genocide.

Burton said Trudeau's statements on China have been attached to multilateral activities. "He's not actually prepared to take any unilateral meaningful action," he said. 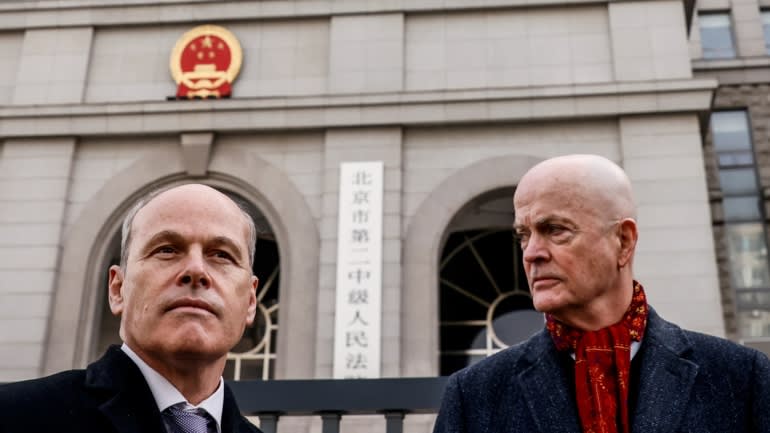 From left, Jim Nickel, charge d'affaires of the Canadian Embassy in Beijing, and William Klein, acting deputy chief of mission at the U.S. Embassy, stand outside the Beijing No. 2 Intermediate People's Court, where Michael Kovrig is believed to have been tried for espionage behind closed doors in March.   © Reuters

Burton recommends much stronger moves: Canadian sanctions against Chinese officials, implementation of a foreign influence transparency law, and the creation of a special police unit to help Chinese individuals and their families in Canada, such as Hong Kong pro-democracy activists, who are "menaced and harassed" by Beijing.

On the other hand, Carlo Dade, an expert on Canadian trade with China at the Canada West Foundation, called attention to Beijing's heavy punishment of Australia for calling for an independent investigation into the origins of COVID-19.

China has hit Australia with steep tariffs on a host of products, from wine to barley and more. Their relations continue to sharply deteriorate.

Canada is one of the countries that has gained some of the market opportunities lost to Australia. The foundation noted a 38% increase in Canadian farm, fish and food product exports to China last year. Despite some trade penalties against Canada during the "hostage diplomacy" dispute around the Michaels, overall Canadian exports to China rose to $25.2 billion in 2020 -- up 7.5% from 2019.

"China hasn't come after Canada yet," Dade said. "Is Canada next? It's a very legitimate question."