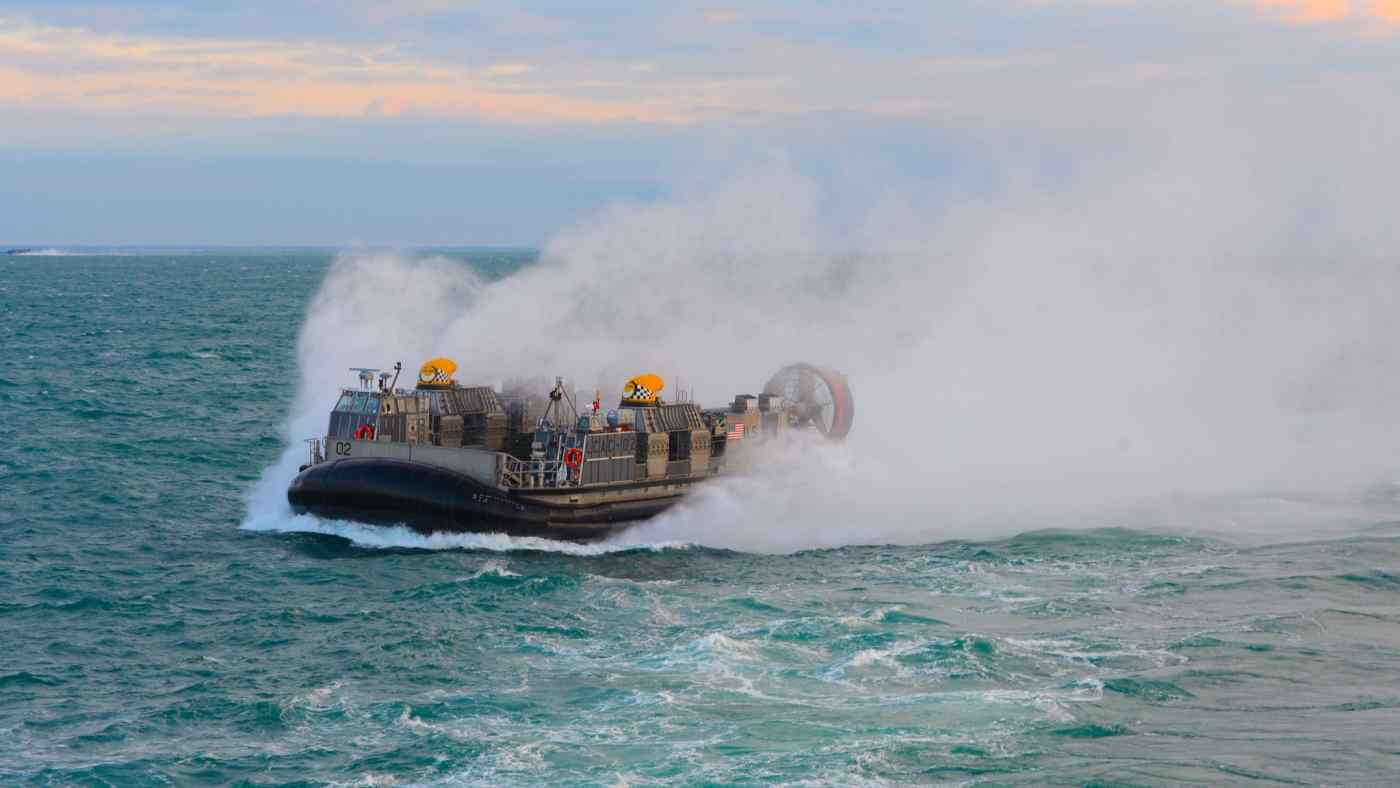 WASHINGTON/MANILA -- U.S. Defense Secretary Lloyd Austin's tour of Southeast Asia marked a step toward rebuilding alliances and regaining trust that had been declining in recent years, a prime task as China's regional influence continues to grow.

"At the top of my agenda was finding ways to enhance and reinvigorate our alliance," Austin said in a joint news conference with Philippine counterpart Delfin Lorenzana in Manila on Friday.

With the show of commitment by the first high-profile member of U.S. President Joe Biden's cabinet to visit the region, the administration hopes to gain more strategic flexibility as the Pentagon's security focus shifts to China.

The visit was intended to reassure such partners as the Philippines and Vietnam, which want to be sure that Washington has their back over the long term in their maritime claims in the South China Sea.

Also on Friday, the White House announced that Vice President Kamala Harris is set to visit Singapore and Vietnam next month to "strengthen relationships and expand economic cooperation with two critical Indo-Pacific partners of the United States."

The biggest win from Austin's trip was to ensure the full continuation of the Visiting Forces Agreement, which provides the legal foundation for the U.S. military presence in the Philippines. President Rodrigo Duterte moved in February 2020 to scrap the deal but repeatedly postponed a final decision, and Austin likely encouraged him to keep it in place when the two met Thursday.

This could give Washington more options for its China strategy. The Pentagon is changing tack from its post-Cold War approach of keeping its Indo-Pacific forces concentrated in a handful of locations, instead spreading them out to limit the potential damage from a Chinese precision missile strike.

Gregory Poling, senior fellow for Southeast Asia at the Center for Strategic and International Studies, sees the Philippines as a promising location for American forces: The country is a U.S. ally, faces the South China Sea and is situated near the Taiwan Strait.

With the VFA now more firmly in place, attention will turn to other forms of cooperation, such as materiel storage and expanded access to military bases. 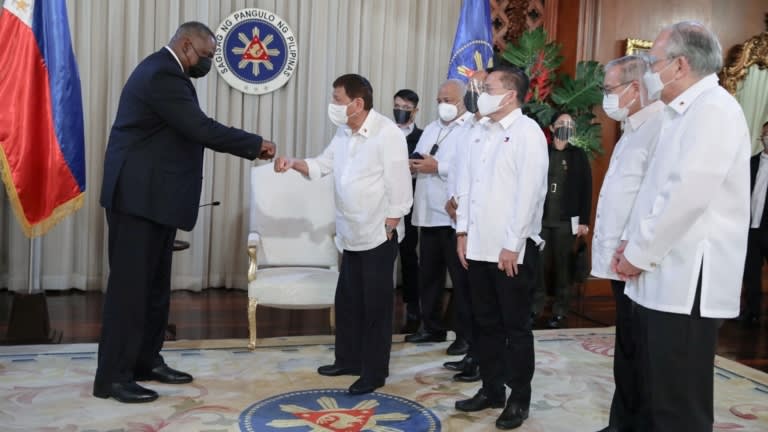 The global force posture review that the Biden administration aims to complete this fall is expected to set out a change in focus from the Middle East to China. The Pentagon is reducing its anti-missile batteries in the Middle East and some could be deployed in the Indo-Pacific.

The deployment of the U.S. Navy's 11 aircraft carriers reflects the strategic shift. These ships spent 197 days in the Pacific this year as of July 6, making up more than half the total, according to the U.S. Naval Institute.

The administration is stepping up funding for its Asian pivot. It requested $5.1 billion for the new Pacific Deterrence Initiative for fiscal 2022, more than for its European counterpart, though the Congress expressed deep concern that the request to the new Initiative did not meet the priorities laid out by the Indo-Pacific Command.

None of this means that Southeast Asian countries are embracing the U.S. with open arms. Just before Austin paid a courtesy call to Duterte on Thursday, the Philippine leader attended the opening ceremony for a China-funded bridge in Metro Manila.

And in his final State of the Nation address, the president showed clear skepticism about Washington's commitment. "They say that if the attack is against the Philippines, they will defend," he said. "But they issued a statement that America does not meddle in conflicts involving the boundaries of other nations."

This might refer to the 2012 standoff between China and the Philippines over the Scarborough Shoal in the South China Sea. The U.S. mediated between the two sides, which reportedly agreed to pull out from the shoal at the same time. But Beijing's ships never really left, and it in effect took control of the shoal.

Duterte has complained repeatedly that there is little point to the alliance with the U.S. if it cannot protect the Philippines' sovereignty.

Manila is frustrated that the pledge to defend the Philippines in the South China Sea extends only to government assets and not to private fishing vessels, argues senior defense analyst Derek Grossman of RAND Corp. "This brings up a really uncomfortable thing because if Filipino fishing boats are sunk, the Mutual Defense Treaty is not triggered. I don't think people like Duterte appreciate that," he said.

"We have to be realistic" that China's militarization of the South China Sea is "not getting rolled back," said Eric Sayers, a nonresident fellow at the American Enterprise Institute. The time to prevent that "would have been 2015, but the Obama administration sort of watched and did little," added Sayers, who focuses on Asia-Pacific defense policy and strategy and U.S.-China technology policy. 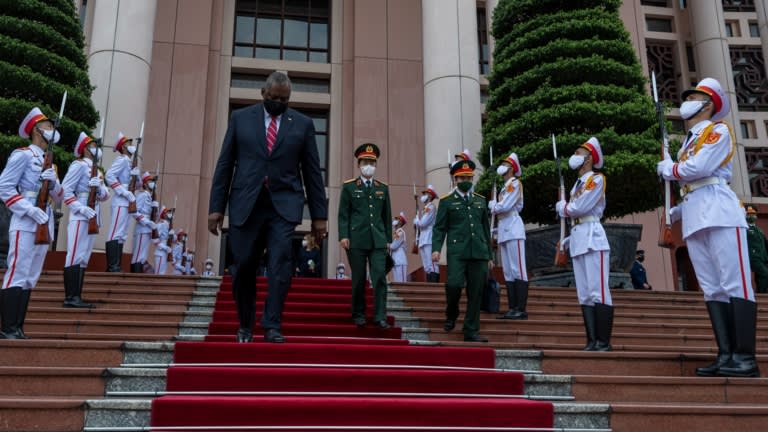 Austin visited Hanoi during the trip. Vietnam has avoided taking sides in tensions between the U.S. and China. (Photo courtesy of the U.S. Defense Department)

"I think the best strategy, in addition to the U.S. remaining present, is to ensure that those other claimant states feel that they have the capacity so that, therefore, they can have the will to also remain present against the Chinese," he said.

Vietnam, meanwhile, has steadfastly avoided taking sides between the U.S. and China. While trust in Beijing is eroding, China remains one of Vietnam's biggest trading partners.

"I think the key is for the Philippines and Vietnam and others to feel like they have the capability and capacity to pursue an independent foreign policy, that doesn't have to be subject to the will of Beijing," Sayers said.