China calls US-Japan arrangement a 'product of the Cold War' Article 5 of the Japan-U.S. Security Treaty stipulates that the U.S. is obliged to defend Japan should its territories come under attack.   © Kyodo
YUKIO TAJIMA, Nikkei staff writerNovember 12, 2020 11:39 JSTUpdated on November 13, 2020 01:26 JST | Japan
CopyCopied

TOKYO -- U.S. President-elect Joe Biden sought to shore up ties with key Asian allies on Thursday morning, by making his first calls with the leaders of Japan, South Korea and Australia.

In Biden's 15-minute conversation with Japanese Prime Minister Yoshihide Suga, the two leaders agreed to cooperate on fighting the coronavirus and climate change. Suga said the Japan-U.S. alliance, while needing strengthening, is the cornerstone of his country's diplomacy and security, stressing that it is essential for the peace and prosperity of an increasingly unstable region.

Biden confirmed that Article 5 of the Japan-U.S. Security Treaty will be applied to the defense of Okinawa Prefecture and the Senkaku Islands. Article 5 stipulates that the U.S. is obliged to defend Japan should its territories come under attack. Former President Barack Obama was the first U.S. leader to declare that the pact applies to the Senkakus.

Chinese vessels have been sighted near the islands, claimed by Beijing and known as Diaoyu in China, on more than 280 days this year -- moves that have ratcheted up pressure on Japan and drawn protests from Tokyo.

Japanese government officials welcomed the focus on the alliance, the Senkakus and the Indo-Pacific in this first post-election call as a signal to the rest of the world that the Biden administration will not ease up on China.

The significance of this point was made clear by Beijing's response. The islands "are China's inherent territory," Chinese Foreign Ministry spokesperson Wang Wenbin told reporters Thursday, adding that the U.S.-Japan security treaty, "as a product of the Cold War, should not undermine the interests of any third party, still less jeopardize regional peace and stability."

This represented the first comment by the ministry on remarks from Biden since the election -- and a rare example of a critical initial response to a newly elected leader. 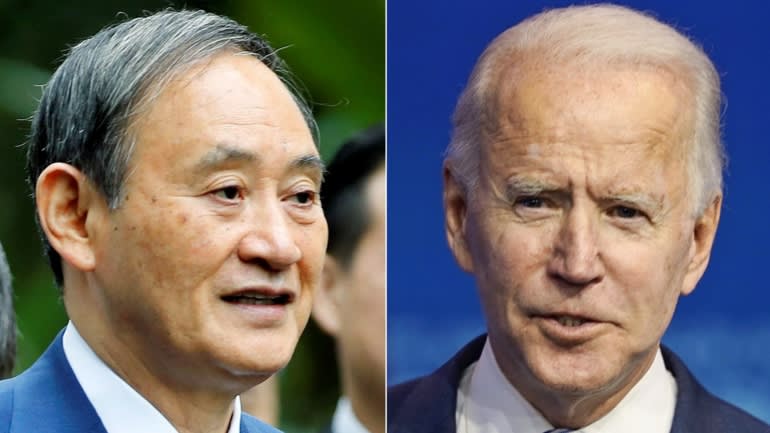 Suga said he looked forward to "meeting [Biden] as soon as possible," in reference to a planned February 2021 visit to the U.S. after the presidential inauguration ceremony.

The Japanese prime minister called for cooperation toward realizing a "free and open Indo-Pacific" led by Japan and the U.S., an idea for which Biden expressed support. He also requested cooperation on the issue of North Korean abductions of Japanese citizens.

After the call, Suga told reporters "it was very important to work with Biden to strengthen the Japan-U.S. alliance."

The early assurance is a departure from President Donald Trump, who was seeking a review of the alliance during the presidential campaign four years ago. He reaffirmed that the treaty covers the Senkakus to former Prime Minister Shinzo Abe only after the election, at their first summit in February 2017.

While Trump has been known to make sudden about-faces on policy, Biden, a more traditional politician, is seen as unlikely to go back on a clearly stated security policy position.

Also separating the pair from Trump are their commitments to tackling climate change. Suga has set a goal of reducing carbon emissions to net zero by 2050, and Biden has pledged to return the U.S. to the Paris Agreement.

On the COVID-19 response, Biden has called on a team of experts to develop an action plan to be implemented at the same time as the inauguration of his administration, while Suga plans to align with the U.S. in the development and securement of vaccines.

The two sides committed to keep on coordinating views on China's advances in the South China Sea and the East China Sea, as well as North Korea's nuclear and missile development. Japan will pay close attention to how Biden approaches China in the face of the ongoing Washington-Beijing tensions. U.S. Navy seamen attach a cargo pendant on an MH-60R Sea Hawk helicopter on the guided-missile cruiser USS Shiloh in the East China Sea on Nov. 10. (Photo courtesy of the U.S. Navy)

Meanwhile, South Korean President Moon Jae-in also had a call with Biden on Thursday morning, in which the pair agreed on the need for a strong alliance and keeping peace on the Korean Peninsula.

"I just spoke to @JoeBiden and congratulated him on his election. We reaffirmed our firm commitment to a robust ROK-US alliance and peaceful and prosperous Korean Peninsula. Going forward, I will work closely with him to meet global challenges including COVID-19 and climate change," Moon said on Twitter.

But with Biden calling North Korean leader Kim Jong Un a "thug," analysts say Moon may face difficulties pushing for engagement with Pyongyang. Some see the North resuming military provocations to raise its negotiation power with the incoming Biden administration.

"The U.S. and its allies need to coordinate responses to North Korea's upgraded long-range and submarine-based missiles because Pyongyang's next move may be to conduct a provocative test as a 'welcome gift' to Biden before demanding financial benefits to reduce military tensions," said Leif-Eric Easley, an associate professor of international studies at Ewha Womans University in Seoul.

"A Biden administration is more likely to pursue working-level talks with Pyongyang rather than summits and big deals."

"There are no greater friends and no greater allies than Australia and the U.S.," Morrison tweeted after the call. "I look forward to strengthening even further our deep and enduring alliance, and to working with him closely as we face the world's many challenges together."