The former four-star general was easily granted a waiver by both houses of Congress from the seven-year "cooling-off period" needed before a retired service member can return to lead the Pentagon.

While there had been initial opposition toward Austin becoming defense chief so soon after retiring in 2016, the deadly insurrection at the Capitol on Jan. 6 made it difficult for lawmakers to block the confirmation.

After the House voted 326-78 to approve the exemption on Thursday, the Senate quickly followed with a 69-27 approval. The back-to-back votes put Austin in position to be confirmed as secretary by the full Senate on Friday.

"Globally I understand that Asia must be the focus of our effort, and I see China in particular as a pacing challenge for the department," Austin told senators.

Responding to Republican Sen. Dan Sullivan's question on not having had experience in the Asia-Pacific -- the former four-star general spent a large portion of his career in Iraq, Afghanistan and the United States Central Command with forward headquarters in Qatar -- Austin said that was because "the Middle East, for quite some time, was ... the most important thing for our country."

"But if confirmed, you can expect that ... I'll put a laser-like focus on developing the right capabilities, plans, operational concepts, that'll ensure that we maintain a competitive edge," with respect to China, he promised. 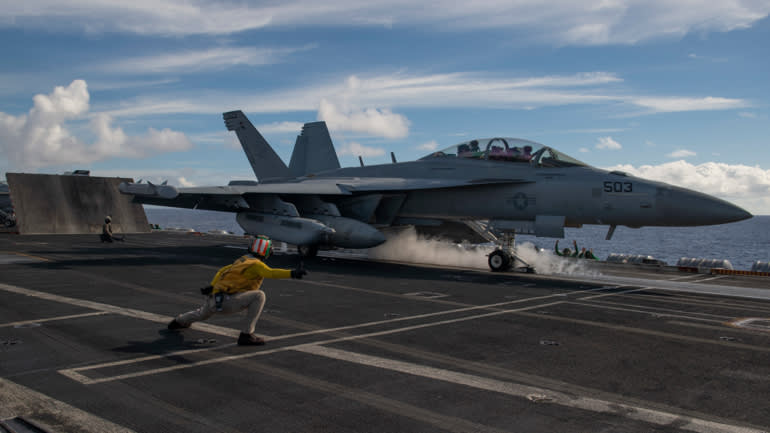 "I fully recognize that while I have the military component of this problem set, it's a whole-of-government approach because China looks to compete with us along a spectrum of activities," he said.

Austin's nomination heads to the full Senate for confirmation. Both houses of Congress on Thursday granted a waiver from a law that required him to wait seven years after active duty service before taking the top civilian post at the Pentagon. Austin retired in 2016.

The West Point graduate was the head of U.S. forces in Iraq and has led troops at almost every level.

Democratic Party leaders want to confirm cabinet members and other key officials quickly, after Biden was sworn into office on Wednesday.

Senators from both the Democratic and Republican parties brought their national security concerns to Austin. They cited China, working with allies and American defense technology.

"They're already a regional hegemon and I think their goal is to be a dominant world power," Austin said of China.

"And they are working across the spectrum to compete with us in a number of areas, and it will take a whole-of-government approach to push back on their efforts in a credible way," he said. "Not to say that we won't see things down the road that are in our best interest [to] cooperate with China on.

When asked how Austin would respond to China's efforts to develop a military that matches or surpasses that of the U.S., he said that he "would intend to make sure that never happens."

Taiwan also was mentioned during the confirmation hearing, as senators asked whether Austin would be ready to support the self-governed island if Beijing decided to take it by force.

"Our efforts will be to ensure that we do everything to make sure that China doesn't take that decision," Austin said. "But our support to Taiwan has been rock solid over the years and has been [of] bipartisan support. We've been strong in our commitments, and certainly I'll make sure that we're living up to our commitments to support Taiwan's ability to defend itself."

Restoring relationships with U.S. allies is a focus of the Biden administration. Having worked with allies in Iraq and Afghanistan, Austin said he thinks the military performs better when working as a part of a team.

"I truly believe that you can't just show up and fight and be effective," he said. "I think that these relationships have to be developed. You have to train, work and live together in order to have an effective, incredible fighting force.

"I think that fighting as a part of a coalition is absolutely a part of who we are, something that we treasure. I'll look forward to re-establishing some of the critical partnerships and alliances that we've had, and working with our allies to make sure that we keep them on board as we move forward fast."

Sen. Jack Reed, a Rhode Island Democrat, said the uncontested technological advantage held by the U.S. during the 1970s and 1980s has faded, with some suggesting that the country "may not be ahead in many places."

Austin said much work is needed to transform the Department of Defense.

"Our acquisition system needs to be more agile and more responsive," he said. "We need to develop the operational concepts that support those new capabilities to make sure that we continue to present a credible deterrent."