TOKYO -- When U.S. President Joe Biden sat across from Qatar's ruling emir, Tamim bin Hamad Al Thani, in the Oval Office on Jan. 31, it was a punch in the gut for Japanese government officials.

This pain came not only from the realization that the American leader had welcomed the emir, while not extending such an invitation to new Japanese Prime Minister Fumio Kishida. Tokyo has also found that its recent cooling of ties with Qatar could not have come at a worse time.

JERA, Japan's top energy buyer, had just decided not to extend a 25-year contract with Doha for liquefied natural gas. That choice, albeit a private-sector business decision, suddenly looked like the wrong geopolitical call.

Since Kishida became prime minister in October, the Foreign Ministry and the Japanese Embassy in Washington have been scrambling to secure an early White House visit, as is custom for new Japanese leaders.

Unable to lock in a visit during January, Kishida settled for a virtual meeting on Jan. 21. The American president was overwhelmed with domestic priorities, Tokyo was told.

Just 10 days later, Biden shook hands with the Qatari leader in front of the fireplace at his office and said he would ask Congress to designate the Persian Gulf nation as a major non-NATO ally.

"After all that effort we put in," a Japanese government official said in disbelief, watching the scene.

Russia's amassing of troops along Ukraine's border has triggered a global chess match over energy, as Moscow threatens to cut off the supply of natural gas to its neighbor and any European country that may block its path. The U.S. is searching for alternative sources of gas, such as Qatar, to assist its European allies. Russia, meanwhile, proposes to supply extra gas to China.

Japan, a resource-poor country, always must be mindful of the risk of energy reserves running low. JERA declined to extend the Qatar contract because it wanted to avoid being too dependent on one Persian Gulf nation. But the Ukraine-Russia crisis and Biden's heavy tilt toward Qatar have caught Tokyo on the back foot and highlighted the difficulty of forging an effective energy and economic security strategy. Gas pipelines at the Atamanskaya compressor station outside the eastern Russian town of Svobodny. The Ukraine crisis could affect the flow of Russian gas to Europe.   © Reuters

There are two reasons Washington is laying out the red carpet for Qatar, a nation of fewer than 3 million people with a land mass smaller than the U.S. state of Connecticut.

The first is Afghanistan. Qatar hosted the Taliban leadership for many years and maintains strong ties to the organization. After a hurried withdrawal from Afghanistan that weakened Biden's approval rating, the White House needs Qatar's help to stabilize the country.

The second is Qatar's status as a top producer of liquefied natural gas, thanks to the offshore North Field, part of the world's largest natural gas field not associated with crude oil. Annual production totals 77 million tons, and the country last year invested $28.7 billion to bolster capacity.

Unlike the oil trade, LNG contracts are typically long term. There is less leeway to ramp up production, and the amount of gas that can be delivered in emergencies -- such as the Ukraine crisis -- is limited. Big producers like Qatar are the only players in a position to help.

Qatar potentially holds a crucial role in Afghanistan and Ukraine, the two international crises draining Biden's political resources. Though the emir's visit simply reflects that reality, some in Tokyo wonder where the U.S. administration's true priorities lie after a year of stressing that the Indo-Pacific, and especially China, is the No. 1 concern.

LNG is Japan's top source of fuel for power generation, leaving the country vulnerable to any contingency in Ukraine. But as Tokyo considers boosting its energy stockpiles, a migraine lingers for decision-makers.

"Just wait until the next crisis. Where will you get your LNG from?" said a disgruntled Qatari minister in December. The comment to a Japanese official came as JERA, for years the world's biggest LNG buyer, decided not to extend the 25-year contract with Qatar at the end of 2021. An LNG ship is moored at a port by a TEPCO power plant in the Japanese city of Futtsu, near Tokyo.

JERA is a joint venture between Tokyo Electric Power Co. Holdings and Chubu Electric Power, which powers the auto-industry-heavy Nagoya region. It was Japan that opened the door for Qatar to become a major energy exporter in 1997, when Chubu Electric started to buy the Gulf nation's LNG. Their relationship had been a honeymoon thereafter. Every Qatari energy minister made it an annual habit to visit Nagoya to pay their respects.

"We will never forget Chubu's bold decision," they would say.

But the launch of JERA and the diversification of the LNG market led to changes. Some Qatari ministers began to whisper that unlike Nagoya, they didn't really want to visit Tokyo, home to the headquarters of TEPCO and JERA.

From JERA's viewpoint, it was time to reduce its overreliance on Qatar. Qatari LNG prices and the country's strict rules on reselling made it unattractive to extend the massive contract, which would have locked in more than 5 million tons of LNG annually from Qatar. Some smaller contracts remain with Qatar, but the mainstay deal was over.

Just as these developments took shape, Afghanistan and the Ukraine crisis pushed Qatar to the geopolitical center stage -- and up the White House's list of priorities.

Officials at Japan's Foreign Ministry and Ministry for Economy, Trade and Industry, which sets the country's energy strategy, cannot hide their disappointment.

"We know we can't blame business decisions by private companies for bilateral relations, but wasn't there a cleaner way to make a break?" one asked. 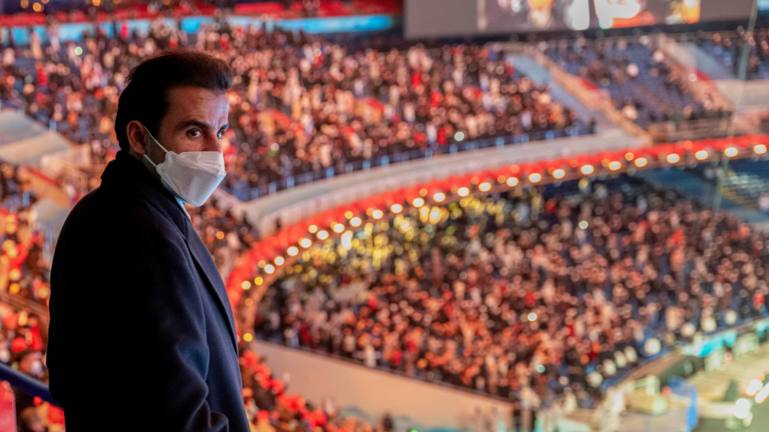 "I wish they had handled the matter better," said another, referring to JERA's snubbing of Qatar.

Qatar was a reliable energy supplier after the March 2011 Fukushima nuclear disaster when all of Japan's nuclear power generators went offline. Tokyo needed LNG to burn at its thermal plants, and Qatar sent large quantities to help.

The Qatari minister's remark suggests there will be no such gesture from Doha if Russia invades Ukraine.

The emir has been busy. Shortly after the White House visit, Sheikh Tamim was in Beijing to attend the opening ceremony of the Winter Olympics.

China is the world's largest consumer of primary energy -- the energy within natural resources such as crude oil, coal and wind before further transformation -- and the country's demand grows yearly. It is widely seen to have overtaken Japan as the top LNG importer last year.

The Olympic opening ceremony on Friday also was attended by Russian President Vladimir Putin and Sheikh Mohamed bin Zayed of the United Arab Emirates, two leaders of other energy-rich nations. Many leading economies avoided sending officials to the Beijing Olympics due to human rights issues, but this was not the case for the world's petrostates.