Carrier deployment to Indo-Pacific will be 'pivotal moment': Johnson Following the meeting on Friday, Johnson's office said, "The Prime Minister expressed his support for the Tokyo Olympics, and welcomed Japanese efforts to ensure the Games can take place safely."

The Japanese delegation went further, announcing that "Prime Minister Johnson stated he was confident the Tokyo Olympic and Paralympic Games would be a success."

The deployment of Britain's HMS Queen Elizabeth aircraft carrier strike group to the Indo-Pacific, which is set to visit Japan later in the year, was also discussed.

"They agreed this would be a pivotal moment for UK-Japan defense cooperation," a spokesperson from Downing Street said. 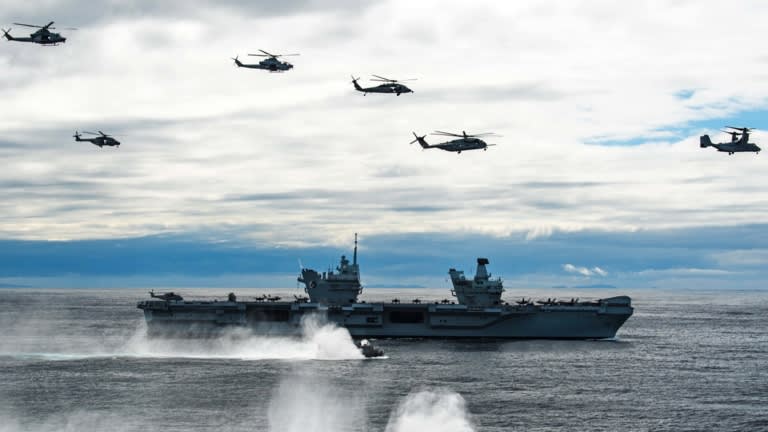 U.S. Navy aircraft fly above the Royal Navy aircraft carrier HMS Queen Elizabeth in the Atlantic Ocean in May. (Photo courtesy of the U.S. Navy)

The prime ministers will accelerate planning toward UK-Japan joint exercises, as well as multilateral ones, according to Suga's office.

The bilateral took place on the sidelines of the G-7 summit hosted by the U.K. in Cornwall. It comes at a key point in British foreign policy, as it shifts its strategic focus to the Indo-Pacific region. In March the government announced a major policy review setting out its intention to work closely with like-minded allies in the region, such as Japan.

As this year's chair of the governing commission of the Comprehensive and Progressive Agreement for Trans-Pacific Partnership, Japan is regarded as an important player in the U.K.'s ambition to join the trade pact as well. The commission's decision on June 2 to start negotiations for the U.K.'s accession was noted by the leaders. Johnson's office said the CPTPP "will further enhance trade links between the U.K. and Japan following the Free Trade Agreement our countries signed last year."

Having left the EU, the British government is keen to fulfill campaign promises to conclude free-trade agreements with new partners across the world, with the CPTPP seen as key.

The leaders also resolved to work together on the global challenges facing the world.