NEW YORK/BEIJING -- China, Germany and France can together assist the development of Africa in a "four-party" framework, Chinese President Xi Jinping proposed to his European counterparts in an online summit.

The idea of quadrilateral cooperation on Africa -- an "Africa Quad" -- came in the form of an invitation to German Chancellor Angela Merkel and French President Emmanuel Macron to join the Initiative on Partnership for Africa's Development, a framework Beijing launched with African countries in May.

Xi's discussion with the German and French leaders on Monday was his first known overseas call after the 100th anniversary of the Chinese Communist Party on July 1. A Xinhua News Agency read out hinted at the Chinese leader's frustration at the Biden administration's efforts to unite allies in the face of a rising Beijing.

The world more than ever needs mutual respect and close collaboration, rather than suspicion, antagonism or zero-sum game, Xi said.

China and Europe should "view each other's differences in a correct way, rationally handle divergences, and ensure ties between the two sides move forward," he said. 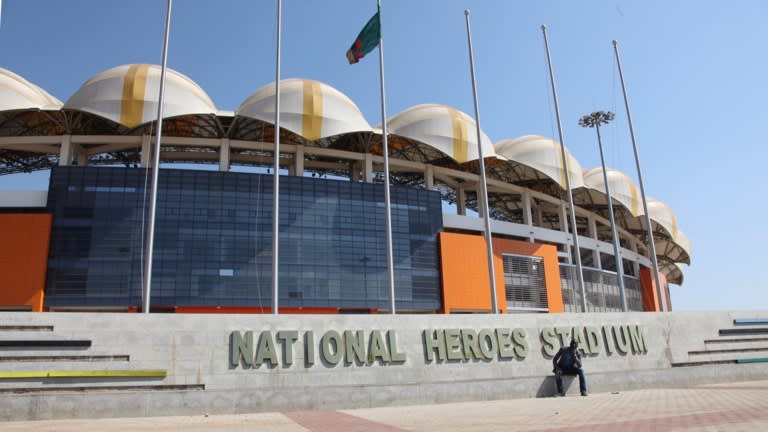 The Chinese-built National Heroes Stadium is seen in Lusaka, Zambia. Beijing has built soccer stadiums across Africa in what is known as stadium diplomacy. (Photo by Ken Moriyasu)

One area of cooperation Xi proposed was Africa. Xi noted that Africa -- with its high concentration of developing countries -- faces the most difficult tasks of fighting the pandemic, but is also "the continent with the greatest development potentials," according to Xinhua.

The Chinese president asked Europe to provide more vaccines to African countries and help the continent cope with debt pressure.

Furthermore, China welcomes France and Germany to join the Initiative on Partnership for Africa's Development and "carry out trilateral, four-party or multiparty cooperation," Xi said.

According to Xinhua, Macron said France is ready to strengthen coordination with China on financing and education issues in Africa, while Merkel said Germany will actively look into the possibility of joining the initiative.

The French and German read outs of the call made no mention of the "Quad" proposal, but the Elysee Palace said France and Germany "welcomed China's commitment to contribute to the restructuring of the debt of vulnerable countries" and noted that "it is now urgent to implement this initiative." 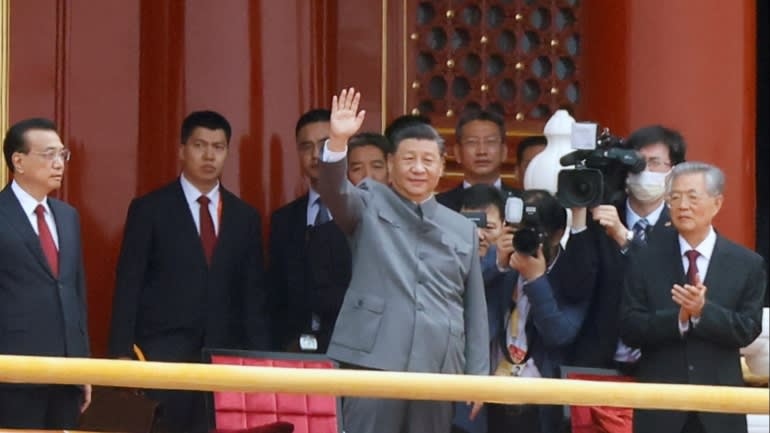 Chinese President Xi Jinping waves next to Premier Li Keqiang and former president Hu Jintao at the end of the event marking the 100th founding anniversary of the Communist Party of China, on Tiananmen Square in Beijing on July 1.   © Reuters

They also called the development of pharmaceutical production capacities in Africa a "priority."

This marked the first three-way call among the leaders since April. It also comes after the Group of Seven nations issued a joint statement highly critical of China's recent actions and also launched a Build Back Better World Partnership to counter Beijing's Belt and Road infrastructure building initiative.

Xi's choice of speaking to Merkel and Macron, but not to British Prime Minister Boris Johnson, could be based on Beijing's read that there is some distance between the two European powers and Washington over how to deal with China. It also comes amid a sharp rebound in German and French trade with China compared with a year earlier.

Both countries have strong economic ties with China. The East Asian nation is Germany's largest trading partner and accounts for roughly 40% of Volkswagen's sales by volume. It is also a key market for French luxury brands and food. 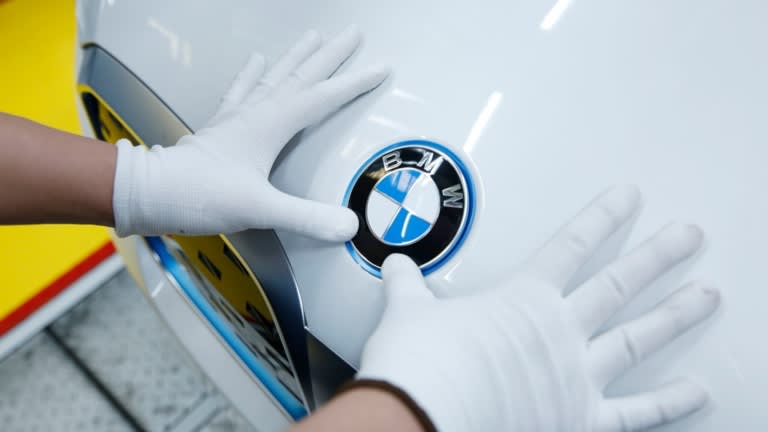 A BMW logo is added to a car made in Shenyang, China. (Photo courtesy of BMW)

Because of this, Berlin and Paris will see the Chinese market as essential to their post-coronavirus recovery, the thinking in Beijing goes. The two European countries' keen interest in environmental policy, especially climate change, could be turned to China's advantage as well.

Xi's outreach to Merkel and Macron comes as Beijing plans to hold the Forum on China-Africa Cooperation in Senegal this year, marking the first time the conference, held every three years, will be held in West Africa. The forum is usually a platform where China unveils a massive investment plan for the continent.

For the Biden administration, matching China's infrastructure commitments in Africa will be difficult. But Judd Devermont, director of the Africa Program at the Washington think tank Center for Strategic and International Studies, says there are ways for the U.S. to lead Africa development.

"We need to be partnering," the former National Security Council director for Somalia, Nigeria, the Sahel, and the African Union said. "The U.S. has an incredible amount of power to convene and to build coalitions and we can work with the Turks, the Emirates, the French the other countries that are doing infrastructure. We can work with the African Development Bank and the World Bank, so we can address what African Development Bank says is $130 billion to $170 billion per year of requirements for infrastructure."

Meanwhile, China is not the only country floating new partnerships in the Indo-Pacific.

At the opening of the three-day summit, Jaishankar said the region reflected the reality of globalization, emergence of multi-polarity and benefits of rebalancing. "It is an expression of our collective interest in promoting global prosperity and securing the global commons."

Separately, Riva Ganguly Das, a top bureaucrat in Jaishankar's ministry, told the summit that India's Indo-Pacific vision envisaged a free, open and inclusive region -- a euphemism often used to counter China's expansionist ambitions. She pointed out that New Delhi, while outlining its vision for the region, has already clearly indicated "the geographical reach of India's idea of the Indo-Pacific, embracing Africa and extending to the Americas, which covers both the Indian and Pacific Oceans."